What’s that big black mark on your tomato? It’s blossom end rot and you need to get calcium into your soil—fast! 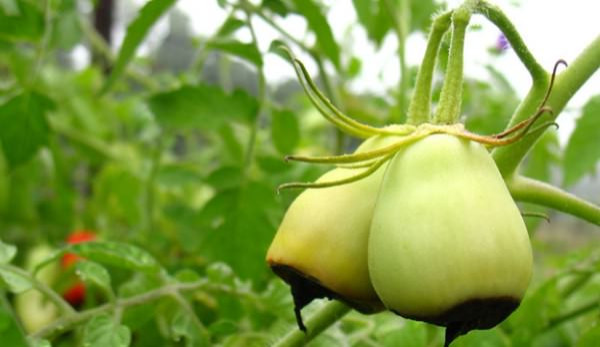 When it comes to diseases that can wreak havoc on fruits and vegetables, blossom end rot is one of the most common—and damaging—problems that hobby farmers face. The Ohio State University Extension estimates that in some cases, up to 50 percent of crop losses can be attributed to blossom end rot.

“[Blossom end rot] is a very common problem, but we see it most often during drought,” explains David Goforth, agricultural extension agent for Cabarrus County in North Carolina.

By learning to spot the disease’s symptoms, you can take step on your farm to remedy the problem and reap a good harvest.

Blossom end rot is a nonparasitc disease caused by a lack of calcium, which affects members of the nightshade and cucurbit families, including  tomatoes, peppers, eggplants, squash and melons. The likely culprit is calcium deficiency in the soil or a low ratio of calcium compared with nutrients, such as nitrogen and potassium. It’s also possible for the soil to contain adequate calcium levels that the plant is unable to absorb. Extreme fluctuations in moisture can also be to blame.

The disease is called blossom end rot because it affects the blossom end of the plant (the part opposite the stem). Most obvious on tomatoes, a small water spot on the fruit is often the first sign of the disease. As blossom end rot progresses, the circular spot gets darker and continues expanding, sometimes consuming more than half of the fruit.

Blossom end rot can be more difficult to spot on melons, Goforth says. Instead of causing a water spot, the tissues of the skin develop a leather-like appearance and the fruit ripens earlier. On peppers, the disease causes tan-colored spots that often appear on the lobes, not the blossom end. It’s often confused with sunscald.

On all crops, blossom end rot is most often spotted on new fruit.

To avoid seeing blossom end rot on your summer crops, testing your soil’s pH level is an important starting point. A soil test can usually be done through your local agriculture department or extension agent.

If you have a low pH, meaning the soil is acidic, adding lime (aka calcium carbonate) to the soil will raise the ph and help prevent the disease. However, if a soil analysis shows the pH is correct, amending the soil with gypsum can help raise calcium levels without changing the ph. Remember, amending the soil to change the balance of nutrients should be done months before planting.

However, if you are already well into growing season when you spot blossom end rot, there’s still hope. Spraying foliage and stems with anhydrous calcium chloride will help get calcium to the fruit immediately. The College of Agriculture and Life Sciences at North Carolina State University recommends applying the solution at a rate of four pounds/100 gallons of water/acre four times per week at the first sign of the disease.

In cases where extreme differences in moisture levels are to blame—such as might be the case in a period of drought—it might be necessary to re-evaluate your irrigation practices.

“Installing a drip irrigation system will provide regular water and keep the plant from going into stress,” Goforth says.

Unfortunately, when you notice blossom end rot on your crop, that fruit is ruined. Remove it from the plant and toss it.

“The fruit has a poor quality taste and is unsellable,” Goforth says.

While blossom end rot spoils fruit, it doesn’t have to ruin the entire crop. Once the affected fruit is removed, pH and calcium levels are tested/adjusted and plants are receiving adequate water (without overwatering) the next fruit sets shouldn’t be affected.