Similar to the Galloway, the Belted Gallowy is distinguished by its striking "Oreo" pattern. They're an excellent meat breed for cooler climates. 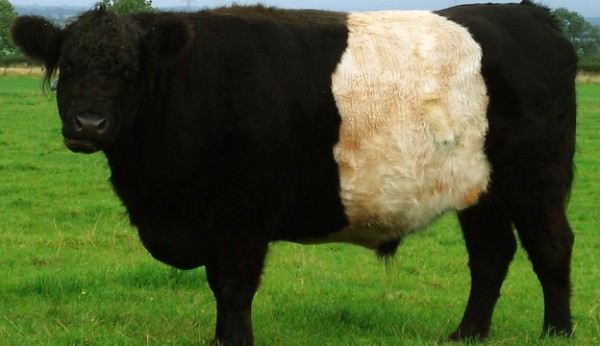 Use: Belted Galloways have similar uses to the Galloway. They’re efficient grazers and browsers, making them ideal for forage-based beef production. Their beef is flavorful and noted for well-marbled carcasses with large ribeyes and very little internal fat. And, due to their protective nature, a few Galloways in a pasture are as effective as donkeys or llamas for guarding sheep and goats from wandering dogs. Photo by Rhoda Peacher.

History: Galloway cattle originated in the Scottish Lowlands in the six shires that made up the Province of Galloway. Records indicate that most early Galloways were black but red, browns, and brindles, with or without white markings were also fairly common. A separate American registry for Galloways of the belted variety (the United States Belted Galloway Society) was founded in 1951, although the American Galloway Breeders Association also registers Fullblood, Belted, and White Galloways in separate herd books. Belted Galloways are thought to have risen from crossing black Galloways with Dutch Belted cattle.

Conformation: According to the U.S. Belted Galloway Society, Belted Galloway can be black, red or dun in color. A complete belt should encircle the midsection of the body, between the front and rear legs. Skin should be moderately thick. Hair coat should have two layers, a short undercoat covered by a long shaggy coat that protects the animal. Cattle should be moderate in size. The head should be broad with the poll low and flat.

Special Considerations/Notes: Galloways are friendly, docile cattle; even bulls are noted for their calm demeanor. Cows are milky, maternal, and long-lived, with a well-deserved reputation for getting in calf every year. And, though Galloways are a quintessential hardy, Northern breed, they adapt well to Southern climates too. Belted Galloways are listed on the American Livestock Breeds Conservancy’s conservation priority list under the Recovering category.