Benefits Of Probiotic B. Apis On Malnourished Bees

New findings could mean access to powerful nutritional supplement in the form of probiotic microbe B. apis for honeybees to bolster strength. 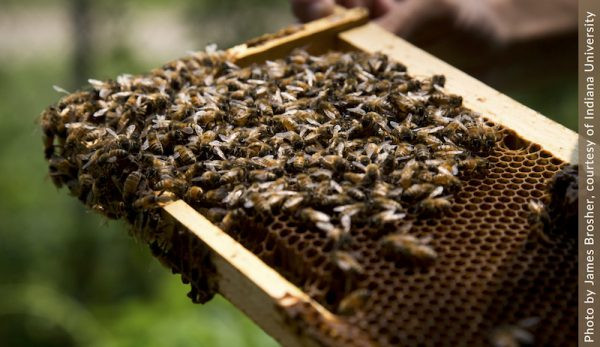 Honeybees don’t always get the nutrition they need. Finding rich sources of pollen and nectar when they need it most can be especially difficult. This, in turn, affects their ability to ward off pathogens and pests.

But Indiana University researchers recently published findings in the International Society for Microbial Ecology Journal that could be a game-changer for beekeepers and honeybees. In â€śHoney bee symbiont buffers larvae against nutritional stress and supplements lysine,â€ť IU biologists reveal findings about a beneficial probiotic.

The microbe, Bombella apis, can survive in royal jellyâ€”a generally inhospitable substance. It can also live in sugar solution for more than 24 hours. That means beekeepers might be able to add B. apis as a nutritional supplement for their bees in the future.

Read more: Check out these 5 guidelines for feeding bees.

IU Department of Biology Professor Irene Newton led the study. In a recent news release, she noted, â€śWe’ve changed the way we use our land in the U.S. Now we have tons of monoculture crops like corn, which are wind-pollinated and therefore no use to bees, covering acres and acres of land. Other crops that bees do pollinate grow in monoculture as well, limiting the options for bees.â€ť

Newton continued, â€śThe effects of poor nutrition are most damaging in the developing larvae of honeybees, who mature into workers unable to meet the needs of their colony. It is therefore essential that we better understand the nutritional landscape experienced by honeybee larvae.â€ť

Turns out, the B. apis microbe could be an important part of that landscape. Newton and her colleagues fed malnourished bees the probiotic microbe. And the result?

â€śWhen we limited bee nutrition during [larval bee] development, we saw a drop in mass for the bees; bees were much smaller than their control counterparts,â€ť Newton explained.

â€śWhen B. apis was added to these same bees, although they had poor nutrition, they reached the same mass as control bees given full nutrition. The microbe was able to make up for the poor diet. This suggests that B. apis could be added to colonies as a probiotic to protect from nutritional stress.â€ť

The researchers also determined that B. apis affected the amount of some amino acids in the diet of larval bees. In particular, it increased the amount of lysineâ€”one of several amino acids essential for honeybee health. (Previous research has revealed that the mass of adult bees suffers when their diets lack lysine.)

In the recent International Society for Microbial Ecology Journal article, the authors write, â€śMany commercial crops which rely on honeybee pollination services only barely meet an adult beeâ€™s minimum lysine requirements…. It is easy, therefore, to imagine a scenario where a honeybee colony must rely on mutualistic bacteria such as B. apis to fill in the nutritional gaps in the larval diet.â€ť

Read more: Beekeeper (and TikTok star) Erika Thompson of Texas Beeworks is all about her bees.

Insectsâ€”and larger animals, tooâ€”routinely rely on so-called mutualistic bacteria. The study’s authors specified, â€śBacterial symbionts can have dramatic effects on animal hosts, including nutrient supplementation of incomplete host diets, protection from parasites and pathogens, and providing developmental cues. Many [organisms] rely on bacterial partners for fundamental aspects of their metabolism, such as providing key nutrients absent or insufficient in the host diet.â€ť

That may be just what’s happening in the case of B. apis. â€śB. apis appears to be shunting its metabolic energies into production of the essential amino acid lysine, which may be particularly valuable to developing larvae,â€ť the authors add.

However, it’ll take more time and study to link that lysine secretion with direct, nutritional benefits to larval bees.

Newton and her colleagues also maintain that other bacteria, such as Lactobacillus kunkeei, could benefit bees in certain ways. Like B. apis, L. kunkeei also can survive in some royal jelly environments. It’s possible that both of these microbes could be working together to benefit bees.

Or, for its part, L. kunkeei might provide specific benefits on its own.

Of course, Newton suggests, there are still plenty of unanswered questions around B. apis all by itself. â€śWe are excited to explore the other interactions that B. apis has in a colony, to better understand what it’s doing in different environments and the role it plays in association with honeybee queens,â€ť she said.