Berkshire pigs are an excellent choice for farmers who want to raise heritage livestock with a taste consumers appreciate. 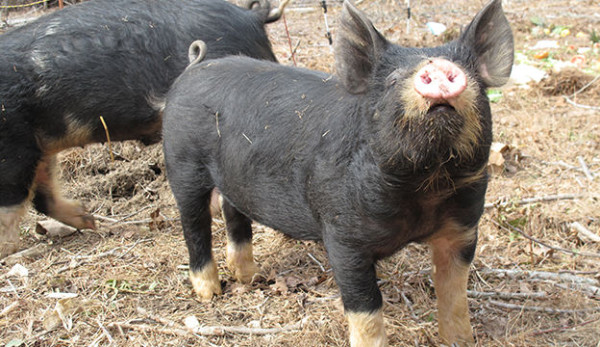 Berkshire pigs are an excellent choice for farmers who want to┬Āraise heritage livestock with a taste consumers appreciate. Not so very long ago, almost every farm had a few pigs, which were often dubbed ŌĆ£the mortgage lifterŌĆØ thanks to their easy profit potential.

But in recent decades, pigs moved from the farmstead to the┬Āfactory farm, as small-scale farmers couldnŌĆÖt possibly compete with corporate operations with 1,000 or more animals raised under one roof.

Small-scale farmers are once again finding that there are potential profitsŌĆöand lots of excellent┬Āmeat in keeping pigs: The trick is to keep niche breeds that produce higher-quality meat and to market directly to consumers (and chefs) who are interested in taste, humane treatment of animals and better stewardship of the environment.

One of the pig┬Ābreeds that farmers are finding to work well for these consumers is the Berkshire. This pig is hardy, has good mothering capabilities and performs very well outdoors, especially when grazing on pasture. This pig breed’s meat is darker than commercial pork and far more flavorful than the pork found in your grocery-store freezer.

Very deep-sided with a strong, uniform arch of back and muscular, firm build. Short neck and short, blocky legs with strong feet.

Relatively short snout. Seen from the side, the face has a slight dish-shape with a large jowl and an upturned nose. Ears are medium-sized and erect.

Medium to large animals, around 600 pounds at maturity.

Berkshire pigs┬Āare one of the oldest identifiable breeds. These black pigs, with white ŌĆ£pointsŌĆØ (white areas on their feet, snout and tail) were documented in the English ŌĆ£shire of BerksŌĆØ more than 350 years ago and made their way to the United States in the early 1800s. In 1875, breeders formed the American Berkshire Association, making it the first breeders group and swine registry in the world.

Pigs come in two essential typesŌĆöthe lard type and the bacon type. As the name suggests, lard pigs produce higher concentrations of fat, which traditionally was rendered for cooking and the production of lubricants. These pigs are compact, with thick muscling, short legs and deep bodies.

Through the end of World War II, the market for lard (a key ingredient in products ranging from cosmetics to explosives to pharmaceuticals) was strong, but after the war, cheaper vegetable-based fats found their way into American diets and petrochemicals largely replaced lard for commercial and industrial uses. The declining market for lard caused demand for lard pigs to collapse and breeders began selecting for leaner hogs.

Initially the Berkshire pig breed┬Āthrived, thanks largely to its exceptionally tasty meat, but as the pork industry consolidated under the control of just a handful of large corporations in the 1980s and 1990s and efficiency of production became the name of the game, the Berkshire population plummeted. The ŌĆ£pork industryŌĆØ simply wasnŌĆÖt interested in Berkshires because they were slower growing, didnŌĆÖt produce as much lean meat (which the industry believed was the only thing consumers would buy) and didnŌĆÖt perform as well in confinement as the Duroc,┬ĀHampshire and Yorkshire pig breeds.

Despite these setbacks, some independent farmers who were members of the ABA kept breeding registered hogs.

Thanks to this consumer-driven demand for good meat, Berkshire numbers are again climbing and there is opportunity for small-scale producers to profit from these pigs.

Responding to the Consumer

Although Steve Atkinson is a dentist, he and wife, Holly, reared their children, Julie and David, on a farm in the 1980s. Steve AtkinsonŌĆÖs practice was the familyŌĆÖs main income source, but the farm was still a serious endeavor: Holly Atkinson milked a herd of 26┬ĀJersey cows and sold the┬Āmilk commercially.

When the kids grew up and went off to college, the Atkinson’s sold the farm to take some years off for travel, but in 2000 they began thinking of buying another farm to enjoy a rural retirement. Then, Julie, David and DavidŌĆÖs wife Kindra, found that corporate life didnŌĆÖt suit them, so the family banded together to create a small commercial farm.

ŌĆ£Our whole philosophy has been to engage in traditional family farming, but to find new niches,ŌĆØ Holly Atkinson┬Āsays. ŌĆ£We have always been interested in heritage breeds and the older breeds of livestock. We donŌĆÖt feel like bigger is necessarily better, or that ŌĆśnew and improvedŌĆÖ breeds are necessarily better.ŌĆØ

With a good bit of research to back up their decisions, they selected Berkshires as the hog for Greenwood Farms. (They also raise and direct-market rare breeds of cattle, horses,┬Āsheep and poultry.) Steve Atkinson┬Āloves to do research and he quickly discovered that the Berkshire is the top choice for pork in Japan.

ŌĆ£The Japanese are quite the gourmands when it comes to pork, so we took that as a good sign.ŌĆØ

Mike Telford also talks about the Japanese interest in Berkshire pork: ŌĆ£In Japan, you donŌĆÖt have to educate consumers about BerkshiresŌĆöjust walking up and down the grocery store aisle you can see that they really understand what the product is and what the meatŌĆÖs qualities are. Kurobuta, which is 100-percent Berkshire meat, is much prized by the Japanese; that preference goes back 300 years or more. Part of the preference is cultural; the Japanese have always preferred dark meat from black pigs because it is seen as healthy and healing [you wouldnŌĆÖt go there and promote ŌĆśthe other white meatŌĆÖ].ŌĆØ

What do the Japanese consumers already know about Berkshire quality that American consumers are just rediscovering? In a word, taste. Berkshires marble well so the meat is naturally juicy and flavorful with exceptional texture.

In fact, according to Telford, in tests for sensory qualities (or eating characteristics) performed by the National Pork Producers Association, Berkshires are the hands-down winners, coming in first overall and ranking above all the other breeds in 19 of the 24 tests NPPA performs in its assessment.

Chefs are becoming major promoters of Berkshires in the U.S. Tom Boyce, Chef de Cuisine at Wolfgang PuckŌĆÖs flagship Beverly Hills restaurant, Spago, is one of the BerkshireŌĆÖs fans.

ŌĆ£I love the richness of the Berkshire porkŌĆöand the fact that most farmers raising them are treating them better and doing a better job for the environment than the commodity-pork producers. They are raising them in an artisanal fashion.

ŌĆ£It is the only kind of pig we use here at Spago,ŌĆØ Boyce says. ŌĆ£And we have it on the menu at least a couple of times per month. The response is always excellent; everyone absolutely loves the flavor.ŌĆØ

For farmers, like the Atkinsons, who direct-market their products, the flavor really does help sell the meat to more than just five-star chefs.

ŌĆ£There are generally two kinds of pork on the market,ŌĆØ Holly Atkinson┬Āsays. ŌĆ£One has no flavor and is watery, and the other has really thick fat on the outside, but no marbling in the middle, so itŌĆÖs dry and course. With the Berkshires you get a nice edge of light fat and a little marbling, so it has good, juicy flavor throughout.ŌĆØ

The Atkinsons mainly sell their meat via the Internet. They have an email list of more 400 people and customers who come┬Āfrom near and far to purchase their tasty pork. One of their regulars lives in San Francisco and pays nearly as much for shipping as he does for the meat, but he wants the quality and is willing to pay.

ŌĆ£We get a good price from people who are seeking naturally raised products. We are doing brisk sales of our grassfed beef and lamb, but our pork marketŌĆöwhich is still a small enterpriseŌĆöis growing faster than our other enterprises.ŌĆØ

Interestingly enough, the Atkinsons truly started out on a small scale and continue with a slow and steady pace. They purchase six Berkshire feeder pigs (just-weaned piglets) at a time from a certified-Berkshire producer. They are growing their operation gradually as the market for their product grows. Sold by the pound, they have jumped through hoops to have their meat processed and labeled in a USDA-inspected custom packing plant.

Peggy Miller and her sister, Sally Grimes, are another family engaged in a small-scale swine operation.

ŌĆ£I actually got my first weaner pig as my 15th birthday presentŌĆöjust what every girl wants,ŌĆØ Miller says with a chuckle. She kept pigs through high school, mostly Spots and Yorkshires. As a young adult, Peggy got out of keeping pigs while she went to college, but after she graduated, her mother talked her into getting some again. That was 1987; she bought a bred-Berkshire gilt (a young female pig that has not yet had piglets) at the Oregon State Fair and has stuck with Berks ever since.

Today Miller and┬ĀGrimes raise Berkshires (and Karakul sheep) year-round on a small plot of land right in Salem, Ore., the stateŌĆÖs capitol with a metro-area population of almost 300,000. Unlike the Atkinsons, they sell all their piglets as feeder pigs.

ŌĆ£I donŌĆÖt grow my own feed, and I donŌĆÖt have bulk storage, so I have to pay top-dollar for it,ŌĆØ Miller explains. ŌĆ£For the most part that makes it more profitable for me to sell pigs off the sow, rather than trying to raise them for meat. I sell to individuals who want to feed them out for family meat production and for 4-H projects.ŌĆØ

ŌĆ£They are rugged and reliable animals,ŌĆØ Holly Atkinson says. ŌĆ£They take well to┬Āpasture life, getting a lot of their own feed from grazing and digging for acorns.ŌĆØ

The Atkinsons also feed some local, naturally raised corn and milk from three Jersey cows milked for family use and for┬Āmaking cheese.

Not only are they hardy and active foragers, Berkshire sows are also excellent mothers. With decades of breeding sows and farrowing out litters, Miller quickly attests to their mothering ability: ŌĆ£In all the years I have worked with them, I have only had one bad mother. Sometimes a gilt will be a little nervous the first time, but other than that they just lay down and have their babies. They are really calm. Sows are great milkers, so the piglets grow quickly.ŌĆØ

Berkshire litters tend to be a little smaller than some of the commercial crossbreds, but Miller says she averages eight to 10 piglets per litter, though she has had some sows farrow as many as 16.

ŌĆ£Personally, I donŌĆÖt like huge litters,ŌĆØ she says. ŌĆ£I would rather have eight to 10 pigs that are big, uniform and healthy than 14 pigs with some runty ones that need nurse-maiding.ŌĆØ

Miller also explains that the Berkshires have a slightly longer gestation, which she feels is a benefit.

ŌĆ£The Berkshires go about 116 days, whereas the Yorkshires normally go 112 days. I think they come out more vigorous thanks to the extra time they spent in the womb.ŌĆØ

Thanks to their black coat, Berkshires offer another advantage: They donŌĆÖt tend to get sunburned like light-colored pigs.

All in all, if you are looking for a good pig for a small-farm enterprise or you just want to eat your own pork like Grandpa used to raise, then the Berkshire might be the breed for you.

This article first appeared in the September/October 2006 issue of Hobby Farms magazine.

Carol Ekarius is a Colorado-based author, freelance writer and consultant to the nonprofit and governmental sectors. Her main areas of interest include agriculture, environment and natural resources, food, and lifestyle. Contact her at http://carolekarius.com.