The black and white Berkshire has long been known for its excellent meat. It's becoming more popular as a niche breed among small farmers. 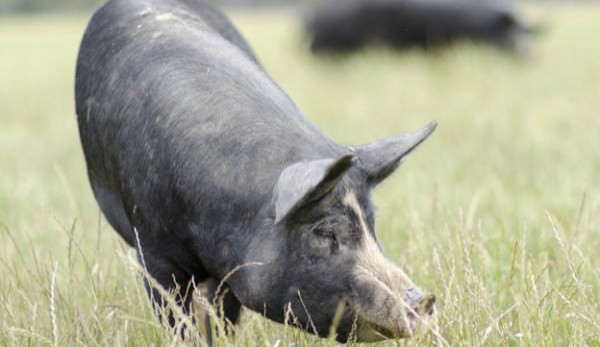 Use: Berkshire pigs are known for their darker, exceptionally tasty meat. Though not as popular among larger farms as they used to be, they are becoming a popular niche breed for small farmers. In tests for sensory qualities (or eating characteristics) performed by the National Pork Producers Association (NPPA), Berkshires have been the hands-down winners, coming in first overall and ranking above all the other breeds in 19 of the 24 tests NPPA performs in its assessment.

History: Berkshire pigs are one of the oldest identifiable breeds. These black hogs, with white â€śpointsâ€ť (white areas on their feet, snout and tail) were documented in the English â€śshire of Berksâ€ť over 350 years ago and made their way to the United States in the early 1800s. In 1875, breeders formed the American Berkshire Association (ABA), making it the first breeders group and swine registry in the world.

Conformation: Black with white points (legs, face and tail) and pink skin, Berkshires are very deep-sided with a strong, uniform arch of back and muscular, firm build. They have a short neck and short, blocky legs with strong feet– and a relatively short snout. Seen from the side, the face has a slight dish-shape with a large jowl and an upturned nose. Ears are medium-sized and erect. The medium to large animals, around 600 pounds at maturity, they have an excellent disposition, are friendly and curious.

Special Considerations/Notes: Not only are they hardy and active foragers, Berkshire sows are also excellent mothers, averaging eight to 10 piglets per litter.