The farmers at BF Farm in Huggins, Missouri, use rotational grazing for cattle, goats and pigs for a healthy pasture and hardy livestock. 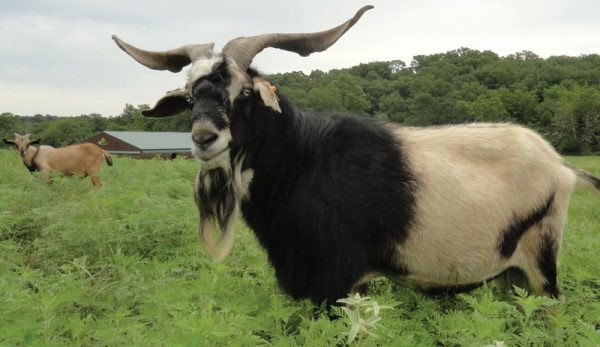 The numbers are impressive: 200 acres, three species of livestock, 14,000 feet of goat fencing and 23 gates. Itâ€™s all for a sustainable grazing technique managed by two dedicated and knowledgeable farmers, working a rotational grazing formula that makes for an innovative and successful livestock venture.

BF Farm in Huggins, Missouri, is owned and operated by Mark Bengston and Jodey Fulcher. They are top-notch breeders of Black Hereford cattle, Kiko goats and Kunekune pigs. All three species enjoy rotational grazing through pastures at BF Farm.

Mark and Jodey have found an approach that maximizes food availability, reduces parasite risk and promotes health for each animal while effectively managing the natural resources of the land.

While Mark grew up in New Jersey and had never farmed before, Jodey grew up in Georgia and spent summers learning and working on his grandparentsâ€™ farm. An uncle gave Jodey his first goatâ€”a Saanen buck that had been won in a poker gameâ€”and his grandfather got him started with chickens.

Jodeyâ€™s early farming experiences influenced the choices he made starting a small farm with Mark.

Read about one family healing their land through regenerative agriculture.

From Garden to Farm

Together since 2006, Mark and Jodey first lived on a Georgia property that they enjoyed. An avid gardener, Mark enthusiastically planted their entire yard.

Eventually, he longed for more space to garden. Jodey suggested they look for a small farm. Intrigued by the idea, they found and bought a 35-acre farm in Cave Spring, Georgia, in 2013.

When Mark and Jodey moved to the farm, they started with a small mixed-breed herd of goats. Slowly, Jodey redefined the makeup of the herd. He narrowed his focus and commitment to Kiko goats.

Jodey began to develop a name for himself and the farm with the quality of Kiko goats he produced.

Soon they were researching other livestock species. This led them to learn more about Kunekune pigs and Black Hereford cows.

Both species would eventually take up residence on their farm. Mark and Jodey realized they would need more land to focus on the kinds of livestock they wanted to manage and the rotational grazing systems they admired. With a commitment to raising registered livestock and a vision of quality over quantity, they began scouring the country for the right farming location.

After a nationwide search, Missouri proved to offer the most economical option in terms of quality grazing land and availability.

BF Farm comprises 200 acres with 50 acres fenced to create the 12 pastures for goats and pigs. The remaining 150 acres provides rotational grazing for the cattle.

Choosing this space is consistent with the mission of BF Farm. Through advanced research, meticulous record keeping and a dedication to excellence in care, breeding and maintenance, the pair raised animals that are financially productive.

â€śWhen we bought this farm, Jodey had about 30 goats and we had a dozen head of cattle,â€ť Mark says. â€śWe are in our third year here and have grown to over 50 head of cattle, 40 goats with the anticipation of 80 offspring this year. And we have five reproducing sows.â€ť

The move to Missouri has provided improved animal health while supporting the sustainable rotational grazing practices Mark and Jodey wanted to implement.

The farm is laid out like the face of a clock. About 50 acres are designated for the goats and pigs with fencing and gates to allow animals to be moved from pasture to pasture. During the summer months, animals are moved on a weekly basis through pastures ranging in size from 2 to 10 acres.

The pasture rotation maximizes food resources for each species without overgrazing the land, promoting animal health.

â€śEach animal has parasites specific to their species,â€ť Jodey says. â€śOne of the biggest expenses when raising goats commercially is deworming. Rather than pouring chemicals into the animals, we move them through the pastures and produce healthier individuals.â€ť

Mark said theyâ€™ve created an environment that doesnâ€™t contain enough animals for the parasites to complete their life cycle.

The animals move in a clockwise rotational grazing system from pasture to pasture. The way the farm is laid outâ€”with the addition of gates and fencingâ€”allows the animals to be moved from one pasture to another each week.

Not only are the animals protected from parasites this way, but rotational grazing ensures the land is never overgrazed as each species consumes something different while in a single pasture.

The cows also move through their own pastures in a low-stress migrationâ€”not a hectic cattle drive. Movement of the livestock results in built-in rest periods for each pasture.

The pastures are a mix of native grasses and forbs and have been overseeded with fescue, orchard grass, timothy, Bermuda, clover and other types of grasses over the years. There are also small wooded areas in each pasture that provide a variety of scrubby plants such as buck bush, blackberry, multiflora rose and saplings.

â€śThe animals come in, eat, fertilize. And then after they leave, the pasture recovers, grows and is ready for them when they return,â€ť Jodey says.

Missouri has some of the lushest grazing land in the country, and the area Mark and Jodey picked is some of the best in the state.

They have not needed to intentionally overseed but recognize that the livestock might be overseeding and reseeding in the process of moving. And, at the height of the growing season, they do use tractors to cut because there is too much for the animals too eat.

In preparation for the winter months, Mark and Jodey designate 40 of the 150 acres for stockpiling. These acres will be held back from the rotation starting in August. Allowed to grow for the remainder of the season, the acres provide winter grazing for the livestock.

One of the largest expenses in keeping livestock is purchasing or producing hay. Stockpiling is a cost-effective approach. BF Farm doesnâ€™t have to own and maintain the equipment to cut and bale hay or purchase it to get through the colder months.

Mark and Jodey Kiko carefully researched and selected their goats, Kunekune pigs and Black Hereford cows. Markâ€™s specializes in the Kunekune pigs, while Jodey focuses on the Kiko goats.

Their areas of expertise include conducting research in the early stages of species selection, speaking with customers and fellow breeders, and daily care and needs.

Jodey manages most of the farmâ€™s paperwork. The men share in the responsibility for the cattle. Of course, if animals need handling, it’s generally a two-person job.

These Goats originated in New Zealand, evolving from feral crosses.

Kiko means â€śmeatâ€ť in Maori. The goats mature quickly for meat production and do well in the wetter climate of the Midwest. Kikos are hardy, and the females are good mothers. The breed has not been as overmanaged as other goats, and Jodey chose them for their high level of parasite resistance.

They tolerate plants with higher levels of tannins than the other livestock can. Because goats prefer different browse than cattle, the two species donâ€™t compete for the same resources.

These pigs also hail from New Zealand. They nearly went extinct in the 1970s, but conservation efforts helped them recover. They expanded to Great Britain, Europe and the United States as well as Canada.

Kunekunes attract attention because they are ideal for smaller farms, as well as farms focused on sustainability. They enjoy an increasing popularity among chefs, charcutiers and home butchers.

Friendly, docile and easy to handle, the pigs sport a short-upturned snout adapted more for grazing than rooting. The pigs can fatten on grazing and as a result boast a low fat-to-meat ratio.

Their natural habitat is woodlands and pastures, and they are excellent animals to maintain, manage and eradicate unwanted pasture weeds. Their effectively consume weeds without damaging soil.

Kunekune have very lean meat because they dine on 90 percent pasture grazing and little grain. They never eat slop, Mark says. They grow to 220 to 300 pounds and fit in well on smaller farms.

The pigs sell as meat and for pets.

Check out the kunekune pigs living on Geraghty’sÂ MicroÂ Farm.

These animals have a docile temperament, high-quality meat production and beautiful black hides, making the breed attractive in recent years. The cowsâ€™ low-key and calm personalities made them an excellent choice for BF Farmâ€™s pasture practices.

Cattleâ€”along with the other speciesâ€”get DNA tests to ensure quality and credibility with each individual. Mark and Jodey trace their weights from birth, selectively maintaining weights with a focus on raising animals that provide good breeding stock.

â€śCattle are an interesting science,â€ť Mark says. â€śWe are guaranteeing that our cattle are 100 percent homozygous. They will always throw a black polled calf.â€ť

One of the registered animals sells for about four times the price of a commercially raised animal.

The cattle primarily sell as breeder stock because Mark and Jodey follow such a stringent program of each animalâ€™s health. They are weighed at birth, at weaning and as yearlings. If they donâ€™t meet the baseline weight numbers, registration doesn’t happen.

BF Farm also houses a flock of guinea fowl that consume as many ticks as possible. The trained flock stays close to the barn and areas where the animals sleep. Ticks pose a health issue for the other livestock, so it’s necessary to have something that will consume them.

A flock of chickens produces enough eggs for people, pigs and the dogs that live and work on the farm. The eggs help Mark and Jodey keep costs lowâ€”using them as an additional source of protein.

Five Great Pyrenees dogs work on the farm. Each dog lives with a different goatherd serving as protectors. (One of the younger dogs bonded with the pigs.)

The dogs bond with their herd, and the livestock know them as their guardians. They are critical to keeping the herds safe from coyotes. The dogs also help mitigate the increasing number of black vultures in the areaâ€”barking until the birds move on.

Overall, Mark and Jodey stay focused on strategies of diversification and rotation. They are committed to their model and to promoting it as an option for other small farming operations.

Their philosophy reflects a pledge to sustainable practices that focus on health and well being for each species of animal and the land itself.

This article originally appeared in the September/October 2019 issue of Hobby FarmsÂ magazine.