Head brewer Jon Kielty talks about using hops, grains and honey from local sources, some within a few blocks of the New York City brewery. 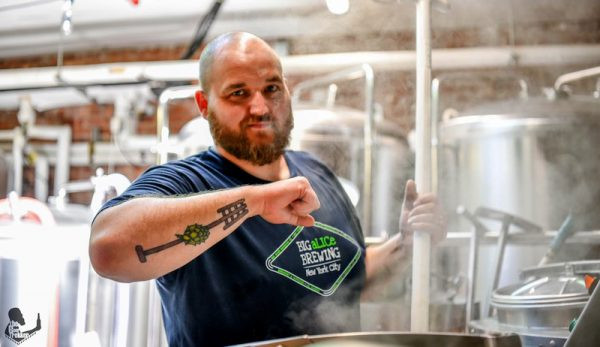 Craft beer is worldwide phenomenon, but its roots are very much ingrained at a local level. Independent breweries help serve the needs of the immediate community, and sourcing from local farms keeps the beer-making process sustainable. Based in Queens, New York City, Big Alice Brewing is a craft beer enterprise that’s at the forefront of pioneering hyperlocal and sustainable brewing practices, not least by committing to becoming something known as a New York State Farm Brewery.

Taking time out from his hops duties, head brewer Jon Kielty spoke to us about forging relationships with small farms, how beer and bees can help each other, and the benefits of using native ingredients in their brews.

Big Alice is certified as a New York State Farm Brewery. “It’s geared toward boosting agriculture, and it incentivizes brewers to source local New York state ingredients,” says Kielty. Originally, being a New York State Farm Brewery meant that 20 percent of your hops and 20 percent of your malt had to be grown within the stateâ€“but from 2019 those numbers were increased to 60 percent. (Starting in 2024, the requirement will be 90 percent of ingredients.)

Each month we're going to be taking the opportunity to feature one of our local partners we work with. This month we're featuring @nyhopguild! Founded by Chuck Rhoades of @willethop and Chris Holden of @crookedcreekhops, partnering up to bring a larger market foot print to the New York and Northeast Brewing Scene. They have partnered with 6 farms now in New York and traveled around the globe to â€śHand Selectâ€ť hops from the worlds best in other growing regions as well. @nyhopguildâ€™s goal is to help bridge the gap between the high quality farms in New York and the highly talented Brewers here in the state as well as provide them with world class hops from our partner farms from around the world. Their business opened in September 2018, after nearly two years of planning and conversation between growers, processors and equipment manufacturers from New York and the Midwest. They now work with almost 20 different farms around the world including New York, Michigan, Washington, New Zealand, Germany and Slovenia. Our brewers Jon and Dom visited @nyhopguildâ€™s new warehouse this past weekend, as well as one of the farms they work with, and weâ€™re so proud to be a part of this close knit community of NYS Hops.

Showing the success of sourcing locally, the brew in question took the gold award in its category at 2019’s New York State Craft Beer Competition.

â€śCarrots are divine, you get a dozen for a dime, itâ€™s maaaaagic!â€ť -Bugs Bunny TOMORROW (3/21), Whatâ€™s Up, Doc?, our collaboration with @rockawaybrewco, a Tart Farmhouse with Carrot ? and Ginger, will be on draft in our taproom! You donâ€™t want to miss this one, folks, and they say carrots are good for your eyesight, so basically youâ€™ll have super powers to get through wint… uhh, Spring Storm Toby âť„ď¸Ź â›„ď¸Ź ? tomorrow! Stay safe! #whatsupdoc #melblanc #beerfriends #neighbors #longislandcity #farmhouseale #collaboration #carrot #ginger #collab #rockawaybrewingcompany #bigalicebrewing #snowstorm #winterstorm #springstorm #snow

Tapping into the brewery’s strong relationships with New York farms, Kielty says Big Alice is particularly proud of the beet pilsner and carrot and ginger tart farmhouse brews it has created with produce from Alewife Farm in Kingston.

Thank you @nationalhoney board! Our head brewer, @the_brewed_abides was selected to attend the 2019 Honey Beer Summit in St Louis. What a great event! It was great to hang out and network with a lot of other talented brewers from around the country, and weâ€™re excited to continue working with honey here in nyc. Thanks for the hospitality @perennial, @urbanchestnut, and @sideproject! #nycbrewed #bigalicebrewing #madeinqueens #madeinnyc #brewery #bar #taproom #craftbeer #community #craftnotcrap #properglassware #longislandcity #industrycity #barrelroom #drinkindependent #thinknydrinkny #nationalhoneyboard

Brewing with honey is another promising way for craft breweries and farmers to collaborate. “We work with local master beekeeper Tom Wilk of Wilk Apiary to source New York honey for our beers,” says Kielty. He adds that Big Alice Brewing’s honey wit brew took gold in the National Honey Board Honey Beer Competition.

A couple of times a year, Big Alice Brewing produces a limited amount of beers that spotlight honey grown on a rooftop just two blocks from the breweryâ€”and Kielty himself can sometimes be seen assisting with honey harvesting. The rooftop hives are an opportunity that came about because of Big Alice’s relationship with the nearby Hellgate Farm.

Each month we're going to be taking the opportunity to feature one of our local partners we work with. This month we're featuring @HellgateFarm ! Hellgate Farm is a network of residential and rooftop gardens in Astoria and Long Island City Queens whose goal is to work to connect people with nature and each other through teaching hands-on skills and growing nutrient-dense foods that nourish our community. They started as an urban garden in 2011 in a residential backyard in Astoria and the next year expanded to another backyard as well as an industrial rooftop space. They continue to build gardens in previously unused or underutilized spaces in Northwest Queens through partnerships within the neighborhoods. They currently run a CSA, a farmers market at Socrates Sculpture Park, and a neighborhood food scrap drop-off site to make compost . In addition to this, they work to educate hundreds of people in hands-on skills from gardening to carpentry and collaborate to create some amazing hyperlocal small batch products such as their famous hot sauce. More recently, they have begun to focus on accessibility and food justice. â€śWe do this work because we are passionate about creating solutions in an era of many environmental and social challenges.â€ť We have been proudly working with Hellgate Farm for over a year and feature their locally grown produce in small batch beers and one off casks. For more information on our friends at Hellgate Farm, check out their website https://www.hellgatefarm.com/ #nycbrewed #bigalicebrewing #madeinqueens #madeinnyc #brewery #bar #taproom #craftbeer #community #craftnotcrap #properglassware #longislandcity #industrycity #barrelroom #drinkindependent #thinknydrinkny #hellgatefarm #localingredients #partnership #csa

“Hellgate Farm is a local urban rooftop garden located just blocks from our brewery,” says Kielty, highlighting the way craft beer and farming connections can expand to form a tight network: “I believe we were first linked up with them through our beekeeper, Wilk Apiary. Our first collaboration with Hellgate was giving them spent grain, which they used for compost when building out their planters on the rooftop.”

The Future of Craft Beer and Local Farms

Kielty says sourcing local ingredients is becoming more important in the craft beer world. He says fostering “long lasting personal relationships” helps bring about “a better understanding of where our ingredients come from.”

Earlier this year during hop harvest, Kielty and another Big Alice brewer, Dominic Sims, went upstate to visit the farms they source their hops from, which includes Chimney Bluffs Hoppery and Pedersen Farms. “To walk through the hop yards picking from the bines as you talk to the farmer, you gain a much more meaningful connection to the ingredients you are using and what it took for them to get to you,” says Kielty. “With that comes a higher respect and understanding that is often overlooked.”