It's not just you—mosquitoes are bad this year. But gardeners and farmers can help researchers better understand mosquito movements and protect public health. 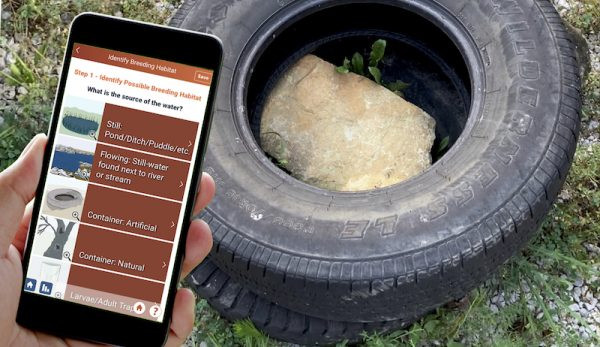 The clouds of mosquitoes on my Indiana homestead seem bigger and buzzier than usual this year. I think they’re biting a little harder, too. Turns out, that might not be my faulty memory or just my imagination at work.

“People say, ‘It seems like mosquito bites hurt more than usual, and they bite my ankles more than usual,’” says Dr. Russanne Low. Low is a senior scientist at the Institute for Global Environmental Strategies and the science lead for the GLOBE Observer Mosquito Habitat Mapper project.

She continues, “These invasive species—the Aedes albopictus and Aedes aegypti—are more painful biters. And they bite the ankles!”

What’s more, these species fly during the daytime. Thanks to climate change, mosquito season is also generally longer in many parts of the U.S.

Aedes aegypti is sometimes called the yellow fever mosquito. And Aedes albopictus is also known as the Asian tiger mosquito. Both are great at spreading disease-causing pathogens.

“They are two of the vectors that are responsible for some of the really dangerous diseases, including Dengue, Chikungunya, Mayaro, yellow fever, and of course Zika,” Low says.

“These two baddies that now are in the U.S. had not been here [before the 1970s],” she says. “The tiger mosquito … came over in lucky bamboo and also in the used tire trade from East Asia. Now, they’re thoroughly naturalized in the U.S.”

Unfortunately, both also typically breed in manmade containers. Standing water in an old flower pot, abandoned tire or even a stray bottle cap is often all that it takes.

Reducing these mosquito population sources in your own yard or around the farm helps. But there’s much more we can all do to slash their numbers and safeguard public health.

The GLOBE Observer app includes the “Mosquito Habitat Mapper” and the “Land Cover” tools, among others. (GLOBE stands for “Global Learning and Observations to Benefit the Environment.”) Anyone with a smartphone can easily contribute valuable research data using these tools.

“We have more than 126 countries that participate in GLOBE, and I think 74 countries have contributed data to the Mosquito Habitat Mapper,” Low notes.

Read more: You can control mosquitoes around the farm. Here’s how.

To use the mapper, you first need to locate a potential mosquito habitat. Found one? Open the Mosquito Habitat Mapper tool on your smartphone and select the “New Observation” option.

“It’s all automated,” Low says. “Like the latitude and longitude come up, and the date and time come up. When you see a place where there’s standing water where there might be mosquitoes, you document it and you take a couple of photos.”

To document your find, you’ll choose a habitat type from a series of possible selections. You can also opt to identify any mosquito larvae you see. “You can put them in a little bag, take them back home, and look at them using a little clip-on microscope or a magnifying glass, [take photos,] and then send those pictures up,” she continues.

Finally, if you are able, dump out standing water that mosquitoes breed in.

Now in its fourth year, the Mosquito Habitat Mapper includes about 30,000 measurements from around the world. “We’ve looked at the data from the first three years. We were looking at the differences between different parts of the world and how people are responding.

“I think the most significant thing from a health perspective is that we were really surprised to find out that in places like South America, almost 90 percent of the people that are using the app are also saying, ‘Yes, we tipped out the water. We mitigated that site.’”

From now through August 25th, would-be citizen scientists can also contribute data for a special Mosquito Habitat Photo Challenge. “We have a request from some scientists who are doing research in developing automatic classification using artificial intelligence machine learning,” Low says.

In particular, they need lots of photos of land cover, mosquito habitat and mosquito larvae. She continues, “We said, ‘We can help, because we’ve got all these citizen scientists from around the world who want to contribute to this sort of cutting-edge science.’”

Photo challenge participants first follow the Mosquito Habitat Mapper steps. After uploading your findings, you then have the opportunity to take a land cover measurement.

“The date and time and the latitude/longitude, once again, automatically come up,” Low explains. “Then, you’re asked to take six pictures—up, down, north, south, east and west.”

Don’t know which way’s which? The app’s directional icons will guide you accordingly. After lining up each icon with its corresponding direction, you’ll snap a photo and upload the results.