Kale's dark-green leaves are nutrition-dense and easy-to-grow, even out here in Italy. 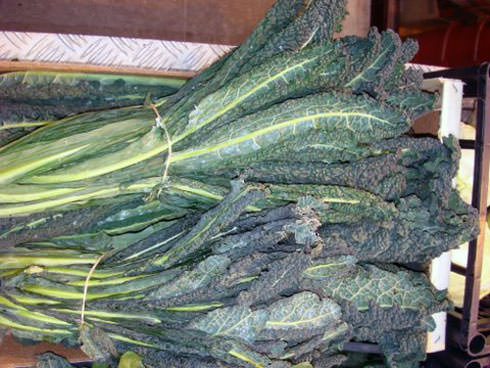 One of the stylish vegetables coming from Italy and making its way onto more American plates is black kale, or cavolo nero as itâ€™s called here in Northern Italy. It is an unusual crop because, first, its incredibly dark-green leaves are packed with nutrients, and second, it is quite pretty. Sometimes itâ€™s referred to as Tuscan Palm because the angle of the leaves is such that once the lower leaves have been harvested it can look like a little 2- or 3-foot-tall palm tree. The leaves are deeply indented and look sort of like what we imagine dragon skin might look, so it is also sometimes called dragon kale. Botanically, it is a member of the kale branch of the cabbage family, or Brassica oleracea variety acephala. Black kale is also included on many edible landscape lists.

This plant, like the other cabbages and kales, grows best during cooler months. In warmer winters, like those in Italy, kale is grown over the winter and leaves are harvested over many months. In some places it is also grown as a very early spring crop. Unfortunately, the leaves that develop in hotter weather are tougher and bitterer. Common legend is that the sweetest leaves are those that are hit with a light frost just as they reach full size.

Fortunately, this is probably the easiest of all the cabbage-family vegetables to grow because it is the most frost-hardy, and it also seems to have a greater resistance to the classic pests and diseases that attack this particular family. I have found that â€” big surprise â€” the richer the soil, the bigger the plants will grow and the more tender the leaves will be. I think this is because a leaf that has grown quickly will obviously be tenderer. Therefore, lots of water and plenty of fertilizer are called for with black kale.

I generally plant black kale in late summer, and may get the first leaves ready to harvest around the beginning of November. I spray the plants in fall with Bt to combat cabbage worms, but I think both the butterflies and the worms prefer the broccoli plants growing nearby at that point in time. I have a friend in England who grows his kale in short garbage cans, in the same way that potatoes are often grown; with sterile, bagged soil in containers, all as a strategy to avoid persistent fungus problems such as club root.

We start harvesting whenever the leaves look big enough, and then keep pulling off a handful of leaves a bit at a time over the course of the winter. This winter had a big sub-zero period, so the kale froze, but most years we can harvest from a plant up to a dozen times over a period of four or five months.

Like most greens, black kale can be boiled, sautĂ©ed and mixed in vegetable dishes. It is particularly good in soups and cooked bean dishes. Not only does this plant taste great, but the benefits of kale are incredible. Kale is rich in beta-carotene, zeaxanthin and other vitamins.