I finally got around to reworking the irrigation pipes in the lower part of the garden this weekend, and I now have two new spigots down there. 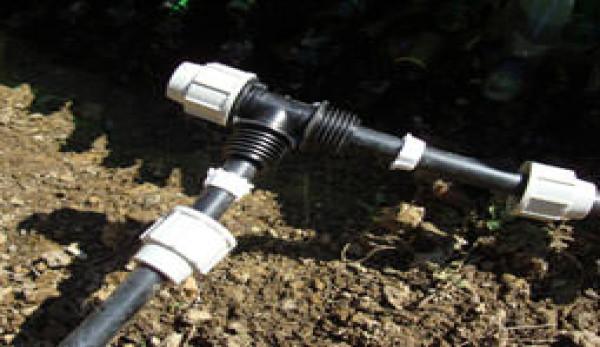 Iô finally got around to reworking the irrigation pipes in the lower part of the garden this weekend, and I now have two new spigots down there.ô  Iãm building a new terrace and took the opportunity to run the water pipes under and through the new walls as I was building them.

When I lived in the states I did a whole lot of garden-water pipe installations, and I always used the straight, white plastic PVC pipes and the fittings that needed to be glued together.ô

Here in Italy, nobody sells that system and they use instead the rolls of black plastic pipe that is greasier and cannot be glued. The fittings are all screw-down pressure fittings.ô  At first I was dismayed, but after a few jobs Iãve become a big fan of the black pipe systems.ô  No more worrying about glue, and the system has the added benefit that the connections can be taken apart and re-positioned whenever appropriate.ô

The fittings are much more expensive though, and while a PVC elbow might cost 50 cents or less, a pressure elbow costs about three euros.

My project this weekend involved the installation of two new hose bibs and the complete installation took only about fifteen minutes.ô  Most usually I need to double check the system and re-connect a fitting or two that is leaking, but this time everything worked perfectly on the first try.ô  Most excellent!

The hose bibs are a bit different here too, as are the hoses.ô  Italian hoses donãt generally come with the threaded fittings already affixed to the ends.ô  The nurseries sell hose tubing at about two euros a meter, and then the hose tube can be fitted with ends.ô

I use yellow hoses in the garden, but some of the big nurseries sell green, blue, red and even pink hoses.ô  Most garden faucets come with a fitting that screws onto the spigot threads and offers a male fitting over which a hose end can be pressed and then secured with a hose clamp.ô

Many gardeners use instead the orange plastic Gardena-type pressure fittings that allow a hose to be ãclippedã to a hose bib.ô  The plumbing stores also sell some cool brass versions of the same style.ô  The hose bib has to have a special fitting that fits inside the hose coupler end, but in the end, this clipping and unclipping hose connection system is way more convenient than the types of hoses I used in the states where I always had to screw and unscrew hoses to move them.ô  I know they do sell Gardena hose couplers in the states, but I was always somehow not motivated to use them.ô

It always feels good to me when I install new spigots in the garden.ô  Having water where it is most convenient is a key part of building a garden I think.ô  I have eight hose bibs in the garden now and the most recent I was clever enough to position very conveniently on a wall by breaking one of the bottles that are used instead of bricks to build the walls and then running the pipe through the wall.ô  Ahh!ô ô