Black radish is a food, like other radishes, but it also has numerous healing properties used for centuries that researchers are now verifying. 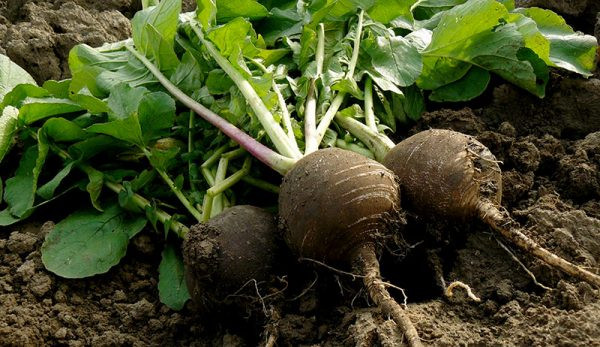 I like conferences. Not only do I get to share the information Iâ€™ve gathered, but my audience members frequently also share their research and experiences with me. I recently spoke at a conference in Pennsylvania. While I signed books, a woman shared a plant with me I’d never considered putting in my medicine cabinet: the black radish. I was, of course, intrigued and promised to go home and research it for myself.

The woman took great care to specify that the black radish, Raphanus sativus L. var. niger worth my research and effort is the black Spanish long radish.

At the conference I found a seed pack of black radish at the Southern Exposure Seed Exchange booth. I carefully considered bringing home a pack. Southern Exposure is among my favorite seed suppliers, and what better way to explore a new vegetable? Unfortunately, as the â€ślong radishâ€ť part of the story had been so stressed, I wasnâ€™t sure the globe form of the plant would fit my inquiry. I’ve since learned that a few different forms of the black radish exist, and they are interchangeable.

Black Radish as a Food

Black radish, like other radishes, is a delicious and nutritious food, and that is worth discussing before getting to its history as a medicine. The plant is packed with vitamins C and B, potassium, magnesium, copper and manganese. It is believed to have originated in Asia and spread from there. Black radish is typically cooked by removing the peel then cooking the white inside. It can also be used raw, grated and added to salads. I havenâ€™t tasted this type of radish yet, but it appears that with the peel on it is more bitter than its red, white or pink cousins.

I have written before about radishes. It surprised me to find that they have so many uses beyond salads. So hearing that black radish is a sort of â€śheal-allâ€ť didnâ€™t surprise me.

Black radish has been a popular gallbladder tonic throughout China and Europe for hundreds of years. It is great for folks who struggle with bile function or digestive problems, such as issues with fat and protein digestion. In India it is called black mooli and is a well-known liver tonic. Traditional medicine in Mexico suggests the use of this radish as a liver cleanse and digestive support. In many parts of the world it is used as a cold and flu remedy, perhaps because of its vitamin C content.

Its reputation includes the ability to resolve digestive issues and to clear phlegm. Traditional Chinese Medicine applies black radish to clear stuck qi, particularly in liver and gallbladder, and to clear excess heat. The radish is very rich in glucosinolates. This is similar to mustard and horseradish, giving all three of these vegetables an ability to assist the body in shedding toxins and increasing metabolism.

While the black radish might be delicious baked, for health benefits it is typically juiced or made into a supplement such as a tincture, syrup or pill.

Science has recently begun to verify the traditional use of this radish. In 2012 an article in the Journal of Biomedicine found that the juice lowered cholesterol and removed cholesterol-based gallstones. This is particularly interesting as regular radishes are often used with caution for those with gallstones. Iâ€™m not sure whether this is just an improper understanding of those plants, but in the case of this radish it appears that instead of simply shifting the stones, it can dissolve them. In this particular study, there was also an increase in HDL, sometimes called “good cholesterol.”

The Journal of Agriculture and Food Chemistry confirmed the folkloric use of black radish as a detoxifier, finding evidence of its aid with liver cancer.

I love to use my food as my medicine. I love it when I can grow it easily in my back yard. And I love it when such medicine is validated with good research. In the case of black radish, I wish I had bought that packet of seeds. I guess now Iâ€™ll add it to my seed order in January.