How do you like the sound of free, self-harvesting chicken feed? That's exactly what you get when you decide to raise black soldier flies. 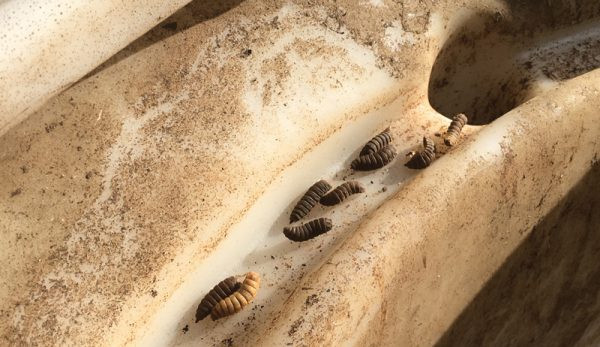 It would make me so happy to set up a system for raising black soldier fly larvae (BSFL) to feed our hens, but my wife has vetoed anything with the word ‚Äúfly‚Äù in it.

Calling them by their Latin name, Hermetia illucens, didn‚Äôt help one bit. So this will be the first column about something I haven‚Äôt actually done, but I called on a couple of BSFL experts to help me out.

Not All Flies Are Houseflies

Black soldier flies don‚Äôt look like houseflies. BSF are technically a ‚Äúfly‚Äù because they only have two wings. They actually look like very small wasps. (Wasps have four wings‚Äîsorry, entomology nerd here).

OK, ‚Äúlook like wasps‚Äù probably doesn‚Äôt help my case much either. They do look like the kind of insect that is technically a wasp, but it‚Äôs not the kind of wasp that stings people. They look like a nonstinging wasp. Is that better?

OK. Never mind all that. Take a look at these important differences:

Here are some bugs you chickens love‚Äîand some they hate!

Yes, black soldier flies harvest themselves. You don‚Äôt even have to touch them.

The wiggling larvae graduate into crawling prepupae (I warned you‚Äîentomology nerd) and feel a compulsion to climb The Ramp of Death in a Biopod, Protapod or a DIY digester.

At the top of that ramp they find The Hole of No Return and unwittingly drop through it into The Bucket o‚Äô Free Chicken Feed that you provide. (These are not official names of the components.)

Then, every couple days, you dump the bucket where your chickens can enjoy some high-protein snacks. How easy‚Äî and not-gross‚Äîis that?

Karl Warkomski of Tar River Trading Co. sells the Biopods and Protapods that make it easy to raise BSFL as well as starter larvae. He raises them to feed his own chickens.

Warkomski says the larvae have a signature odor, like bees or crickets, that‚Äôs not foul. “It‚Äôs like a musk,‚Äù he says. ‚ÄúIt‚Äôs exciting to smell when you first set up.‚Äù He also says that raising them is extremely rewarding: ‚Äú[It‚Äôs] like beekeeping, except you don‚Äôt get stung.‚Äù

Bioconversion by BSFL is faster than composting. The larvae convert kitchen waste in 24 hours. They don‚Äôt eat things such as paper and most garden scraps, but those materials will compost in the system at their own pace.

Shawn Jadrnicek dedicates a chapter in The Bio-Integrated Farm to his experiences and research on BSFL. He writes that BSFL tolerate wider temperatures and moisture levels than red worms. Plus, they consume food waste faster than red worms.

Depending on temperatures and actual feedstock, the BSFL attain 50 to 95 percent reduction of the volume of food waste. What‚Äôs left at the end of autumn can be incorporated into the garden just like regular compost or added to a red worm bin for further digestion.

Warkomski‚Äôs home goal is to offset about a third of the cost of chicken feed with BSFL grown on kitchen waste. With a few years experience under his belt, he‚Äôs easily past that level.

How to Get Started

BSFL are native to the wetter states as warm or warmer than zone 7, meaning the southeast and warmer parts of the Pacific Northwest.

In those states, they will show up on their own. But in drier and cooler parts of the country, you can introduce them each year.

According to Warkomski, if you have to buy, get larvae rather than eggs. They are more resilient. And buy from the U.S. for better survivability.

You‚Äôll need a container, called a digester, in which to raise the larvae. You can buy one ready-made from vendors such as Warkomski, or build your own. A DIY digester will need to meet several criteria:

Rarely, anaerobic clumps of food waste will form in the digester. They just need to be fluffed up with a hand rake.

Shawn recommends adding 2 to 3 pounds of food waste per square foot of digester per day. This optimizes the reproduction of larvae while minimizing the likelihood for odors from a buildup of rotting bacteria.

Warkomski‚Äôs Biopod and Protapod both drain liquids into a reservoir with a tap. Otherwise, you need some drainage holes to keep liquids from building up and getting stinky.

Check out these 5 sources of alternative protein for chicken flocks.

Adult black soldier flies start looking for mates and lay about 500 eggs by mid-spring in the rainy parts of zones 7 to 11 in the southeast and Pacific Northwest. If you live outside that area, you will have to buy larvae (aka ‚Äúneonates‚Äù) online.

Once the temps are in the upper 70s and humidity is higher than 60 percent, they start laying eggs. That‚Äôs the time to start loading kitchen scraps into your BSFL container.

For the first two weeks you‚Äôll have fruit flies and houseflies, but then BSFL will take over where they are native or have been added and will spread from there to the poop in your pen. Their musk will push houseflies away.

Shawn suggests speeding up the process in subsequent years by keeping some frozen liquid from the digester over the winter. Come spring, thaw this out and spray it on a stack of cardboard about the size of a deck of playing cards.

Position the scented cardboard in the digester with some food scraps as an attractant.

A few weeks after the arrival of adults, larvae will start the climb up The Ramp of Death. The larvae that drop into The Bucket o‚Äô Free Chicken Feed will cocoon within a week and become flying adults that can escape your clutches.

So harvest them every two to five days (unless you can position your pod to drop larvae directly into the hen pen). It won‚Äôt hurt to drop a few larvae into woodpiles and leaf piles during the growing season to boost the adult population.

For Warkomski, in Piedmont, North Carolina, around Thanksgiving, the last of the adults have died and no more larvae is left to harvest. He dumps whatever organic matter is left in his Protapod into the garden.

He then stows the pod away upside down until the spring when the BSF return naturally. Some of them will have overwintered as pupa in organic debris, such as leaf piles and wood-chip piles.

Jadrnicek advises setting aside some BSFL for winter-feeding. Put a container of larvae in the freezer to kill them. You can hold them there until you‚Äôre ready to slip them under your chickens‚Äô Christmas tree.

Or run them through a dehydrator. That way you can store them in a jar in a cabinet instead of taking up high-value real estate in the freezer.

One other thing you can do over the winter: Think of a new name for these creatures that doesn‚Äôt include the word ‚Äúfly.