Also known as Norfolk Black and Black Spanish, the striking Black turkey is raised primarly for its meat. 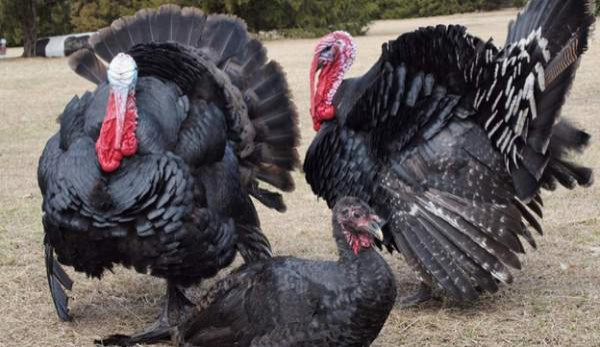 Use: Like most other varieties Black turkeys are primarily used for meat production. Their metallic black feathers are also admired by breeders and fanciers.

History: Black turkeys were developed in Europe from Black turkeys brought back from Mexico by European explorers in the 1500â€™s. They were selected for meat production for two centuries there until they returned to North America with early settlers. The Black was also used in the development of the Bronze, Narragansett and Slate. They were commercially viable in the early 1900â€™s but never as popular as the Bronze, Bourbon Reds and White Hollands. They were admitted to the first American Standard of Perfection in 1874.

Special Considerations/Notes: Commonly known as the Black turkey, they are also referred to as â€śNorfolk Blackâ€ť and â€śBlack Spanishâ€ť in the United States. Some strains of Black turkeys have tended to become smaller than standard weights because of lack of selection for size.