To keep your sheep in the best health possible, body condition scoring is a tool you can use to identify any problems. 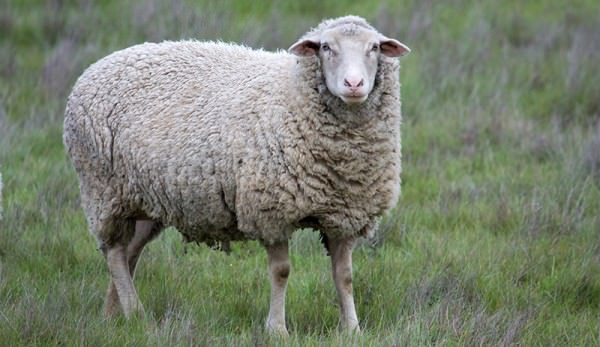 Itâ€™s not enough to look at your flock one day and say, â€śMan, my sheep are thin!â€ť Responsible management means assessing your animalsâ€™ condition on a regular basis, before they get to the â€śthinâ€ť stage, to keep them in productive health. This is where the body condition scoring systemâ€”evaluating fat cover at eight areas of an animalâ€™s bodyâ€”comes in.

Breeding, early gestation, late gestation and lactation are the management periods Ely refers to. Add in growth and maintenance, and youâ€™ve pretty much summed up a livestock animalâ€™s life.

â€śYears ago, we didnâ€™t do body condition scoring,â€ť Ely says. â€śWe didnâ€™t have a system. Management of our ewes on an annual basis has improved because of the BCS system.â€ť

BCS isnâ€™t just for production-stage animals. In terms of time and money, itâ€™s just as important for growing animals, as well as those simply in maintenance mode, because animals will be healthiest and most economical to manage when their scores are at a moderate and appropriate level.

While each species carries its own BCS numerical range and standards, the eight points of the body that are evaluated in each species are the same: brisket/sternum, shoulder, ribs, loin/lumbar vertebra (the spinous processes and transverse processes), hooks, stifle, tail head and pins. Animals are evaluated while standing and walking and from the front, side and rear.

â€śSome species can be visually scored, like beef or dairy cattle; other species will need to be felt around the spine,â€ť says Nancy Glazier, the Cornell Cooperative Extension small farms specialist. The ribs and tail head will also need to be felt to assess fat cover. Palpation is particularly important to assessing accurate BCS for animals with heavy hair or wool cover and when itâ€™s not visually apparent whether the animal is carrying muscle or fat.

You can read about BCS all you want, but every farmer really needs to get some in-person experience to be able to accurately carry out a BCS assessment.

â€śThere is no substitute for getting your hands on the sheep and handling them under the direction of a supervisor,â€ť Ely notes. â€śIf you have wool sheep, you need to know how to get below the wool to handle the sheep. â€¦ Once you do 1,000, you can probably eyeball the sheep and determine what condition score theyâ€™re in,â€ť he says, but until then, itâ€™s all hands-on.

Local and state extension offices, agricultural organizations and breed groups offer BCS training sessions. Get on board with these during conferences, field days and university events for a positive first experience in BCS evaluation. Youâ€™ll meet other producers there who can help you with your own animals, too.

BCS tells you about the condition of every animal on your farm as an individual, as well as paints a picture of your overall management of the farm. If one animalâ€™s BCS is higher or lower than normal, you should pay attention to that animalâ€™s needs specifically.

â€śSome individual animals may not perform as well on the same feed and may need a little more TLC in the way of feedâ€”better quality hay or more grain, for example,â€ť Glazier says.

If a whole herd or flock is showing abnormalities, look at the larger picture. Feed and forage quality, parasite issues, stress and illnesses are all issues that can be noticed before a crisis arises when you pay attention to BCS.

Just as knowing BCS is important, so is knowing your animals independently of their species average.

â€śBreeds of livestock species vary, so this needs to be kept in mind when scoring,â€ť Glazier says. â€śA smaller-framed animal may have better condition but just look smaller.â€ť

Keep in mind that BCS is not a measure of weight but rather of fat and muscle.

Body Condition Scoring Through the Stages

The ideal BCS numbers will vary by species, but what youâ€™re looking for is essentially the same in each management stage.

You want your animals to be healthy but not carrying extra fat right now.

â€śSometimes, we feel sorry for the ewes and think theyâ€™re not in good enough condition, so we feed them until they become obese, and they quit producing for us,â€ť Ely says.

With sheep and goats, your goal might be nutritional flushingâ€”feeding the ewe or doe more and increasing her BCS just before breeding so she will ovulate more and give you a better chance at having multiple lambs or kids. This works best if you start with a female that has a lower BCS.

You shouldnâ€™t see much change in your animalsâ€™ body condition in the first part of gestation. The BCS should be the same as it is during the maintenance phase of its life. According to the Purdue University Cooperative Extensionâ€™s â€śBody Condition Scoring in Farm Animals,â€ť by Michael Neary and Ann Yager, ruminants in this stage that have a high BCS could be fed lower-quality forages. You donâ€™t want animals gaining too much weight right now. On the other hand, animals with a low BCS need to be offered more and better-quality feeds to prepare them for the next stage.

With increasing energy needs for them and their developing fetuses, youâ€™ll probably have to up your animalsâ€™ rations to keep a good body condition. Purdue University Extension states that, going into birthing, animals with moderate BCS usually have fewer birthing problems, fewer neonatal losses, higher quality colostrum, increased milk production, shorter time to breed back after giving birth and increased conception rates.

Most animals cannot consume enough calories to meet the energy demands of lactation, so their BCS will decrease, even as you increase their rations. As lactation drops off and your animals enter the maintenance or breeding phases again, be sure to decrease their rations as they reach appropriate scores.

Get to know your animals in each stage of their lives, get to know the appropriate conditioning for your species and learn to rely on body condition scoring as an indicator of your livestock management. Having a reliable system such as this can take much of the guesswork out of healthy animal-keeping.