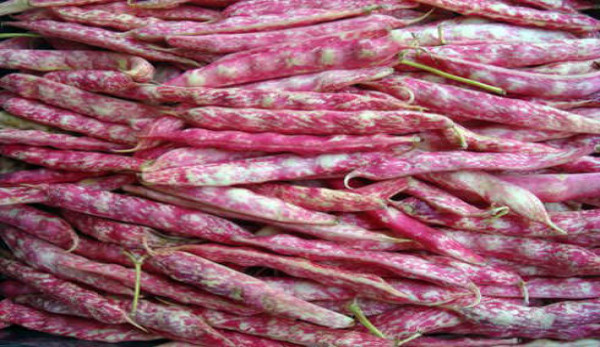 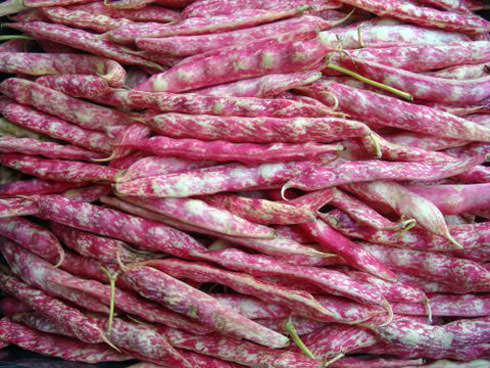 Borlotti beans are the staple in the famous Italian dish, pasta e fagioli.

As a result of poor planning and preparation this year, our crop of borlotti beans is nonexistent. The problem is I had enriched the planting area with too much nitrogen; too much nitrogen will make bean plants grow a lot of leaves but not many flowers.

As soil prep for my most lush tomato, pepper, squash, corn and cucumber planting beds, I often dig a hole 2 feet deep, throw in five or six double handfuls of some fertilizer material, and then refill the hole. Then later, I plant crops into the soil above, and the roots find their way down to the hidden cache, which is when explosive production occurs. This strategy worked so well with the eggplants this year that Iâ€™ll swear each individual plant has been producing two or three harvestable fruits every week for the past two months. Unfortunately, the reverse is true for my borlotti bean crop. I had intended to plant pumpkins in that bed, but then I built another bed for the pumpkins and ended up planting the borlotti beans in the highly prepared bed.

Borlotti beans have red shells and red and cream spotted beans inside. Some unusually red pinto beans can look similar, but borlottis are usually plumper and always sweeter. Also known by many other names, including cranberry beans and French horticultural beans, they grow like all other members of the highly variable Phaseolus vulgaris species, including bush and vining types.

Barlotti beans like warm soil and regular watering. Planting beans in the garden too early in cool soil can stunt a crop. Big commercial growers worry about some pests, but small growers generally donâ€™t have too many pest problems. Old bean vines do exhibit many rusts and mildews but those usually arrive after the plants have produced the beans.

Usually, we eat the borlotti beans that we grow as fresh beans. The freshly shelled beans can be boiled for a few minutes with a few spics to make a very tasty dish. We also use fresh beans in soups if the beans are harvested in cold weather. The dried borlotti are also a favorite for soups and dishes, such as the famous pasta e fagioli. We rarely produce enough dry our borlotti beans, so we buy dried borlotti in the winter. The whole country of Italy has this problem, and while locally grown, fresh borlotti, in their bright red shells, are for sale in every market in the north, the dried borlotti that Italians use for minestrone during the winter are often imported from Brazil or some other country.

The bottom line is Iâ€™ll have to be more careful with my borlotti bean crop next year. Iâ€™ll still dig a hole or deep trench and fill it with fertilizer materials but, for beans, Iâ€™ll use a mixture of bones and fireplace ashes, which will supply a lot of phosphorus and potassium, but no nitrogen. Iâ€™ll let the degrading compost and the nitrogen-fixing bacteria provide the nitrogen, and that should work out better.