Boston Microgreens founder and co-owner Oliver Homberg tells us how experimenting with microgreens at home led to a business supplying local chefs. 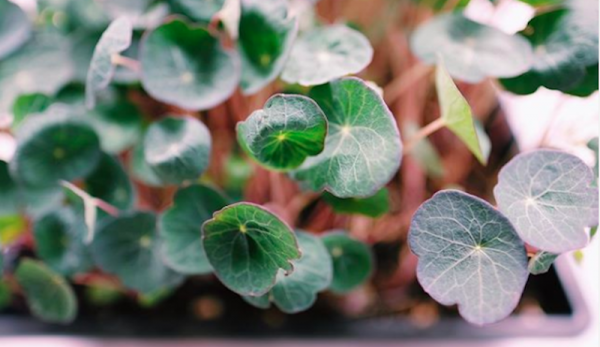 Microgreens are a great gateway to growing your own produce at home, especially if you don’t have an abundance of space, time and money. These dinky vegetable greens pack a range of nutrients and can be started in even the tiniest dwelling.

Case in point: Boston Microgreens scaled up from experimenting with growing greens in an apartment to becoming a go-to resource for local chefs searching for sustainable and seasonal ingredients.

We spoke to Boston Microgreens founder and co-owner Oliver Homberg about getting into the microgreens field and some of the creative ways chefs use their product. We also discussed the joys of purple shiso.

“I had a general interest in agriculture and planting,” says Homberg when asked about how his interest in microgreens was piqued.

“We had a small garden in our apartment and we stumbled upon a YouTube video that promised you could grow $100,000 worth of microgreens in your apartment in a year. It may have sounded a little presumptuous, but that’s where the idea came from.”

Learn how to add microgreens to your garden lineup.

The Roots of a Microgreens Business

After initially setting up with “a couple of racks and soil and trays and seeds,” Homberg began taking microgreens to local restaurants. The venues, in turn, spread news of the produce via word of mouth.

“Before you knew it, we had weekly orders and it started to grow into something a bit more substantial,” recalls Homberg.

When it comes to pitching microgreens to chefs, Homberg says “it’s always a challenge between growing what you’re good at and growing what the chef’s want.”

He adds that the home market usually plumps for pea shoots, sunflower, radish and brocoli microgreens. But delivering to food industry professionals “gets a little more intricate, so you’re growing fine herbs and nasturtiums and shiso.”

Meet the microgreens advocates growing in a 20-foot trailer.

Shiso undercanopy ~ a second round of germination brought on when the heat from our grow lights manages to sprout the seeds that didnâ€™t make it the first time! Attention all growers: while it may seem tempting to just throw this back on the rack BEWARE… the longer you keep a tray (especially one with dead plant material) the more prone you will be to pathogens that feed on these conditions. Compost that soil and start over!! Happy Sunday farming Boston ?

Many microgreens pack a punchy taste and pleasing crunch, especially those that veer toward the peppery side of the spectrum. Homberg says the purple shiso is the most distinctive variety his company grows.

“It’s a Japanese herb in the mint family, and it has a very complex flavor profile,” he explains. “It has anise, and it has cumin. It has floral, berry and a bit of mint and basil. So it’s all over the map.”

How to Use Microgreens

“People use microgreens a lot as garnishes,” explains Homberg. “But people also use them as ingredients and really include them as an element of the dish.” He adds that he especially enjoys seeing chefs “mixing different microgreens together and really combining the flavors and the aromas and the appearances to create something special.”

How to Grow Your Own Microgreens

Now if that isnâ€™t a healthy tray of borage I donâ€™t know what is. This bad boy will last up to two weeks in the walk in and is bursting with flavor and juices. Our premium soil mix allows us to deliver a product that is not only live but rich with its own natural essences. Something about the microbiology in the soil really makes a difference. Even for microgreens!

He also adds you’ll want to “keep your area well ventilated and have light.” You should also make sure to “stomp [the microgreens] down and cover the seeds during germination. Just give it a try, really. That’s all you need to do!”