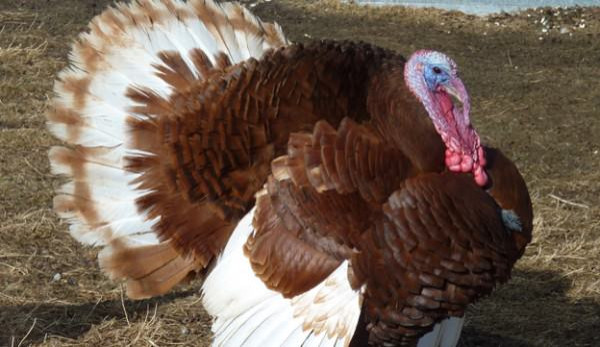 Use: Bourbon Red turkeys are used for meat production. They are popular with small farms because of their ability to forage and their light colored pinfeathers make for an attractive carcass.

History: The Bourbon Red has a well documented history of development in Bourbon County, Kentucky from crosses of Bronze, White Holland turkeys and darker reddish-colored Buff turkeys brought from Pennsylvania. They were developed with production in mind and originally competed with Bronze through the 1940â€™s. Since then until recently, they were primarily kept by hobbyists, but a new surge of interest in heritage turkeys has been a boost for Bourbon Reds in the marketplace. Bourbon Reds were admitted to the American Standard of Perfection in 1909.

Special Considerations/Notes: Bourbon Reds are the most popular of the heritage turkey varieties with the largest census of breeding birds in the United States.