Box Turtles In Your Garden Can Teach You To Slow Down

Box turtles are fascinating omnivorous creatures. Here's how to create and enhance habitat if you find one living in your garden. 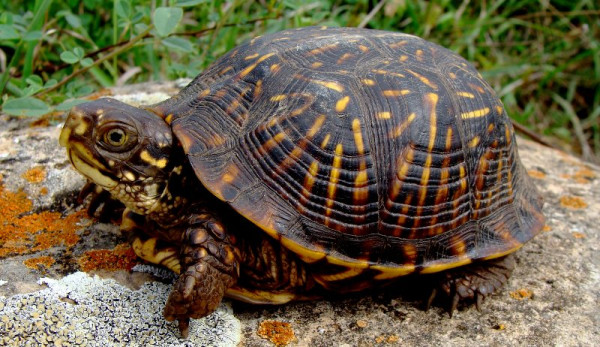 Turtles represent what most of us want to do this time of year: Slow down, move inside and take time for ourselves. If you find box turtles on your property, take the opportunity to understand a wild creature that wonâ€™t quickly flee from your attention.

Do you know the difference between a tortoise, terrapin and turtle? Turtle is an umbrella term that covers land and water dwelling reptiles with hard shells. Tortoises live mainly on the land and have clubbed feet adapted for traversing solid ground. Turtles in general move between water and land throughout their lives; terrapins are turtles that are semi-aquatic and live in brackish areas. Despite their scientific name referring to terrapins, common box turtles (Terrapene carolina) might be the most common garden turtle. They spend most of their time on or in the ground, not swimming or submerged in water. Six subspecies of box turtle are found throughout the United States and Mexico, primarily in eastern regions. Box turtles’ shell patterns are distinct for each subspecies and vary by individual turtle. Usually a dark brown or black background contrasts with bright yellow, orange or light brown shapes.

Box turtles are a uniquely adapted to protect themselves, not just with the hard upper shell called a carapace but also with a hinge on the lower shell, or plastron. When the turtle retreats within its own body, it can close the door on its carapace and shut out the rest of the world like closing up a box. Donâ€™t mistake that hard shell to mean a box turtle doesnâ€™t have feelings. Despite a tough exterior, turtles are vulnerable and sensitive creatures. The shell is like a modified spine, including the spinal cord, and is sensitive to touch. Turtles undoubtedly feel damage to the shell. Should you need to move a turtle, never pull it by the tail, which is the tip of its spinal column. That could really hurt.

Also never relocate a turtle. Turtles have home ranges and depend on knowing their whereabouts for survival. These long-lived, loyal animals stay within 250 yards of the nest where they were born. If moved more than a mile or two away, the turtle could wander aimlessly and die of starvation because it is not familiar with its surroundings. Turtles crossing the road probably have a certain destination in mind, a special spot for breeding or nesting.

Here are some tips for safely helping a turtle cross a road:

On your own property, tune into turtle habitat. Pay attention to the earth, whether itâ€™s leaf litter, bare dirt or loose sandâ€”places a box turtle could use for either starting new life or taking a seasonal break. Box turtles are omnivores and will eat a little bit of everything within reach. Slugs, grubs, worms and various insects provide protein, and berries, grasses, leaves and sprouts round out their plant needs. Thick leaf litter is wonderful habitat for box turtles. They can find insects and keep cool under the shade while burrowing tunnels to sleep in. They also use muddy, boggy spots to cool off.

If they canâ€™t keep cool by finding what they need in their environment, they can use their own internal resources. They pee on themselves. Parts of their body that they canâ€™t pee on, they can smear saliva on, such as their head and neck. As the moisture evaporates, their body temperature lowers.

Box turtles make the most of their small range and donâ€™t waste any energy or resources. While they are social animals with other turtles, they donâ€™t have to mate every year. Females can continue to lay fertilized eggs for as long as four years after mating. Turtles carefully select their nests, scoping out warm spots by looking closely and rubbing their noses around in the dirt. Even after digging a nest, they might decide itâ€™s not suitable and continue the search. This nest site is critical to their survival.

Should you be fortunate enough to witness a turtle nesting in your garden, identify and protect the site with some type of flagging or barrier that does not obstruct the sunâ€™s rays from warming the earthen incubator. If you see turtle activity in your garden, keep dogs away from the habitat. Let your neighbors know as well. If you can identify the species of wild turtle that has graced your garden, report it to your local fish and wildlife office.

The common box turtle is not so common nowadays. Even these masters of retreat, temperature regulation and patient waiting for dangers to pass are not faring well in a quickly changing climate. Being stolen from the wild to be kept as a pet or sold in a pet store is another major impact that they canâ€™t recover from quickly. Fresh water, and safe corridors for wild turtles to travel to fresh water, are increasingly scarce. Loose, noncompacted earth is a rarity in itself. Box turtles are listed as vulnerable, one step away from endangered, on the IUCN Red List because of these hazards and more.

What can we learn from autumn-colored box turtles in our gardens this cool season? Patience, practicality, and attention to our surroundings; cooling off and calming down; making the most of fallen leaves; appreciation for simple solutions and low-hanging fruit; and returning home for nesting and self-care.