Roosters crow, and not just at dawn. Here are the reasons a rooster will crow all day, every day—and what different vocalizations can mean. 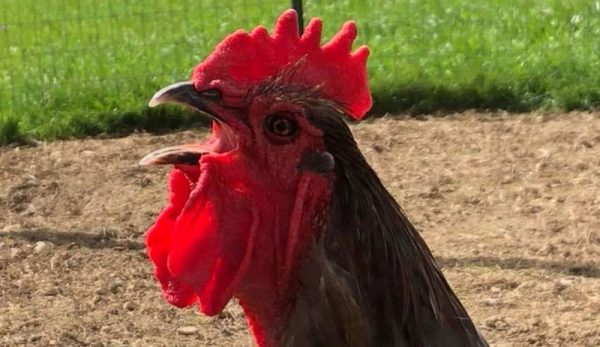 One of the most idyllic images of country life features rolling fields of wheat and corn and a picturesque red barn. Cows contentedly chew cud, while a colorful rooster, perched on a fencepost, releases a crow to greet the rising sun. Many people wishing to leave the urban and suburban rat race envision this type of pastoral environment when they make plans to move to the country.

And then they arrive and the reality of rural life shatters that pretty dream.

Okay, so it’s not really so horrible out here in ag land. When my husband Jae and I decided to leave the city for rural life, we knew what we were getting into: Hard well water. Combines, tractors, and other large farm equipment on the road. Lots and lots of insects.

For us, the trade-offs—peace and quiet, plenty of property, no nearby neighbors, no HOA—far outweighed the negatives. We came in with our eyes and ears open.

Not everyone does, however. “Does your rooster crow all day long?” is the question I was asked by our former neighbors to the north, the Smiths. A retired couple, the Smiths had moved from urban Florida to the lot adjacent to ours.

We still have no idea why they left their sunny southern city to live in the Michigan boonies. I’m guessing that the “idyllic country life” thing had something to do with it.

They built a beautiful home and carefully landscaped around it. Then they moved in, ready to relax and enjoy their golden years near some of the state’s largest forests and wilderness areas.

Jae and I welcomed them to our neck of the woods (literally), then watched as they battled to maintain a manicured lawn and otherwise tried to establish suburbia on their seven acres. The Smiths’ efforts were a common topic of discussion. But we chose to remain silent and keep our commentary to ourselves.

Something to Crow About

Our roosters, however, did not. Jae and I consider cock-a-doodle-doo to be the unofficial song of the rural zone. It’s background music. We barely pay attention to it.

The crowing most certainly bothered the Smiths, however. My guess is that they truly believed a rooster will only crow to greet the rising sun. They seemed quite perplexed as to why crowing came from our property well past sunrise.

Mr. Smith stopped me one day while I was gardening to ask his question. I politely informed him that yes, our roosters—at that point in time, more than a dozen of them—crowed all day long. It was a common country myth, I explained, that a rooster will only crow at dawn.

Mr. Smith’s eyebrows shot up into his hairline at my reply. “Oh,” he said, then he turned and walked back to his property, undoubtedly to inform Mrs. Smith that our pesky roosters—more than one!—would be disrupting their peace round the clock.

For those who have not read my previous columns about the Smiths, they filed a complaint with our township about our roosters. Never mind that they knew very well that they had moved in next to a breeding poultry farm (there’s a sign by the road, for pity’s sake!).

The township informed us we had one week to get rid of our roosters. We in turn had the State Department of Agriculture back up our Right to Farm. The roosters stayed. The Smiths moved away. Cock a doodle do to them.

But back to roosters. Yes, they do indeed crow. In fact, not only will a rooster crow all day long, but he has distinct crows for different purposes.

Here’s a quick summary of how roosters talk, in case you were wondering why your own boy (or your neighbor’s) sings his song all day long.

Read more: You need to learn your state’s right-to-farm law. Here’s how.

A rooster’s morning crows tend to start an hour prior to dawn and continue until the sun has fully risen above the horizon. As sunrise changes times throughout the seasons due to the earth’s proximity to the sun, so do the hours at which a rooster crows.

Research has shown that morning crows are induced not only by external stimuli—the sun’s rays coming up past the horizon—but also by the bird’s own internal circadian clock.

In other words, the rooster has evolved to instinctively crow as the sun rises. Why they do so is uncertain. Perhaps they feel they must alert everyone within hearing range that daybreak is about to occur.

Whatever the reason, it’s instinctual and not a learned response.

This Land Is My Land

Just as chickens have a complex social hierarchy, they also stake out territorial claims. Any newcomer to their coop, to their pen, to their yard better be aware that they are entering that rooster’s territory.

A rooster will therefore belt out a territorial crow should he see any kind of movement anywhere he considers his property.

If anyone in your vicinity owns a rooster, be prepared for an exchange of territorial claims to fill the air every day, all day.

Read more: But what if your rooster doesn’t crow? Here are 4 possible reasons for a quiet cockerel.

A rooster not only defends his land. He also cares for his hens. Part of that responsibility includes informing the girls whenever he comes across a tasty tidbit to eat.

This could be a fresh bunch of dandelion greens, some juicy grubs or even kitchen scraps tossed out to the flock as a treat.

A rooster’s chow-time crow is not as shrill as a territorial crow nor as long as a morning crow. But it definitely communicates its message clearly to the hens, who come running at the sound of their rooster’s call.

When you have more than one rooster, either in the same flock or in different, separated flocks, the boys get to talking. I’ve lost count of how often I’ve worked in the runs and heard the roosters hold some sort of conversation with each other.

Again, the vocalizations differ completely from the morning, territorial and chow-time crows. In this case, it seems as though the roosters are actually conversing and exchanging information with each other.

Whether this may be “I’ll stand watch over this human while you keep the girls on the other side of the run” or “Hey, you guys in the other runs, be ready because the human is messing around in the coop and she’ll be heading your way next” I’ll never know.

I have heard our roosters strike up a conversation without me in their midst. For all I know, they might be discussing the hens, talking about the weather, or complaining about how stupid the ducks are.

There’s no mistaking the high-pitched shriek a rooster lets out when he perceives a threat to his flock. Even my kids have learned to tell that crow apart from our roosters’ other calls.

We usually end up running to the windows to check whether we need to grab a shotgun, baseball bat or other form of flock defense.

Fortunately, our roosters usually have everything under control. The girls have taken cover and the boys are puffed up, hopping up and down and from side to side, shrieking at whatever might be putting the flock at risk.

Often, it’s the carrion-eating turkey vultures which circle overhead throughout the spring and summer. Currently, it’s the sandhill cranes that pause in our yard as they migrate south. Every now and then, it’s a green heron or Canada goose.

They’ve pretty much determined that our family of fat groundhogs and our resident doe are not a threat. The few times a hawk has landed on one of our coop roofs, the cacophony continued long after I’d run outside, arms waving, to chase the bird of prey away.

Yes, a rooster does indeed crow as the sun sets. This vocalization is not a strident call but more of a low, throaty warble. It’s almost as though roosters are sad to see the day end.

Whenever I hear that deep, melodic trill, I can rest assured that our hens understand it’s time to call it a day and head into the coop. The boys remain outside, warbling their farewell to the sun, before heading in themselves.

It’s almost plaintive and sorrowful in nature, almost as if they’ve forgotten that, in just a few hours, they’ll be loudly greeting the dawn once again.