My solution to help a broody hen find her purpose. 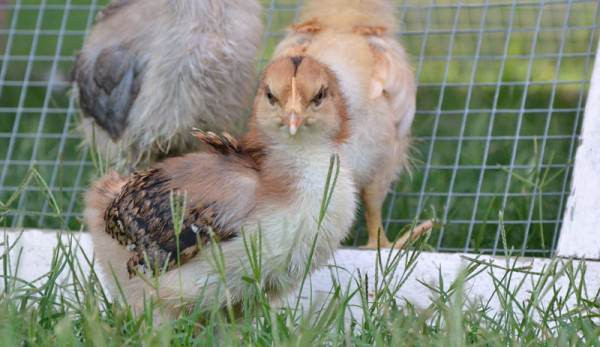 Helen, my Australorp, is the only hen of the flock thatâ€™s aspired to motherhood. Sheâ€™s always been a dedicated mother. In general, the Australorp breed does make for a good mother hen, and Helenâ€™s personal temperament is exactly what one can expect from this breed. Sheâ€™s gentle, calm, patient and purposeful in her behaviors. Twice a year, in spring and fall, Helen takes to the nest for about two weeks, plucking out her own belly feathers with or without eggs to keep warm.

This summer, Helen entered a phase of extreme brooding. Since the death of my Red Star this last winter, Mabelâ€™s former role has been up for grabs (and pecks). Meanwhile, Helen has been left in the nest.

At first, Helen defaulted as head hen in place of our fallen Red Star. When spring came and Helen became broody, our middle-of-the-flock hens started taking on roles. These are the hens with no formal roles within the flock, no behavior issues, but higher than last in the pecking order. I call them auxiliary hens.

The flock has no clear leader, and theyâ€™ve all ganged up on sweet Helen, forcing her to continue brooding.

For more than two months now, Helen has sat obediently on her nest. When I lift her out to encourage her to care for herself, the others peck and chase her once my back is turned, and it continues until she returns to the nest. Helen is thinner than she should be, yet she has continued to puff up her feathers in defense of an imaginary clutch.

Iâ€™ve been trying to break her broodiness all summer, removing the eggs promptly, bringing her out of the nest, and allowing her to free range alone with the rest of the flock confined to the run. Iâ€™ve done everything but isolate her, allowing her the freedom to follow her instincts.

TheÂ baby chicks are now 2Â˝ weeks old, so they were due for a field trip to the backyard. I lured the free-ranging girls back inside the run with a freshly burned waffle, and let the chicks out of the brooder. Within seconds of my releasing them from the brooder, the babies headed straight to the coop, climbing the hardware cloth that secures the run, and trying to find a way in. (How did they know thatâ€™s home?)

Helen left her nest and came downstairs to the run. Her eyes! She looked mesmerized, terrified and/or overjoyed!

I let Helen out of the run to look closer while my husband guarded the chicks.

Helen got close, and then ran away, cocking her head to keep an eye on the chicks. She got close again, ran away, kept an eye. This went on for a while, until I was tired of following Helen, guarding against unpredictability. I packed the babies into the brooder and brought them back into the house. The babies protested.

I donâ€™t know whether Helen thought sheâ€™d succeeded in hatching babies, or if the chicksâ€™ relentless chirping was like a bad babysitting job turned birth control.

What I do know is that after a long period of obsessive nesting, Helen isnâ€™t broody anymore. This morning as the aging girls sun their feathers in the run, Helen is at the feeder caring for herself again.