Whether you like a solid-colored Galloway or the distinctive Belted variety, you can't go wrong with this favorite small-farm cattle breed. 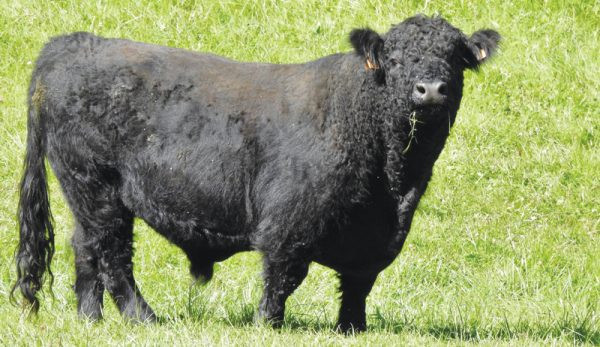 The Galloway and Belted Galloway cattle breeds are essentially the same, with physical appearance being the primary distinction between the two. Aesthetics aside, though, both breeds—with gentle dispositions and distinctive beef flavor—are excellent animals to add to small farms.

Galloways are an ideal breed for forage-based beef production. Efficient grazers and browsers, they readily consume and fully utilize brush and coarse grasses that most breeds spurn.

When Galloways shed their winter coats, their soft undercoat can be combed, blended with other fibers, and spun into yarn. And, due to their protective nature, a few Galloways in a pasture are as effective as donkeys or llamas for guarding sheep and goats from wandering dogs.

Galloway cattle originated in the Scottish Lowlands in the six shires that made up the Province of Galloway. Records indicate that most early Galloways were black. But red, browns and brindles, with or without white markings, were also fairly common.

Most were then as now naturally polled (hornless).

What all three color phases have in common are depth, thickness, length of body, and intermediate size. Cows weigh 1,000 to 1,300 pounds and bulls 1,800 to 2,000 pounds. A hallmark of the breed is its handsome winter coat consisting of a layer of soft, insulating undercoat topped by a covering of coarse, wavy outer hair perfect for shedding wind and rain.

Galloways are friendly, docile cattle. Even bulls are noted for their calm demeanor. Cows are milky, maternal and long-lived, with a well-deserved reputation for getting in calf every year.

And, though Galloways are a quintessential hardy Northern breed, they adapt well to Southern climates, too.

Galloways are listed by The Livestock Conservancy under the Watch category (“Fewer than 2,500 annual registrations in the U.S. and a global population of less than 10,000”).

The unique appearance of Belted Galloway cattle inspires many questions about their origins. They can display a black, red or dun color sandwiched about a white middle.

The Belted Galloway’s first recorded history indicates that they developed during the 16th century in the former Galloway district of Scotland. In this rugged and hilly seacoast region, hardiness was necessary for survival.

The British Isles then and now raised solid-colored, polled, shaggy-coated Galloway, generally considered to have evolved from an early Celtic breed. Precisely when and where selective breeding of the Belted variety of Galloway began is shrouded in mystery.

The Belted Galloway heifer is generally bred at age 14 to 18 months. Many breeders, however, elect to breed at 700 to 800 pounds without regard to months of age.

The mature cow at age 3 or 4 averages 1,100 to 1,300 pounds. She can be expected to annually produce a healthy calf well into her teen years.

A double coat of hair, rather than the layer of back fat most breeds require, provides winter warmth. Their heritage has conditioned them to survive in very harsh climates. Breeders, in turn, have discovered that the thrifty, medium-sized animals more than earn their way in any beef herd.

Though the breed is not well-suited to feedlots, they are ideal animals for the small family farm and the lifestyle of country living. The breed’s moderate size, docile temperament, easy calving and good mothering are characteristics they value.

Those starting new herds often pay a premium for their breeding stock.

As breeders become more serious, they begin to recognize some of the unique characteristics that make Belties suited for direct marketing of beef in organic, grass-fed or grain-fed markets. Direct marketing has the greatest potential for profit to the small farm producer.

Many raise Belted Galloways just for the pleasure of it, but the popularity of the breed has spurred many small farms to raise the breed as a serious enterprise on their family farm. Find out more at the Belted Galloway Society website.