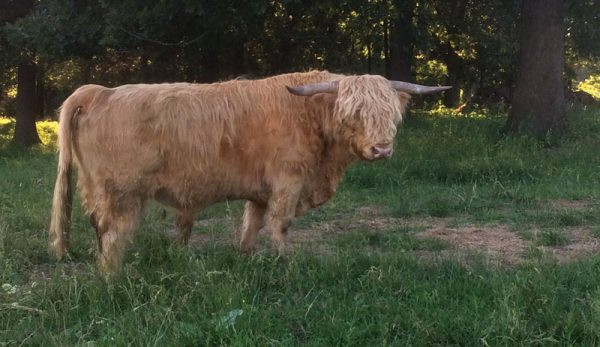 Highland cattle are an old heritage breed known to have grazed the rugged Scottish landscape since the 6th century. They played a significant part in the development and civilization of the Highlands of Scotland.

Originally, two subgroups of Highland cattle existed, which today are merged into one. Ranchers raised the smaller, mostly black or brindled cattle, known as Kyloes, on the western island. The larger red animals lived on the Scottish mainland.

Highlands, a smaller-framed breed, tend to be docile and calm. They use their horns primarily for knocking down brush to graze on, predator control and scratching.

They are also excellent browsers, able to clear a brush lot with speed and efficiency. And they will eat what other cattle pass by.Â

The History of Highland Cattle

The Highland breed contributed in a great way to the success of the American cattle industry. American cattlemen from the Western states recognized the natural qualities of this hardy breed. They imported them to improve the bloodlines of their own herds.Â

The first recorded importation into the U.S. occurred in the late 1890s. Many were brought to North Dakota in the early 1920s. Other breeds couldnâ€™t survive the cold winters.Â

Highlands can adapt to change with the area, putting on a thicker hair coat in colder climates in winter or growing a less heavy hair coat in warmer regions and shedding it in summer.Â

The breed is a low-maintenance. Nevertheless, you must treat them like a bovine. With their thick hide and hair coat, they donâ€™t need the extra grain to put on the back fat to help keep them warm in the wintertime.Â

Highlands can produce excellent beef and thrive with grass and hay, minerals and protein blocks to help balance their intake. They meat displays a vein-type marbling, and their milk is higher in butterfat, too.