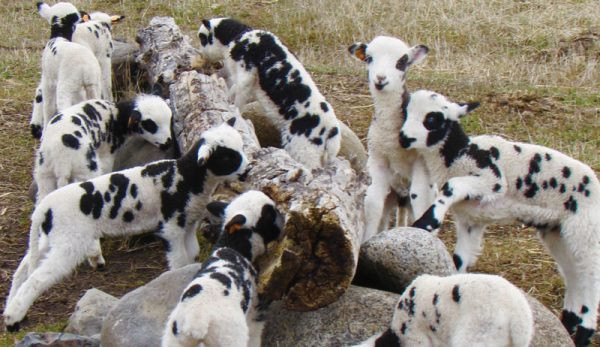 Jacob Sheep have graced the large estates and country homes of England for many centuries. Their impressive horns, black-and-white faces and spotted bodies no doubt contributed to their popularity and survival.

Their actual origins arenâ€™t known. However, documentation throughout history indicates that the spotted or pied sheep may originate in the land now known as Syria some 3,000 years ago. Pictorial evidence traces movement of these sheep through North Africa, Sicily, Spain and England.

You can find many romantic stories about the Jacob Sheep. One holds they are direct descendants of the flock acquired by Jacob during the time he worked for his father-in-law as mentioned in the Bible (Genesis 30). Another story states they washed ashore from shipwrecks during the attempted 1588 invasion of England by the Spanish Armada during the reign of Elizabeth I.

Jacobs differ from other British and Northern European polycerates (sheep with multiple horns).

Importation of Jacob Sheep to the United States and Canada has occurred in small numbers since the early 1900s. These have been dispersed all over the continent, and many were crossed to other breeds.

Some refer to these crosses as Jacobs, even though many bear no resemblance to the breed except that they exhibit spots and multiple horns.

Read more: Raising lambs comes with a lot of joysâ€”and occasional sorrows, too.

American Jacobs are old world sheep, with a primitive body shape and more slender bones. Unlike many other old world breeds, Jacobs havenâ€™t undergone improved breeding and outcrossing to satisfy the commercial marketplace.

Due to finer bone structure and less body fat, you can stock more of these sheep on pasture than the modern breeds, with 25 to 50 percent increases reported. Ewes require less supplemental feed during times of increased nutritional need.

Jacob Sheep also lamb easily, usually with no assistance. The lambs rise up and nurse vigorously without help.

Many English shepherds include Jacob ewes in commercial flocks in due to their hardiness, ease of lambing and strong mothering instincts. Rams and ewes both keep easily, with a resistance to parasites and foot problems.

The fleece is soft, open and light in grease. These qualities make it highly sought after by handspinners.

The Jacob Sheep is highly marketable as breeding stock. Farm gate sales of freezer lamb, tanned pelts, handspinnersâ€™ fleeces, horns for walking sticks and buttons bring the breeder financial return as well as the pleasure of seeing this handsome breed on the farm.Â