Within the past century, Nubian goats have become one of the most popular breeds in the U.S. Learn where they come from and their distinctive traits. 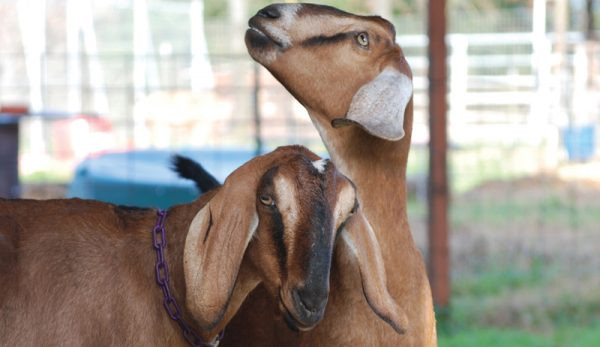 In the late 1800s, imports of Jumna Pari and Zaraibi animals from the Nubian region of Egypt and India were crossed with British goats to create a distinct breed used for meat and milk. Originally called the Anglo-Nubian goat, that designation was dropped in the early 1900s to simply Nubian.

The first imports into the U.S. began in 1906. Today, Nubians are second only to Nigerian Dwarfs in popularity in the U.S. The American Dairy Goat Association registry held more than 14,000 examples of the breed as of 2018.

Read more: Considering gettig goats? There are plenty of reasons to start a small herd!

The Nubianâ€™s swanlike neck, pendulous (floppy) ears and distinct convex (roman) nose distinguish it from all other dairy goat breeds.

One of the larger breeds, does stand 30 inches or more (measured at the withers). Does can weigh upward of 240 pounds.

Bucks are 35 inches tall at the base of the neck. They typically weigh more than 300 pounds at maturity.

The Nubian is a very social breed and has a reputation for being very talkative. This trait, however, normally only occurs during breeding season or feeding time.

Read more: Check out these 7 creative uses for goat milk!

Average production for a mature doe is 1,820 pounds of sweet, rich milk. This butterfat average is 4.9 percent, which is great for home milk use and cheese production.

The Nubian goat’s Middle Eastern roots give the breed an exceptional adaptability to a variety of climates. This allows for a prolonged breeding season, as well as year-round milk and meat production.

Nubian goats can be any color or combination of colors, is a fairly disease-resistant breed and has good mothering instincts.