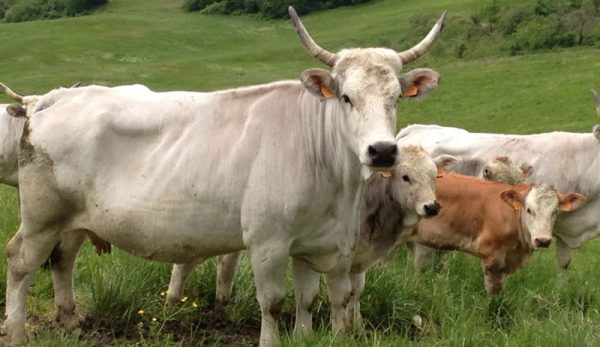 It’s sometimes easy to look at domestic cattle and forget that, as bovids, they share ancestral links to buffalo. Size aside, a quick glance at a well-fed Black Angus lolling in the pasture or a herd of Chaorlais white-dotting a hillside don’t immediately call to mind the mighty hooves of a buffalo stampede.

But some cattle keep that family link front and center. And the massive Romagnola is one such breed.

With an oxen-like physique that calls to mind the primitive draught animals they are, Romangnola cattle boast heavy musculature. Bulls, in fact, can top out at over a ton in weight.

Romagnola cattle originate from Italy. The breed is thought to have derived from eastern European Podolian cattle, though this belief is more hearsay than scientific assertion.

What we do know, though, is that Romagnola (initially a collection of sub-breeds) have long been popular draught cattle in Italy. The creatures historically excelled in this role due to the breed’s short, powerful legs and pronounced musculature in the loin, rump, shoulders and lower thigh.

Powerful beasts, these primitive-looking animals were invaluable to early early Europen agriculture for tilling fields for planting. Meat was a secondary use until the mechanization of agriculture, when Romagnola cattle became considered as beef cattle.

What changed? Well, in the mid-19th century, a breeder named Leopoldo Tosi, of San Mauro Pascoli, began selectively breeding the animals for beef characteristics. Such was his success that the Romagnola took first prize for best beef breed in the at the 1900 Paris International Agricultural Fair.

Read more: Considering cattle? Review these 9 things before adding bovines to your pastures.

The primary physical distinction of Romagnola cattle, which are among the largest of beef breeds, is heavy musculature. Massive foreparts coupled with short, strong legs bely the breed’s former glory as a fieldwork powerhouse.

The average height of bulls is about 5 feet, while cows top out around 4 1/2 feet.

Romagnola cattle hair is white/ivory, with gray around the eyes, ears, neck and thighs. (Bulls display gray around the shoulders, as well.) The coat will thicken and darken in colder weather, and calves are red/wheat-colored at birth to about 3 months olds. The breed has a black hide under its hair.

Read more: Get to know the Droughtmaster cattle breed, an animal that thrives in dry conditions.

Today, farmers and ranchers keep the Romagnola breed primarily for its distinct beef characteristics. But they also benefit from the Romagnola’s maternal capabilities and, notably, climate adaptability.

The Romagnola is the only cattle breed with sweat glands. This unique characteristic allows them to thrive in hot climates. They also adapt well to the cold and to higher altitudes.

In the era of climate change, this wide adaptability could very well prove important.

As an early-maturing breed with good general conformation, this cattle breed (as well as the RomAngus, bred with Angus) offers a number of advantages for today’s beef industry. You’ll find the breed present in pastures throughout the globe.