Once prized for its flavorful meat, the Gloucestershire Old Spot pig was almost developed out of existence. But the hog's back—here's why. 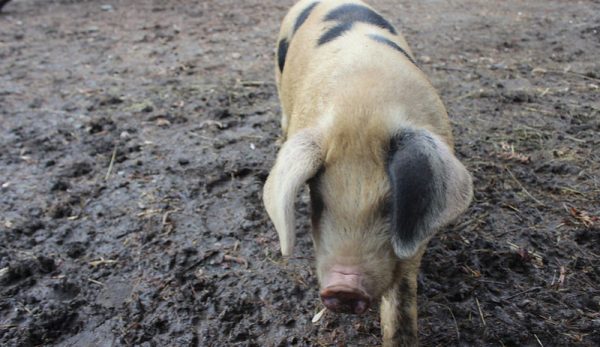 Before my family farm invested in our own breeding pair of Berkshire pigs, my wife and I made a three-hour drive to Peebles, Ohio, every six months or so to procure quality piglets from a breeder. It was inconvenient, sure, but we knew these people raised good pigs.

Pork was sizing up to be the backbone of our small-farm income, so we climbed into the truck, popped in a CD (the truck stereo didn’t have an auxiliary input) and hoofed it to Appalachian Ohio.

We’d settled on raising Berkshires for a variety of reasons, notably the distinct taste of their meat and heritage status. So that’s what we’d planned on bringing back in the little red bumper trailer—10 little Berks. But after a bumpy three-hour drive in an old truck, plans can become malleable.

“What’s that one?” I asked the kid helping us load the piglets into the trailer. “Is that a Gloucestershire Old Spot?”

The floppy-eared piglet was a white spot in the sea of oily black Berkshires. The kid nodded and relayed some story I don’t recall about why the family kept a Gloucestershire Old Spot (GOS for short) with the litter of Berkshires.

There’s some truth to that, though we already knew our Berkshires had a flavor profile many chefs gravitated toward. But that’s not why we ended up paying extra to bring the spotty little fella to our home, where we named him Raylan—a distinct honor for a Kentucky farming family who calls “Justified” a favorite TV show.

Truth is, we just wanted to see a GOS in our pastures.

The Gloucestershire Old Spot, you must understand, has a distinctive look. With a fine, white coat of hair and black spots (it was once known as “The Orchard Pig,” with spots mistaken for bruises from falling apples), the hog is certainly an attractive breed for farmers of pastured pork.

And let’s not forget the ears, those big, floppy appendages that partially obscure the eyes and white eyelashes, and bounce jauntily when the pig bounds across a pen or field. If you’re inclined to find joy in porcine play, watching the gentle-demeanored GOS grow up is a particular pleasure.

For people who are very serious about breed characteristics, the following traits are probably a bit more important than a jaunty disposition:

So if you’re dead-set on a true heritage hog, look out for things like short ears, bristly hair, curved legs, big jowls or wrinkly skin, as these traits could indicate some distillation of the breeding line.

Here are 17 breeds to consider if you want to pasture your pork.

Here’s the thing about the meat of a Gloucestershire Old Spot—it’s got some fat. Not as much as a Mangalitsa or a Guinea Hog, as the GOS is officially a dual-purpose breed (good for pork or bacon). So while it’s one of the more sensible heritage hogs to raise, it’s hardly a lean breed.

And there’s a reason the pork industry works so hard create leaner pigs. (Spoiler alert: It’s not necessarily about human health.) A fat pig yields less meat than a lean pig, so, from an ROI standpoint, feeding a pig that puts on fat means less profit for the pig farmer.

This is noteworthy for most heritage breeds, which haven’t been bred for those higher yields like industry-favored hogs such as the Yorkshire. For comparison, the Livestock Conservancy lists the hanging weight of a GOS at 180 pounds. Typical weight of a market pig such as the Yorkshire, however, is 211 pounds. And it takes longer to reach market weight (500-600 pounds for a GOS) for a heritage breed—much longer if you raise them solely on pasture.

Do smaller-than-expected yields mean the butcher’s a thief? Probably not. (Here’s why.)

For small and hobby farmers, who aren’t looking at razor-slim profit margins from ag industry contracts, this 30-pound discrepancy isn’t an income nightmare. So, for them, heritage breeds such the GOS have distinct advantages.

For starters, the meat just tastes good. In fact, the British Royal Family is known to support the breed because they prefer GOS pork for their tables. The taste improvement is certainly due in part to breeding differences between GOS and grocery-store pork, which I’ve heard described as “tastes like cardboard.”

After all, fat’s tasty.

But GOS pigs are also excellent foragers and grazers, and have historically been kept in orchards to dine on fallen fruit. That can greatly enhance meat flavors. As noted, a keeper could raise GOS solely on pasture, though that would take years to reach an ideal weight.

Some have cut feed costs by providing dairy or other food-/beverage-prep byproducts, and the GOS is particularly good at getting by on these alternative food sources.

Pigs will eat just about anything—but be careful about what scraps you toss them.

The Rise and Fall

So where did the Gloucestershire Old Spot pig come from?

Answer: Gloucestershire, England! The breed hails from the Berkeley Vale, to be specific, and can be traced back to the 1800s.

Beyond that, though, things get a little murky, though it’s believed that the GOS is a result of breeding two pigs that no longer exist: a big, white pig with waddles and no spots called the Gloucestershire, and the unimproved Berkshire (no wonder we loved watching Raylan in our Berk pastures). GOS pigs were shipped to the U.S. in the 1900s, though their numbers didn’t take off.

In 1913, the Gloucestershire Old Spots Breed Society formed in Berkeley Vale to protect the pig’s pedigree against British pig development plans. Good thing, too, because GOS popularity only grew thereafter, reaching a peak in the 1920s-30s, when the breed was favored for its lean meat.

That lean meat characteristic is ironic, though, when looking at what happened next. As intensive pig farming took off and development programs reached for ever-leaner pork, GOS popularity took a nosedive. Between the mid-40s to the 1960s, the GOS breed grew rarer and rarer, finally reaching a critically endangered status.

Happily, things have changed for the Gloucestershire Old Spot.

In part, this is due to a concerted effort to bring the breed back. In 1995, a farm in Maine imported 20 piglets to re-establish the GOS in America. Concerned individuals established a breed society, and, slowly, the breed started to make a comeback.

But most farmers have to have an incentive to raise an animal, and a rediscovery of flavorful pork by discerning eaters provided a good one. Remember the breeder’s son’s claim to interest from gourmet chefs? Our market customers took notice, too, telling us numerous times that our pork (we raised Berkshires, but also Large Blacks and, of course, Raylan) reminded them of “what pork used to taste like.”

So as the market for heritage pork became established, GOS numbers rose. In 2015, the breed was officially moved off the critically endangered list. It’s still officially threatened, but there seems to be a future for Gloucestershire Old Spots.

Will Gloucestershire Old Spots ever become the pig of choice for the pork industry? That’s very unlikely, but for hobby farmers, the friendly, floppy-eared hog could be the perfect pig.