Breed Profile: The Jersey Stands Out Among Dairy Cows

Jersey cows are popular with homesteaders and hobby farmers for their smaller size, dairy production and high-protein, butterfat-rich milk. 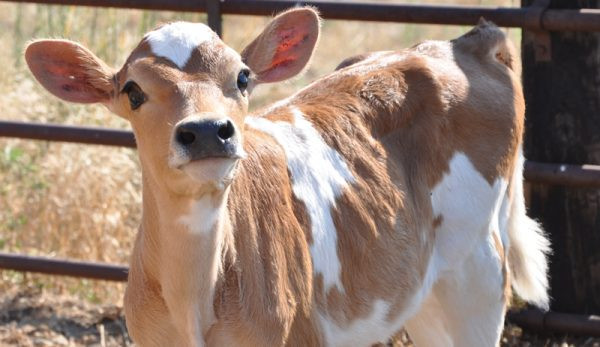 Very popular with homesteaders, Jerseys account for about 7 percent of all cows in the U.S.

This is a smaller-sized dairy breed. Most mature cows weigh about 900 pounds and stand around 4 feet tall at the withers.

Like the Guernseys, Jerseys come from an island, the Isle of Jersey, located in the English Channel between England and France. They were imported to the U.S. in the early 19th century.

Read more: Thinking about getting your first dairy cow? Keep these 7 things in mind.

Jerseys are respected for producing a fairly high quantity of milk relative to their size (about 16,000 pounds per year). This milk is particularly rich in butterfat (4.9 percent) and protein.

It’s true that their total production is lower than that of Holsteins. But their net return (or dollars of profit per cow per year) is higher thanks to their lower feed requirements and ability to stay productive for many years.

â€śCompared to average milk, a glass of Jersey milk has greater nutritional value: 15 to 20 percent more protein, 15 to 18 percent more calcium, and 10 to 12 percent more phosphorous, and also considerably higher levels of an essential vitamin, B12.â€ť

Jersey milk has more protein, calcium and other nonfat solids compared to other breeds.

When a Jersey heifer matures earlier, she can be bred at a younger age and smaller size. Then she can enter the milking herd sooner. This makes Jerseys quicker to generate income for a dairy producer. Jersey cows are renowned for their ease of calving.

Modern Jerseys may be of a wide range in color.

â€śThere is little preference today between the solid and broken colors, although most breeders slightly prefer the cattle with an unbroken color pattern,â€ť according to the Oklahoma State University Department of Animal Science.

â€śMost prefer the dark tongue and switch. But this is more a matter of an identification point than a point of discrimination. The color in Jerseys may vary from a very light gray or mouse color to a very dark fawn or a shade that is almost black.â€ť

Overall, Jersey cows are sweet animals. But in spite of their doe-like eyes and small size, they can also be playful and rambunctious, sometimes to the point of being a nuisance.