Looking for a heritage pig breed with a winning personality, pasturing proficiency and flavorful meat? Look no further than Large Black Hogs! 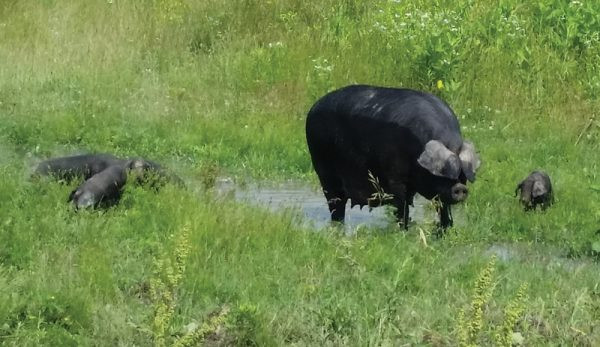 The Large Black is a docile heritage breed of swine originating in England improved from the Old English Hog from the regions of Devonshire and Essex.

Large Black Hogs posses a stellar reputation for mothering abilities. This extends to the boars as well, who often tend the young. Births are easy, with average litters being between nine and 12 piglets.

After an extensive census performed by The Livestock Conservancy, the Large Black was put back on the critically endangered list. Actual registered animals have fallen to a mere 273.

The Large Black Hog Association and the conservancy have been working with Purdue University in Indiana on an artificial insemination project over the past several years.

In February, the program dispersed several piglets born of semen frozen for nearly 20 years. And in July, 25 half U.K./U.S. piglets headed to their forever homes of those who donated sows/gilts to the project.

These incredibly special piglets will, in turn, bolster the Large Black population in the U.S.

Selective breeding and semen collection from these pigs will then be sent to the USDA Germplasm bank. This will ensure that the unique qualities of this breed never go extinct.

Most LBH breeders adore their animals and liken them to having enormous dogs. Each animal has a unique personality. They will graze the pastures rather than rooting like many breeds.

Large Blacks are wonderful additions to most farms, large or small. They may grow slower than other breeds, but itâ€™s well worth the wait.

You can butcher LBHs at any size. Chefs prefer the small size of 240 pounds, while many enjoy the large hog of nearly 400 pounds or more.

The robust and flavorful meat has time to develop the deep, rich rose color that conveys those succulent flavors. Many purveyors of the pork, in fact, comment that they feel as if they never truly tasted pork before enjoying the meat from Large Black Hogs.