One of the rarest chicken breeds in existence, the Onagadori is a Japanese chicken with tail feathers that can reach over 20 feet long! 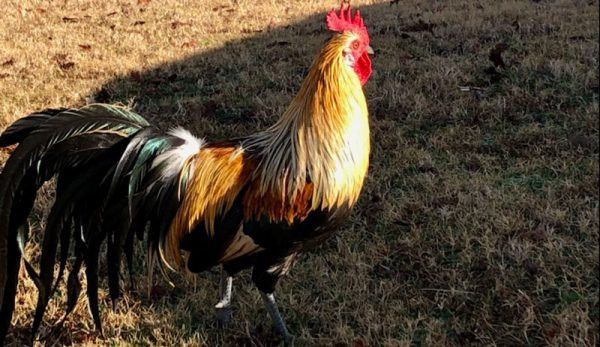 When it comes to ornamental chickens, it’s hard to beat the Onagadori (Japanese for “honorable bird”) breed. What makes this uber-rare Japanese breed so special? For starters, the roosters possess remarkably long tails, with reported lengths reaching as long as 27 feet.

The Onagadori chicken is a Japanese breed, originating in the 17th century in KĹŤchi Prefecture, on the rural, mountainous Shikoku island in southern Japan.

History doesn’t provide too much detail on the bird’s origins. For years, common belief held that the Onagadori derived from crosses of two ancient long-tail breeds, the Shokuku and Totenko. Some held that another long-tail chicken, the Minohiki, also played a part in development.

Recently, though, study of this royal fowl’s genetics led researchers to posit that the Onagadori was, in fact, one of the long-tail foundational breeds. At any rate, the chicken became a hit across Japan in the late 19th century, when farmers, taken with its striking plumage, gladly raised the ornamental fowl.

The breed’s popularity grew to truly special status in Japan. Officially recognized in the early 1900s, Japan declared the Onagadori a Special Natural Treasure in 1952â€”the only chicken breed to earn this “special” designation. At this time, Japan banned export of the breed’s eggs to other countries.

In recent decades, however, this once-popular bird grew rare to the point of near-extinction. As poor egg layers with specialized demands, the Onagadori can only be considered an ornamental breed, with limited appeal to most modern poultry-keepers.

Some believe that, today, pure Onagadoris may only number around 1000 globally. In the U.S., where the breed isn’t recognized by the American Poultry Association, only small numbers of the bird exist, with only a handful of breeders or clubs State-side.

As such, the Onagadori is considered one of the rarest chicken breeds in existence.

A large breed typically weighing in at 3 pounds for hens and 5 pounds for roosters, Onagadori are calm and friendly birds best kept for exhibition purposes.

The hens will lay only between 50 to 100 eggs a year. Hens don’t go broody, but if you hatch the eggs, they make good mothers to the chicks.

Now about those tail feathers. While hens molt normally, roosters do not lose their 16 to 18 tail feathers under optimal conditions. Because of a combination of genes (the “nm” gene in particular), this results in spectacularly long, flowing tail plumage.

These feathers are remarkable, but they’re also the reason this rare breed is best raised by expert keepers. For starters, the birds require close protection. Their trailing feathers make them an easy grab for everything from predators to dogs to even children.

Ideally, they’re raised in secure captivity, away from other animals and chickens breeds.

Furthermore, their tail feathers make for clumsy flying. But, because of their tails, they do need high perches to keep tails display-ready.

Breeders commonly roll up and secure their Onagadori feathers in silk ties.

Onagadori chickens aren’t common outside of Japan due to their rarity and the mid-century export ban. But you might find birds online from a few select providers.

Feather Lover Farms, in particular, breeds long-tail birds. Though, as of this writing, hopefully buyers will encounter an almost year-long waitlist.