Breed Profile: The Berkshire Pig Is An Excellent Animal

Once the preferred pigs of upper-class farmers and royals, today the Berkshire pig is popular with small farmers for its excellent meat and ease of keeping. 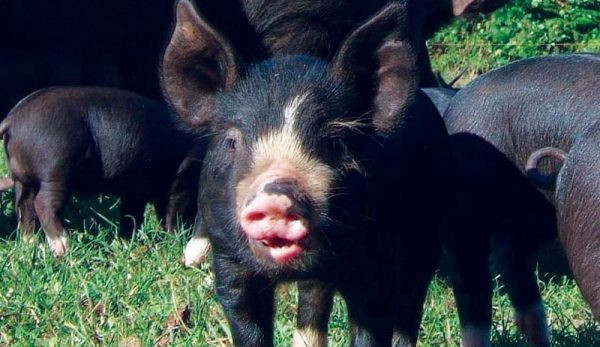 Many farmers call Berkshire pigs their favorite hogs for the breed’s distinctive, high-quality meat and ease of keeping. As such, they are a common sight on small and hobby farms.

Bershires also boast winning personalities and striking black-and-white looks. So it’s not hard to see why people like keeping them!

Three hundred years agoâ€”so legend has itâ€”Oliver Cromwellâ€™s army discovered the Berkshire pig while in winter quarters at Reading, the county seat of the shire of Berks in England.

After the campaign, veterans carried the news of the wonderful hogs of Berks to the outside world. They reported the pigs were larger than any other swine of that time and producing hams and bacon of rare quality and flavor.

This is said to have been the beginning of the fame of the Reading Fair as a marketplace for pork products.Â

The excellent carcass quality of the Berkshire pig made it a favorite with the upper class of English farmers. The pork is whole, well marbled, consistently sweet, tender, juicy and palatable.

According to the best available records, the first Berkshires arrived in the U.S. in 1823. They were quickly absorbed into the general hog population because of the marked improvement they created when crossed with common stock.Â

In 1875, a group of U.S. Berkshire pig breeders and importers met in Springfield, Illinois. Their goal? To establish a way of keeping the Berkshire breed pure.

They felt the Berkshire pig should stay pure for improvement of swine already present in the U.S. The breeders didn’t want to see the breed reduced to only a portion of the common hogs of the day.Â

Feb. 25 of the same year marked the founding of the American Berkshire Association, the world’s first swine registry, heralded by breeders in this country and in England.

In fact, none other than Queen Victoria bred the first hog ever recorded, a boar named Ace of Spades.Â

Today, Berkshires remain a popular choice for farmers seeking a high-quality heritage pig. They do great on pasture, too!