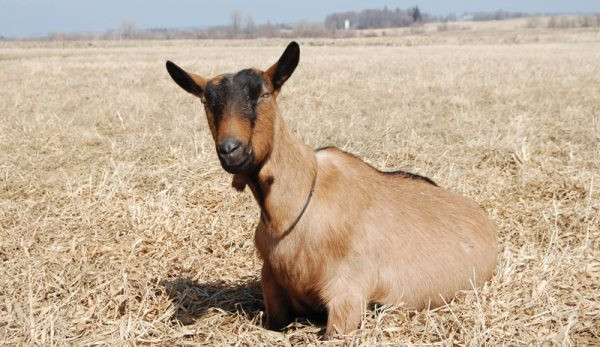 Both popular breeds in the U.S., the Oberhasli and Boer goat breeds are versatile ruminants that fit in well on many small farms.

Switzerland’s version of the Alpine, Oberhasli were originally known as “Swiss Alpines” in the U.S. The American Dairy Goat Association recognized them in 1979 as a separate breed, naming them Oberhasli.

Oberhasli feature a uniquely striking red-brown coat trimmed in black. Does can also be solid black in color. The reddish color is a hallmark of the breed and should not be confused with brown.

While similar to the other erect-eared Swiss breeds, there are some variations in type.

Ears are often smaller and shorter in relation to size, set a bit lower on the head and point slightly forward instead of straight up.

While there is no upper size limit, the minimum height is 28 inches. This moderate size relative to other dairy breeds can be an advantage for some homesteads.

The Oberhasli is laid-back and quiet compared to many of the larger dairy goats.

Additionally, Oberhasli milk can be used for a variety of purposes, but its sweet taste may especially appeal to people interested in drinking it.

Read more: Why get goats? There are a ton of great reasons!

In 1993, the first North American-born Boers were dispersed throughout Canada and the U.S. Boers are now the most popular meat goat breed in North America.

Most Boers are sparkling white with cherry red heads and necks.

Bucks tip the scale at 250 to 350 pounds; does, 150 to 250. Both sexes have sturdy, wide-set horns that sweep gracefully back from their skulls instead of up and out like the horns of other meat goat breeds.

Does are prolific moms (twins are the norm; triplets and quads are common) that give rich, high-butterfat milk. Unlike other goats, many Boer does have four functional teats.

This article originally appeared in the May/June 2020 issue of Hobby Farms magazine.