How To Build A Simple Brick Walkway Through Grass

Using bricks salvaged from a long-forgotten stack that I discovered, I constructed a simple brick walkway leading to a garden. Here's how I did it. 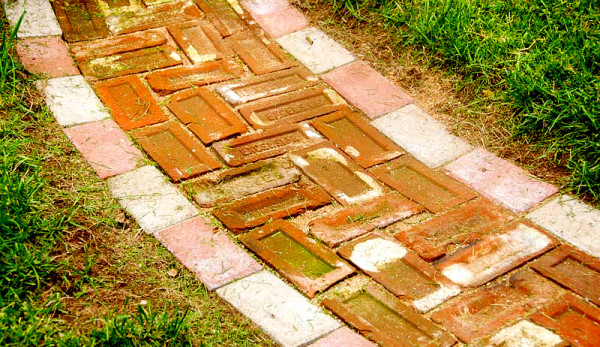 Earlier this year, I described in an article how I found an old pile of bricks buried in pine needles and leaves near a tree on my farm. The bricks had evidently been sitting there for a long time, as they were quite old and weathered; in fact, after doing some research, I discovered that the bricks were at least 70 years old.

I mentioned at the time that I intended to use them for some sort of decorative project, and because I had more than 100 bricks, I decided that the first project would be a brick walkway leading to a garden. After using my yard cart to haul the bricks to the building site (making sure the yard cartâ€™s tires had plenty of air), I was ready to begin.

The first step in building the brick walkway was removing the grass and sod along the path where I would lay the bricksâ€”after all, I wanted the walkway to be flush with the surrounding ground, so simply setting the bricks on top of the grass wouldnâ€™t do. Using a pitchfork to remove the top layer and a shovel to carry away loose dirt and roots, I was able to clear the short path without much time or effort.

Next, I took a small level and laid it across the path at various points to make sure that it was flat from one side to the other. This revealed that the path was actually slanting somewhat from left to right, which would have made the finished brick walkway a little awkward to use. Fortunately, shifting a small amount of dirt from the high side to the low side leveled it out nicely.

Then it was time to start laying the bricks. I had no particular pattern in mind when I began, but soon established one. I took bricks with words inscribed on them (â€śRingleâ€ť or â€śExcelsiorâ€ť) and laid them horizontally so that people walking up the brick walkway could read the words. Blank bricks without words were used any time I needed to lay a brick vertically along the path.

It took a couple of attempts to finalize the layout and get the bricks into a tightly packed pattern (made somewhat trickier by the fact that my path features a mild turn), but before long I had everything laid out the way I wanted. Thus, the final step was to fill in the gaps and lock the bricks into position.

For the outer edges of the brick walkway where it rejoined the yard on either side, I simply filled in the gaps with soil. However, for filling the gaps and cracks between individual bricks, I used sandâ€”the small grains could squeeze into tiny places, and the lighter color gave the path a finished appearance.

After that, the project was complete. Iâ€™m pleased with how the walkway turned out, and the best part is that Iâ€™ve hardly put a dent in my pile of bricks. Iâ€™ve got enough for three or four more short walkwaysâ€”all I have to do is choose the locations and start digging.