Bringing Back The Windmill

Pump water to livestock and your home or aerate a farm pond without electricity using windmills. 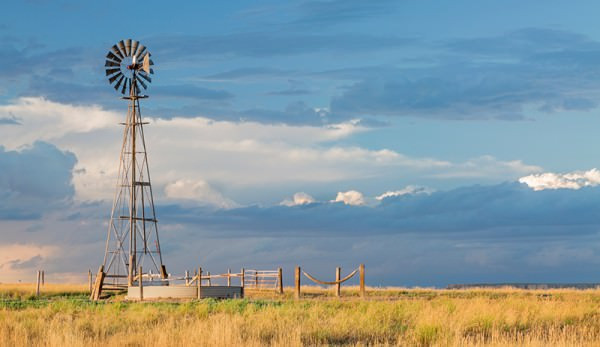 A steady breeze turns the wheel of the windmill, drawing the pumping mechanism up and down into the well. Whether the water is deep inside the well or not too far from the surface, the wind provides the power to move the water where you need it most.

Windmills made much of the American West habitable, where vast stretches of land were without natural standing or flowing water. With windmills, it was possible for early settlers to lift water to the surface for personal and livestock use.

According to Paul Tetrocchi, founder and co-owner of American Windmill, the Aermotor windmill also influenced American manufacturing. At one time, the Chicago-based company was selling as many as 10,000 units per month worldwide.

Regardless of existing water formation‚Äîwell, aquifer, pond or river‚Äîa windmill can move water without electricity.

‚ÄúThe well itself is a narrow hole drilled through the Earth‚Äôs crust,‚Äù Bullock explains. ‚ÄúThe well reaches as deep into the Earth as necessary until it reaches an underground water source. After drilling the well, the walls are reinforced and perforated so that nearby underground water can seep in.‚Äù

Gravity causes the water to rise to the level of the underground water table, in which a sealed drop pipe is immersed for the wind to draw upon.

Windmills move water using a wheel or large fan on top of the structure to capture the wind, Bullock says. As the wheel rotates, wind energy creates a reciprocating up-and-down motion that powers the cylinder pump, bringing up water from underground.

Bullock further explains that the mill can pump the water up into a holding pond, ground level tank or a holding tank on the tower. The tower tanks are typically as high as the windmill. Using hydrostatic pressure, aka gravity, the water from the tank can irrigate a garden.

For more than 120 years, this strategy has efficiently solved the problem of accessing water in places with limited or no electricity.

Selecting a windmill starts with understanding your water source, Tetrocchi says. To help his clients choose equipment, he asks for specifications about their wells: depth, static water level and water output. In addition to these essential specs, he researches customer‚Äôs water needs on a daily and weekly basis.

‚ÄúOnce we determine the needs, we can size the windmill,‚Äù Tetrocchi says. ‚ÄúWindmills can pump from half a gallon a minute to hundreds of gallons a minute. If you want to pump hundreds of gallons, you‚Äôll need a big windmill with a big pumping system. Most users of water-pumping windmills are happy with 2 to 20 gallons per minute to fill a pond or elevated storage tank.‚Äù

The larger the windmill‚Äôs wheel, the more power the mill has to pump water volume.

‚ÄúAn average size is an 8-foot wheel. That can comfortably lift water out of the ground. The deeper the water is, the larger the head will need to be,‚Äù says Duane Miller, owner of Miller‚Äôs Windmill Service in northern Indiana. ‚ÄúThe tower height is also an issue. For a large open field, the tower needs to be 25 to 30 feet tall. However, in wooded areas, it will need to stand 40 to 60 feet tall in order to do the job.‚Äù

Miller sells across six states in the Midwest and spends a lot of time on the phone asking clients questions about their properties. He also uses Google Earth to help determine what windmill best suits their needs, circumstances and purpose by visually scanning the property for obstructions, such as tree lines and rolls or dips in the landscape, that could hinder a windmill‚Äôs efficiency.

It can be challenging to lift water from underground water formations, and in areas where accessing electricity is expensive, windmills are an ideal solution.

When it comes to watering livestock, Bullock uses a chart to determine needs based on individual animals. For instance, a milking cow can drink as much as 35 gallons of water per day. With this information, he can help a client determine how much water is needed for the number of cows in milk production.

According to Bullock, clients also purchase windmills in Texas for aerating stock ponds for fish and wildlife. In these instances, windmills are a supplemental source for maintaining the water level in a pond. There are many variables involved in fitting a pond with a windmill to pump groundwater. Windmills might have the capacity to provide the volume of water needed to fill a smaller pond; however, a larger pond will require a larger mill and a bigger cylinder going into the well. These two elements can mean that solar-powered pumping is a more cost-effective approach.

‚ÄúPeople often want windmills for the aesthetic value, Bullock says, ‚Äúbut realistically, they may be able to do more with solar power.‚Äù

Bullock cautions farmers to be careful when considering windmills for ponds. Other variables, such as wind speed, should be factored into a decision. In drought conditions, it can be difficult to maintain pond levels due to factors, such as evaporation, pond size and ground absorption.

‚ÄúYou put the windmill by your pond, and underwater tubing [connected] to diffuser stones pushes air into the water to aerate the pond,‚Äù Whitiker says.

The Outdoor Water Solutions brand is designed specifically for moving the water in a shallow pond. Whitiker says a construction-savvy farmer can set up the windmill in a single day or weekend, with the assistance of friends or neighbors to stand and anchor the finished mill.

‚ÄúThe nice thing about this brand is that when the wind blows too hard for the mill, it will stop working,‚Äù Whitiker says. ‚ÄúAny time you have high winds, like here in Oklahoma, the windmill stops until wind speeds return to an acceptable rate.‚Äù

The windmill will stop turning when sustained wind speeds exceed 30 mph; it stops itself by turning its head out of the wind until wind speeds fall below 28 mph. If the windmill were to turn too fast, it could damage the diaphragm at the top of the mill where air is collected and pushed down into the pond for aeration.

Whitiker bases her windmill size recommendations on the location of the pond. Because these mills are designed for aerating at the bottom of the pond, tower location determines the tower height. If the pond is in a flat landscape, the height becomes an aesthetic preference for the hobby farmer.

If the pond is in a shallow valley, it might be advantageous to place the mill on a rise and run tubing down into the pond. A taller mill would also be a viable choice, as taller mills are better at maximizing the available wind. The aerating windmills Whitiker sells are available in heights of 12, 16 and 20 feet.

Windmills are an investment, and a well-built and maintained structure can last far beyond its original purpose. Some of Yerian‚Äôs clients purchase used windmills with plans to return them to service. In addition to restoring windmills, he often works with individuals who prefer to maintain their own machines. Either way, he helps them obtain parts that are still available, as well as manufactures and sells replacement parts.

You can use windmills in many other ways to increase sustainability on your farm.

‚ÄúThere are people who are choosing to live off the grid,‚Äù Yerian says. ‚ÄúWhile that is still a relatively small number, interest continues to grow. We have also seen a number of public-works projects that have begun using windmills to pump water for irrigation. For example, a few public schools in Texas water playgrounds and surrounding landscape with windmills. These particular windmills have an elevated tank. There is some recognition that windmills are still being serviced and can be a meaningful form of green, renewable energy.‚Äù

Whether providing oxygen for pond aeration or lifting underground water to the surface for irrigation or watering livestock, windmills have been and remain valuable farm machinery. They‚Äôve been passed down from generation to generation, become collector‚Äôs pieces for those with an interest in their history and remain active tools on today‚Äôs working farms.