The Broad Breasted Bronze, a large meat-producing turkey, has a long history in the United States. 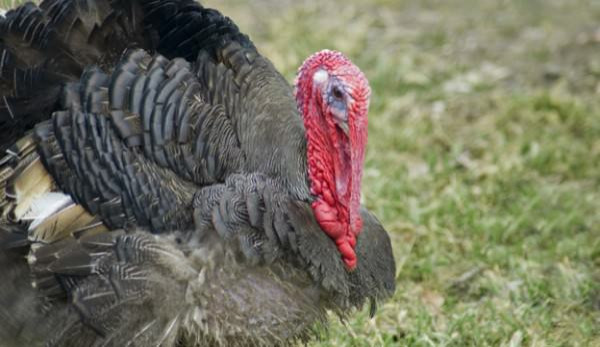 Use: Bronze Turkeys are the heavyweight of the Turkey class. They were developed as a meat producing variety though they are no longer favored in commercial production because of their dark pin feathers.

History: The Bronze was developed in the 1700â€™s in the United States from wild strains of similar coloration crossed with turkeys brought from Europe. This breed was progressively selected for larger breast and legs and became an important commercial turkey until they were replaced with Broad Breasted White turkeys. They were admitted to the American Standard of Perfection in 1874.

Conformation: The American Poultry Association considers all turkeys to be different varieties of the same breed. Bronze turkeys are a dark colored variety with black feathers and a copper-colored bronze band covering much of their body. All turkeys should have a broad body with a large full breast. Legs should be straight and strong, set wide apart. Standard weights: Old Tom: 36 lbs., Young Tom: 25 lbs., Old Hen: 20 lbs., Young Hen: 16 lbs.