Lady Birds: How to Raise Female Chickens as Broilers

Female broilers grow slower than males, yet they have their own benefits and considerations for your meat production. 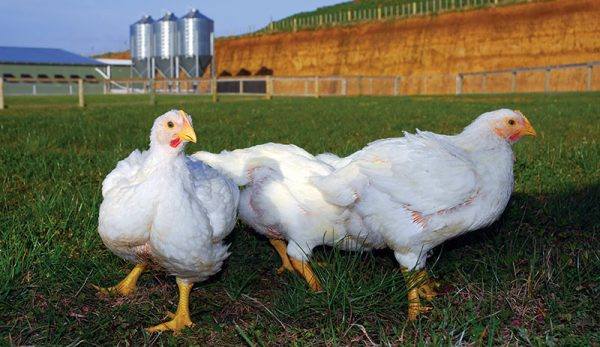 Raising broilers in a small-farm setting brings many options, including the type of housing and feed source as well as choosing breeds and a processing outlet. Another option is the sex of the birds you raise. The differences aren‚Äôt great between raising male and female broilers‚ÄĒyou raise them for only a couple of months, after all‚ÄĒbut the distinctions might be enough that you prefer one over the other.

Large-scale, commercial production includes male as well as female chickens. (In industrial egg production, this is not the case, of course, because only the females are useful.) Not all hatcheries will even sex broilers at birth, selling straight-run chicks instead of providing a choice between male and female. When a hatchery does offer a choice, the cost difference between female broiler chicks and male broiler chicks might be only $0.35, which is not a lot, even if you‚Äôre raising 100 at a time.

‚ÄúFemales actually do better in a backyard system than males because females grow slower,‚ÄĚ says Phillip Clauer, a senior instructor in the Animal Science Department at Penn State University.

By ‚Äúgrow slower,‚ÄĚ Clauer doesn‚Äôt mean you‚Äôll raise miniature broilers. Rather, he means female chickens‚Äô development starts lagging behind males by 0.3 pound or more at about 4 weeks of age, and it takes females a week or two longer to reach market weight, depending on your weight target. This small change makes a difference.

With the bigger-better-faster production mindset of our food system, you‚Äôd think slower growth is a bad thing. But when dealing with the fast-growing chicken breeds most common in broiler production‚ÄĒCornish Cross, in particular‚ÄĒit‚Äôs good to slow a meat chicken‚Äôs muscle-production a bit.

Cornish Crosses are genetically selected to put on muscle so quickly that they commonly experience leg deformities and heart failure. Their bodies grow faster than their structural and cardiovascular systems can develop to support them.

Female chickens‚Äô bone structure develops differently than males‚Äô of the same age. According to a French study, female chickens‚Äô leg bones are thinner but less porous and more mineralized than that of males, particularly earlier in their growth. Paired with a lesser body weight, this trait might contribute to fewer leg deformities.

The Maritime Certified Organic Growers Cooperative terms the fast-growing-broilers‚Äô rather common heart attacks as ‚Äúflip overs‚ÄĚ because the chickens are usually found flipped on their backs after experiencing heart failure. Males of the faster-growing breeds have a higher incidence of this ailment, particularly when they reach 3 pounds and heavier, which generally happens by 5 weeks of age.

Because female broilers‚Äô growth is more regulated, they experience fewer incidences of these leg and heart issues that are detrimental to a pastured-poultry production setup.

The downside of female broilers‚Äô slower growth is the need to feed them more grain over a longer period. It takes only a few days or a week longer to finish female broilers versus males, so it‚Äôs not as if you feed them double their ration, but it‚Äôs worth noting that a female broiler will eat almost 1 1/2 pounds of feed more than a male in the same flock.

According to the University of Kentucky Cooperative Extension Service, at 6 weeks of age, a fast-growing male broiler has eaten 8.19 pounds of feed and will weigh 4.6 pounds. It takes a fast-growing female broiler a week longer to reach comparable weight (4.7 pounds), and by the same time, she will have eaten 9.5 pounds of feed to reach this weight.

Clauer encourages phase feeding for proper growth and development of all chickens. It‚Äôs important to note the difference between feeding young laying hens and feeding young female broilers, as you can‚Äôt lump all of your female chickens into one category of nutritional needs. Laying hens require a lot of calcium and phosphorus in their diets, whereas broilers‚ÄĒeven the females‚ÄĒneed more energy and protein. Feeding broilers a ration designed for layers will result in health and production issues, low weight and poor muscle development.

Two or three distinct feed rations exist: starter, grower and finisher. Sometimes grower and finisher are lumped together into one feed ration. A broiler-starter ration has the smallest particle size. It‚Äôs the highest in protein and should be fed until 3 weeks of age. A broiler-grower ration is fed at 4 to 6 weeks of age. A broiler-finisher ration is the highest in fat, fed to broilers 6 weeks and older. This selection of feeds accommodates for changing nutritional needs over a chicken‚Äôs lifespan.

Because female broilers need feed for a longer period, you might seek ways to stretch your grain dollar. You can do this somewhat in a pasture setting, when done properly.

While chickens kept on pasture don‚Äôt get much nutrition from foraging, you can help that along by planting the right forage for them.

‚ÄúThere isn‚Äôt a lot of nutrient content in grass,‚ÄĚ says Clauer, who compares chickens eating grass to humans eating iceberg lettuce. Chickens might get more nutritional benefits from the insects, grubs, weed seeds and forbs in the field. Clauer encourages planting alfalfa and clover, which are shown to increase nutrients in the meat. According to the National Sustainable Agriculture Information Service, meat from pasture-raised chickens contains elevated levels of omega-3 and vitamin E.

Foraging lets chickens eat what they need to balance their own diets, to a certain extent. The NSAIS reports broilers fed a diet deficient in protein will even forage more to make up the difference, with as much as 7 percent of their protein needs being met in this way.

With some meats, the longer it takes to develop the muscle, the richer the flavor. Clauer says that isn‚Äôt necessarily the case with female broiler meat, probably because the difference in meat development takes place over a matter of days.

‚ÄúIt‚Äôs not taste but fibers of muscles. During that time, their leg and thigh muscles are more active, so they tend to have a harder, more fibrous muscle. Some people translate that to taste,‚ÄĚ he says, although research hasn‚Äôt shown any actual taste difference.

‚ÄúYour bird weights and your carcass conformation will be more uniform across the flock,‚ÄĚ Clauer says. The female chicken carcass will have more evenly distributed breast meat and look neater in a package than the male. They‚Äôll grow more steadily and less ‚Äúcoarse,‚ÄĚ as Clauer describes it.

Slower growth and a longer production time brings increased risk of loss. You‚Äôre responsible for keeping up with these birds‚Äô care for a longer period, including protecting them from predators, keeping them healthy, and spending the time and effort for management.

Regarding the goal of appropriate processing weights, Clauer says you might cull your broiler flock twice. By keeping an eye on everyone‚Äôs growth and development, processing your male broilers a week or two before your female broilers could make sense. You will give the female broilers more time and more space to grow without competition from their faster-growing counterparts.

You don‚Äôt need to keep your females too much longer, though. The faster-growing breeds are developed to be processed early in their lives‚ÄĒeven the females. This is for the chickens‚Äô health as well as your system‚Äôs production efficiency.

When broilers exceed this 6-pound range, it takes about 2 pounds of feed to put on 1 pound of weight. Chickens gain mostly fat at this point, rather than muscle, which helps no one.

Also, the leg and heart issues mentioned earlier are compounded when chickens are raised past this point.

If you have a flock of laying hens, you know female chickens are naturally inclined to roost. When managing female broilers, this is not a concern. Female broilers are too young to show their roosting tendencies. Likewise, egg-laying and brooding instincts don‚Äôt start until at least 20 weeks of age‚ÄĒwell past the viable age of a broiler chicken.

Raising male and female broilers with ample floor or pasture space is important, but you needn‚Äôt factor roost space and nest boxes into your housing plan.

In a small-scale setup, males as well as females can do well, but Clauer prefers female broilers when the option is offered: ‚ÄúThey do hold their legs,‚ÄĚ he says. ‚ÄúThey do grow more uniform. They do seem to do a little better in [a pastured] setting, in my experience.‚ÄĚ

Now, when your chicks arrive from the hatchery, if some grow slower, eat less and fill out differently than others, you needn‚Äôt worry. These are probably the females, and they‚Äôll produce very well when given the chance.

Freelance writer Lisa Munniksma is the former editor of Hobby Farms magazine and the writer of HobbyFarms.com‚Äôs ‚ÄúThe News Hog.‚ÄĚ She left the office for the farm in 2011 and is now part of an organic vegetable and livestock farm in Kentucky. During the winter, she travels to warm climates to learn about farming in other parts of the world. Follow her on Instagram: www.instagram.com/freelancefarmerchick