Brood X cicadas emerge from their 17-year slumber this year. Here's how the cicada could affect your pets, livestock and young trees. 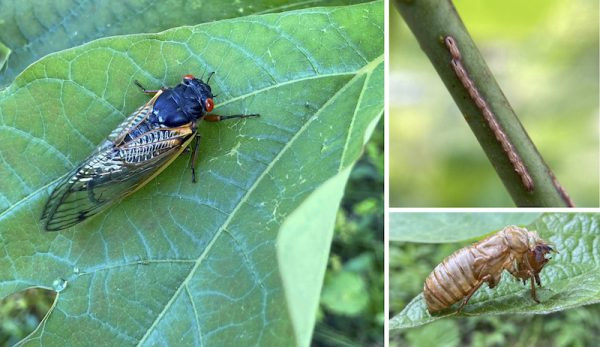 The last time they made an appearance was a whopping 17 years ago. Based in Bloomington, Indiana, at the time, Keith Clay experienced â€śBrood Xâ€ť for himself in 2004 and 1987.

â€śNinety-nine percent of the lifecycle is below ground where you don’t see them. But when they come out of the ground it’s pretty amazing,â€ť he says.

Clay is an Indiana University Department of Biology distinguished professor emeritus. He has since moved to New Orleans to chair the Department of Ecology and Evolutionary Biology at Tulane University.

Read more: Cicadas? Locusts? Here are the differences between the bugs.

The 17-year cicadas will number in the billionsâ€”and they’ll make a real racket. â€śIf you heard it in 2004, it’s kind of a science fiction-y, alien-sounding thing,â€ť Clay describes. â€śIt ebbs and flows and can get louder and louder. It’s incredibly intense and then it dies down and then it starts up again.â€ť

They’ll make an impression in other ways during the few weeks that they spend above ground. â€śWe had a dog that just stopped eating his food because he was eating so many cicadas,â€ť Clay recalls.

Dogs, cats, chickens, turkeys and other livestock positively love chowing down on the edible periodical cicada. So do people with relatively adventurous palates. (Some say cicadas taste like asparagus. Others suggest they’re more like seafood.)

There are some caveats though. People and pets with shellfish allergies might have adverse reactions. The large, rough insects could be a choking hazard, too.

Wild animals also eat their share. If you live in a Brood X state and you’ve noticed more mole activity lately than you’re used to, 17-year cicadas may be just under the surface.

â€śOne of the early warning signals [for cicada emergence] is mole activity in lawns,â€ť Clay explains. â€śYou can see these mole hills where the soil is piled up and they form these underground runways. The moles are gorging on these cicada nymphs below ground…. It is a lot of food for animals that forage below ground like moles do.â€ť

Read more: Got moles? Move them humanely from your property.

Because there are simply so many 17-year cicadas, widespread predation doesn’t seem to slow the species down. Still, if you have young trees, you just might wish that something could stop the insects.

â€śThey’re basically parasites on trees,â€ť Clay notes. â€śThey spend 16 years and 11 months feeding off of the root systems of trees.â€ť

And after they emerge? â€śThey climb up something and molt to the adult stage,â€ť he continues. Adult males then head for treetops to call to and subsequently attract potential mates. And, for their part, adult females lay their eggs inside small tree branches.

Usually, they choose twigs that are about the size of a pencil. They’ll puncture these with their ovipositors and leave behind rows of eggs. Upon hatching, the young cicadas will burrow deep into the soil for the next 17 years.

As Author Robert E. Snodgrass described in his 1930 work, Insects: Their Ways and Means of Living, â€śSoon the twigs of trees and shrubs are everywhere scarred with slits and punctures where the eggs have been inserted. In a few weeks the noisy multitude is gone, but for the rest of the season the trees bear witness to the busy throng that so briefly inhabited them by a spotting of their foliage with masses of brown and dying leaves where the punctured stems have broken in the wind.â€ť

If you have very young trees you hope to protect, you might want to shield them using large tomato cages covered with very fine netting or floating row cover. Use landscape staples to secure the material over the tomato cage and into the ground.

Overlap separate pieces of fabric as needed. Look carefully for any unprotected areas that a cicada might be able to sneak through.

Finally, if you had planned to install some new shrubs or saplings this spring, you might want to keep them potted up and stored safely indoors until the 17-year cicadas have gone for good.