The BueLingo is a moderately framed, composite beef cattle breed, developed for its quickly maturing beef and its beautiful white stripe along the midsection of the body. 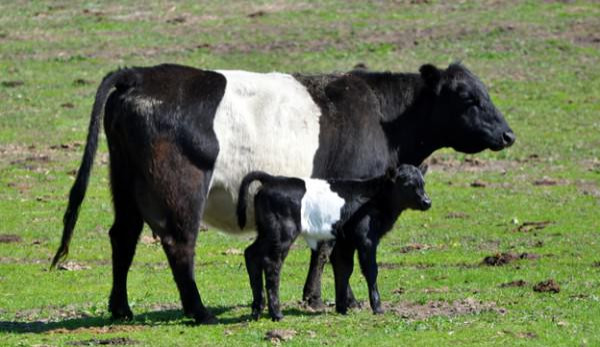 Use: The BueLingo is a moderately framed, composite beef cattle breed, developed for its quickly maturing beef and its beautiful white stripe along the midsection of the body. While the breedâ€™s appearance attracts attention on pasture, itâ€™s most noted for its tasty, lean beef. Producers aim to process steers or heifers by 18 months of age, for an average carcass weight between 600 and 650 pounds. Carcasses require very little trimming and produce a desirable rib-eye averaging 11.3 to 11.5 square inches.

History: In the late 1970s, a respected cattle rancher by the name of Russ Bueling had the vision of developing a cattle breed that would not only be an asset to the beef industry, but also exhibit aesthetic qualities that would benefit the agricultural landscape. Working with Russ Danielson, of North Dakota State Universityâ€™s Animal Science Department, and Alfred Ostrum, a cattle rancher from Montana, Bueling started with the Dutch Belted cattle breed and incorporated other bloodlines, including the Lakenvelder, Angus and Chianina, using a strict breeding plan that focused on hardiness, a quick growth rate and a lean carcass. In 1988, the BueLingo Beef Cattle Society was founded with 200 registered animals and today continues to focus on beef quality with consumerâ€™s tastes in mind.

Special Considerations/Notes: While BueLingo cattle are renowned for their production efficiency, theyâ€™re also a gentle breed with excellent mothering abilities. They are very fertile and produce vigorous calves at desirable and consistent calving weights. The breed is also extremely hardy to both warm and cold regions, which has attracted the attention of both hobby and commercial grassfed and organic farmers.