Ducks Unlimited and other companies like it can help you turn soggy areas of your land into a pond that attracts wetland wildlife. 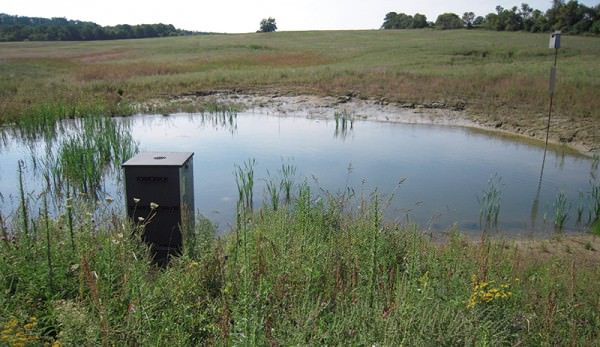 Bitten by the promise of spring on our new farm, one of the first notions my wife, Darlene, entertained was to park a picnic table under the enormous shady maple along the back of our property. From there, on the highest point, we could survey our new domain and admire the view. Great idea, I thought, as we heaved the cumbersome table onto our pickup and headed for the back 40.

As we motored over the field, not yet seeded in crops, it occurred to me that a smart country dweller would be on the lookout for wet spots this time of year, lest the truck get mired in low-lying ground. Alas, as soon as the light dawned, it was already too late, and we were up to our axles in mud. Engaging the four-wheel drive only sunk us farther. I blanched with embarrassment. Darlene laughed. She handed me her cell phone and told me to call a tow truck. As we waited to be rescued, she pondered, “If nothing else, we’ve found a great spot to build a pond someday.”

She was joking, but a couple of years later, we did indeed build a pond on that very site. It all came about when a friend suggested we get in touch with Ducks Unlimited, the nonprofit wetlands and waterfowl conservation organization. He had heard that it was looking for private landowners willing to allocate portions of their rural properties to wetland conservation. The organization would offer advice on design, excavation and construction; moreover, they would go to bat for us as the project went through the permit process with our local government.

It sounded too good to be true, but it wasn’t. A conservation-minded charity, Ducks Unlimited is in the business of creating and maintaining wetland habitats. It exists to abate the continent-wide decline in wetlands, thus encouraging duck and other waterfowl populations. The ultimate goal is to ensure there are plenty of ducks for duck hunters to hunt in the future, but even if you don’t agree with hunting, you have to admire the group’s work.

No one in public or private sector builds more wetlands than Ducks Unlimited. Compared to some of their projects, which can reclaim hundreds of acres, ours was small potatoes but still worth their while. It seems every little bit helps.

The Ducks Unlimited reps got a good chuckle when we told them about our misadventures with the picnic table. Looking uphill at the lay of the land, they decided they liked our site, noting it would be a good choice for a wetland because it was already wet and because it formed a natural funnel that would easily gather rainfall from further uphill. To create a basin that would contain the water, Ducks suggested an impoundment berm or levee be built across the downhill end of the funnel. This would be enough to dam up to four acres, most of which would be less than a foot deep, ideal for dabbling ducks. Any deeper and we would attract more geese than ducks, which almost defeats the point of conservation in that geese numbers don’t need our help these days, thanks to their penchant for city parks.

From the start, this strategy—damming a natural funnel to form a basin—was preferred over digging a hole from scratch. Because it would require less excavation, it was less expensive, but more to the point, it was also more likely to meet government regulations.

“The rules vary,” Ducks Unlimited said, “but generally, it’s not wise to dig too deep. You could easily breach an underground spring. This could affect neighboring wells or upset the natural flow of water.”

Municipalities frown on this, and it’s much easier to get a permit for a project that doesn’t tamper with groundwater.

There is, however, more to creating a wetland than a basin and a dam. Something is required to manage flow; otherwise, the water go stagnant or, worse, overflow the banks. This is accomplished with a culvert that lies at the bottom of the pond and pokes through the width of the berm. It acts like the overflow drain in a bathtub, but to make sure the pond doesn’t run dry, the water level can be adjusted.

On the shore, directly above the culvert, stands a metal box—officially called a “water-control structure”—that contains a number of removable plates, each 12 inches high, stacked on top of one another. To raise the water level, more plates are fitted into place, thus blocking the water flow. To lower the level, plates are removed to let the water run unencumbered.

Construction started on a blustery day before the ground froze in December, and within a day or two, the crew had excavated enough earth to complete the berm and install the culvert. With the box and plates in place, the pond immediately began to collect rainwater and snowmelt the following spring. Sure enough, the level rose faithfully, and the first sign of life—a host of tadpoles—found a home in the warm shallows.

At the time, the landscape was barren, but we were told not to plant anything, save for a grass path along the crest of the berm. Accordingly, the vegetation soon took care of itself. Bulrushes moved into the water and the banks were a mass of asters, goldenrod and other meadow species. Before fall, the pond looked and functioned like a natural ecosystem. It even attracted a family of ducks.

Every year since, at least one pair of ducks has raised a brood in our wetland, and the variety of wildlife continues to surprise us. We like to watch the swallows dart over the water and likewise, the population of red-wing blackbirds has been truly astonishing. One spring, the spring peeper frogs were croaking so loud we had to raise our voices to be heard over them, and that summer, we saw little green herons, as well as the more common great blue.

A good place for landowners to turn to for advice on pond construction is the Ducks Unlimited website to contact the chapter in your state. Ducks Unlimited doesn’t usually handle construction of smaller ponds on private property, but staff can connect you to programs that could help pay for your project. Indeed, a number of nonprofit, state and federal programs exist to help fund wetland restoration and protection on private property. Funding sources range from U.S. Farm Bill programs to grants from the U.S. Fish and Wildlife Service to certain sources of state funding.

The eligibility of each project is based upon the type of wetland project under consideration and location, among other factors. Ducks Unlimited staff often can help coordinate funding or provide technical assistance in seeking grant funding. Certain grant sources require matching dollars in order to access grant funds.

Remember, the purpose of a manmade duck pond is to mimic a natural environment and, in turn, encourage waterfowl and other wildlife. This may be at odds with your vision of the project, especially if you have a swimming hole or a fishing pond in mind. The latter especially requires deeper water and more extensive excavations that are probably beyond the scope of a simple duck pond. Even so, excavations will likely be extensive enough so that at least a small area can be set aside as an open-water swimming area.

Selecting a site depends more on the natural terrain than on any other factor. Look for a patch of spongy soil, a swale that is always wet or some other natural depression. Follow the natural grade of the land and analyze the direction in which runoff water flows. Is there a natural basin? Is there a logical location for a levee? Is there a spot where springs rise to the surface? Look also for naturally occurring plant species—willow, arborvitae, dogwood, swamp maple—that are attracted to wet locations.

You won’t get the final say as to your pond location: Your local government or watershed advisory board will determine this through its conservation policy. The permit process varies from town to town and state to state. Make sure all permits are in place before construction commences.

At the first glance of your finished pond without a living twig in sight, it will be tempting to run to the local nursery, but the truth is that the naked shoreline will soon seed itself in natural plantings, especially bulrushes and reeds. There is no need to purchase landscape specimens. Still, you might be tempted to plant blue flags, the wild native cousin of the garden iris, which are slow to take hold even in the most hospitable wetland setting. If you insist on giving the landscaping a head start, choose native species that thrive in wet locations. Contact your local conservation agency to inquire about reforestation programs in your area. Tree seedlings should be mulched to give them a fighting chance until they are established against meadow flowers.

Likewise, wildlife will appear with no encouragement from you. Within the first year, you’ll quickly learn that duck ponds attract more birds than just ducks. Birdwatchers will be keen to keep a list. Meanwhile, amphibians and turtles will appear out of nowhere, as will mammals, such as deer and muskrats. Most farm ponds,however, are not large enough to sustain a population of beavers or otters.

Ducks Unlimited is particularly interested in encouraging the wood duck, a prized species whose numbers have taken a hit due to habitat loss. To this end, they’ll sometimes provides pond owners with a nesting box specifically designed for this species.

With any luck, there shouldn’t be any maintenance whatsoever. After all, the pond is intended to act as a miniature natural ecosystem, so let nature take its course. But keep the following in mind:

Not long ago, Darlene suggested we haul the picnic table—yes, the very one that started this saga—down to the dam so we have a perch from which to keep watch. I think it’s a good idea, but this time, I’ll know better than to get stuck along the way.

This article originally ran in the March/April 2016 issue of Hobby Farms.

Tom Cruickshank is a writer for Hobby Farms magazine.