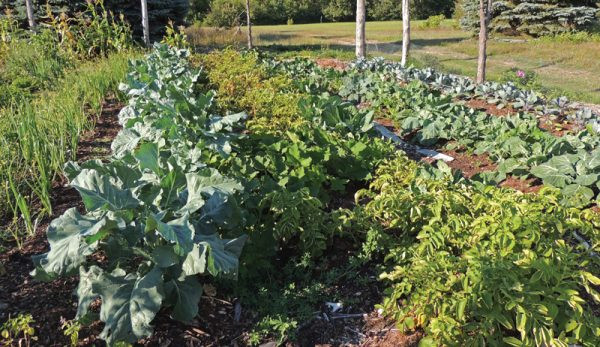 Healthy crops start with healthy soil. Probiotic farming not only makes your soil healthier, but it also offers a wealth of other benefits for farmers who want better crops while improving the growing area and the environment as a whole.

What Is Probiotic Farming?

In this sense, probiotics in farming act as supplements for the soil and ultimately the plants. The more beneficial the bacteria, the more fertile the soil, which potentially maximizes your crop yields while also limiting the need for harmful chemical-based fertilizers and pesticides.

In 2018, Luke Heidt, owner of Wisconsin Hemp Flower in Eau Claire, Wisconsin, (also the¬† author of Luke‚Äôs Hemp blog) realized that he was a probiotic farmer.

‚ÄúProbiotic farming is a generic term for the best organic practices to increase the life in the soil and to feed the plants by feeding the soil,‚ÄĚ he says. ‚ÄúPlants do better when they are healthy. Healthy soil makes healthy plants.‚ÄĚ

Ready to begin composting? Here’s how to start today!

Probiotic farming is a technique nearly any farmer can use to provide nutrients their crops need to flourish.

Plant probiotics is a promising alternative for soil fertilization. It improves crops while also protecting the land, without any adverse effects.

Synthetic pesticides and fertilizers can deplete the soil and hinder, or even kill, beneficial microbes that help plants grow strong and healthy. But probiotic farming strengthens the soil by reintroducing beneficial bacteria to help the soil remain fertile and even regenerate from previous damage.

By using a variety of probiotic farming practices, beneficial bacteria thrive and crops benefit from a healthier growing environment.

Probiotics also increase some plants‚Äô resistance to certain pests and disease. When plants are protected by a healthy probiotic habitat, they‚Äôre better equipped to deal with insect attacks. They also gain an increased immunity to molds, disease, pathogens and other stresses.

Probiotic farming uses a variety of techniques, including organic practices already used in a wide array of agricultural endeavors.

Have you previously utilized any of the following?

If so, you may already be using probiotic farming practices without even realizing it.

Composting is a simple concept with a long history in organic gardening and farming. Already used by farmers and gardeners across the country, composting is considered a vital probiotic farming technique that helps build up the soil.

A lot of composting occurs through aerobic systems, which simply means it‚Äôs done aboveground. The microorganisms require oxygen to break down waste and promote bacterial growth.

Aerobic systems often utilize bins in which you turn your compost heap with a pitchfork or shovel. Tumbling composters exist, too, and only require a few spins to turn your heap.

Composting provides you with an environmentally friendly way to dispose of kitchen waste and a good use for livestock manure. It also provides much needed nutrients and beneficial bacteria for your soil and crops.

However, in aerobic systems, you never want to compost dairy products, meat or bones, oils, human waste, or pet waste from cats or dogs.

‚ÄúOn our farm, we have an abundant supply of composted and aged cow manure from our beef cows,‚ÄĚ Heidt says.

‚ÄúThis compost is what I prefer to use before planting our vegetable gardens. It is tough to beat a garden grown in abundant piles of local compost. Heavy feeding plants, such as hemp, chilies, corn, etc. seem to get an increase in size from lots of compost, as well as aerated compost tea and homemade herb teas.‚ÄĚ

Check out these 4 tips for building soil from scratch.

In Japan, using probiotics in agriculture dates back to at least the 17th century when farmers developed concoctions called bokashi to help feed and protect their crops. Bokashi is a Japanese term that in horticulture basically refers to fermented organic matter or an organic waste fermentation-process.

The most common use for bokashi is as an inoculant in anaerobic composting. You can also add it to an aerobic compost heap, use it to create compost tea to use during watering, or add it directly to your soil.

Bokashi is typically made by combining wheat bran, water, molasses and essential microorganisms (EM). Considered a microbial inoculant, EM is the source of beneficial microbes that give bokashi bran the ability to devour composted matter.

Without EM, your bokashi won‚Äôt work. You can make your own version of EM, which is basically a combination of lactobacillus bacteria, phototrophic bacteria and yeast.

But many farmers tend to buy the proprietary formula available commercially.

Bokashi composting is a specific type of anaerobic composting that allows you to compost all kinds of kitchen scraps, including meat, dairy and other products you can‚Äôt put in aerobic systems.

Bokashi composting is a lengthy but simple process:

When you reopen the bucket, everything will be thoroughly pickled and highly acidic. You must bury the content in a fallow spot for another two to four weeks before it can be safely used on plants without damaging roots.

Adding compost tea enhances microbial life when applied to the soil or sprayed directly onto a plant‚Äôs foliage. It works hand in hand with composting to help ensure you have a diverse array of microorganisms in your soil ecosystem.

Over time, Heidt learned that adding additional compost teas and plant teas led to further increases in the quality of the garden. The plants are healthier and the yields are higher.

Heidt started making my own compost teas around 2009. Aerated compost teas were starting to get some attention online, and he visited a compost tea brewing company in Humboldt County.

‚ÄúAerated compost tea is a very cost-effective way to add a small amount of nutrients and a very large amount of beneficial ingredients including bacteria, fungi and other beneficial microorganisms directly to the area around the plants,‚ÄĚ he says.

While compost tea can be an important soil amendment, you can also amend your soil with other natural ingredients.

Various soil amendments help support your microorganism population by providing additional food before, during and after a growing season‚ÄĒa vital part of probiotic farming.

Tilling in fresh amendments builds up the soil and maintains optimal nutrients for the upcoming growing season. Adding amendments during a growing season gives microorganisms something new to break down and provide to the crops.

Some common soil amendments include the following.

Avoiding commercial fertilizers that may include chemicals is a must in organic farming and just as important in probiotic farming.

Compost and compost teas are popular forms of homemade fertilizers. You can also use grass clippings and leaves¬† as both a fertilizer and mulch, and many weeds make an excellent tea.

‚ÄúEvery year, I have been interested in learning about the best organic practices from around the world,‚ÄĚ Heidt says.

‚ÄúIn 2010, I realized that farmers in France were using nettles soaked in buckets of water as fertilizer. This seemed remarkable to me, because I had never considered using the abundant nettles around our farm as fertilizer. A light bulb clicked, and I have been on the path of homemade fertilizers and compost teas ever since.

‚ÄúWith just a bucket, or a trashcan if you want to go big, and local weeds, you can produce large amounts of liquid fertilizer. Nettle is my favorite. A word of warning though‚ÄĒunaerated liquid fertilizers made with nettle smell really, really bad!‚ÄĚ

Probiotic farmers typically use the best organic practices from a wide variety of alternative practices. This allows them to combine the methods that best support their endeavors while also creating the healthiest soil to sustain their crops.

‚ÄúFarmers, such as myself, have begun to look at Korean Natural Farming and its relative in Korea, JADAM, for inspiration,‚ÄĚ Heidt says. ‚ÄúIn KNF and JADAM, local ingredients are used to make inexpensive liquid fertilizers that contain probiotics.

“Organic farmers can‚Äôt afford to buy liquid fertilizers, but they can afford to make their own. JADAM and KNF provide many recipes for making homemade fertilizers.‚ÄĚ

Established in 1991, JADAM is a group of organic farmers whose goal is to bring farming back to the farmers while also spreading an ultra-low-cost method of farming. Their efforts include sharing a do-it-yourself system of making natural pesticides and liquid fertilizers that are also organic, environmentally friendly and just as effective as expensive commercial versions.

KNF incorporates numerous farming techniques that includes making your own plant supplements, fertilizers and pesticides by using the microorganisms native to your area.

Many probiotic farming practices originated from KNF practices. Some of these include transplanting beneficial indigenous microorganisms into your farm ecosystem and using fermented plant extracts to create organic fertilizers.

‚ÄúThere are likely to be herbs and weeds right next to where you live that you can use to make your own fertilizers for your plants,‚ÄĚ Heidt says.

‚ÄúHomemade fertilizers plus compost tea are two of the most effective ways to grow healthier plants on a budget.‚ÄĚ

The concept of probiotic farming is fairly young in comparison to other farming practices. But many farmers believe it not only reduces costs but also benefits the earth in bog ways.

Each individual component of probiotic farming helps your soil and plants in one way or another. But when you combine farming practices to match your specific crop(s) and growing conditions, you can create an ideal growing environment for larger, healthier crop yields without disrupting nature.

‚ÄúResults matter,‚ÄĚ Heidt says. ‚ÄúAdvanced organic farming produces superior products. Farmers need to produce products that stand out. Probiotic farming gets results for less money while maintaining the health of the environment and making sure you leave the land better off than how you found it.‚ÄĚ

Sidebar: Mix Up a Batch of Bokashi

You‚Äôll find lots of recipes online for various types of bokashi bran and ready-made products if you want to skip the time and energy required to make your own. Here‚Äôs the recipe and mixing method for a bokashi bran plus mixture as demonstrated by a local small-scale organic farmer in Central California.

It should have a sweet somewhat vinegary smell. Once dried, your bran can be packaged and stored.

This article originally appeared in the May/June 2020 issue of Hobby Farms¬†magazine.

Moira K. McGhee spent many days on her grandma‚Äôs farm. Chasing chickens, being chased by cows and picking tons of vegetables. Now she picks her own crops and chases chickens on a hobby farm with her husband. See what else she writes about at www.moirakmcghee.com.