Build a Raised Bed High Tunnel to Extend the Harvest

Extend your harvest with this simple season extender. This raised bed high tunnel is made to fit existing raised beds and takes only a few hours to build. 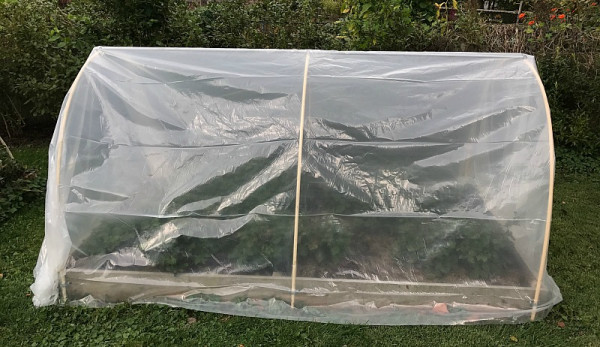 Season extenders are popular gardening tools these days. They let gardeners give cold-tolerant crops an extra layer of protection, allowing a prolonged harvest. With season extenders in place, even northern gardeners can harvest kale, lettuce, chard and root crops well into the winter. But, buying or building a traditional cold frame or hoop house can be a time-consuming and costly affair, leading many gardeners to not bother. If you garden in raised beds, however, this quick project can turn your garden into a raised bed high tunnel in just a few minutes.

After gathering your materials, begin by attaching the one- or two-hole strap brackets to the bed.

Screw the first bracket into one of the long sides of your bed, about one to two inches from its corner. Make sure the bracket is about two inches above the ground. The second bracket gets screwed into the same position on the opposite end of the same long side. The third bracket goes between the two, at the center of the long side of the bed.

Step 2: Repeat on the Other Side

Repeat the process with three strap brackets on the other long side of the bed, keeping them opposite of the first set you installed.

For raised beds that average four to five feet across, the PVC pipe will not have to be cut, but if your bed is more narrow, or you want the hoops to have a lower profile, cut all three pieces of 1/2-inch PVC down to an appropriate size before installing them into the brackets. For my 4-by-8-foot bed, there was no cutting required.

The next step in building a raised bed high tunnel is to add a center support to the arches. This prevents the arches from folding in windy weather. To make the center support, measure the height of the center arch from the ground to its high point. Then add eight inches. Use the pipe cutter to cut a piece of the EMT conduit pipe to that length. Hammer one end of the piece of EMT conduit pipe into the ground until the top of the pipe sits at the high point of the arch.

Next, you’ll need to cut another length of the EMT conduit pipe that’s long enough to create a top support rib that runs from one end arch to the other. Lash it to each of the arches with a pair of crossed zip ties, making sure the center support pole is lashed in as well.

(In my example, rather than using one long piece of EMT conduit pipe, I used two smaller pieces, lashing them together with zip ties at the center arch.)

Once the frame of your raised bed high tunnel has been erected, cover it with a sheet of 6-mil plastic.

Make sure the piece of plastic is large enough to fully cover the arches and extend all the way down over the lip of the raised bed on all four sides.

Fasten the plastic to the raised bed frame, pulling the plastic taunt as you go. In my example, I used a staple gun to secure the plastic to the bed, leaving one end of the bed unstapled to allow me access to harvest the crops. That end is weighed down with a few bricks, instead of being secured with staples.

If you don’t want to use staples, you could place the plastic snug against the bed’s frame and hammer or screw lengths of furring strip board over the plastic to hold it in place. You could also simply use rocks or bricks to keep the plastic in place.

Once the plastic is securely fastened over your raised bed high tunnel, all that’s left to do is make sure that heavy ice and snow don’t put too much pressure on the tunnel during the winter months and cause it to collapse. I visit my bed and sweep off the snow whenever more than an inch or two accumulates on top of it.

With this easy-to-make raised bed high tunnel, you’ll be enjoying harvests of homegrown greens, root crops and other cold-tolerant veggies for weeks to come!