Not only aesthetically pleasing, bottle walls are also quite strong. 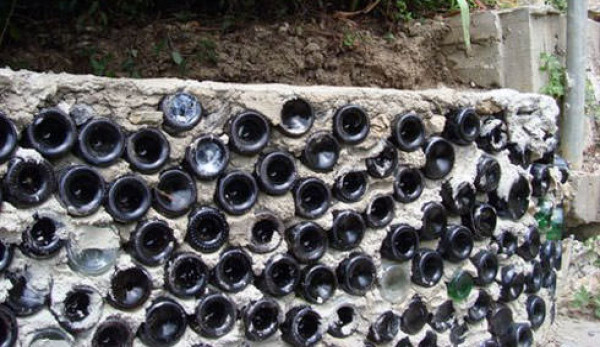 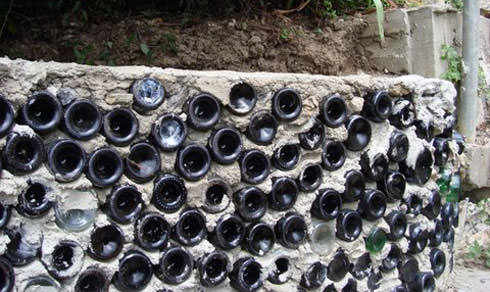 My bottle wall is really coming along! These walls are sturdy and, when done properly, look great.

My finger has finally healed to the point that I can work with my hands again. Whoopee! Thanks to this, Iâ€™ve been building a new bottle wall in the garden to create a new terrace area for planting. Aside from having to carry sacks of cement up the cliff, it is ridiculously easy â€” Iâ€™m pretty sure monkeys could do it, too.

Basically, I just stack the bottles with a slop of concrete in between, leaving the butt end of the bottles exposed and the necks on the unseen, inside of the wall. When I reach the desired height, I make a flat and level top area, upon which I put a row of red clay bricks. This last step is a unifying decorative touch that pulls the sprawling set of terraces together and makes them all seem to be part of a whole. I think this aesthetic is an important part of the project.

When I started building the bottle walls, I had no idea I was part of an almost-movement. I got the idea from some old buildings made from bottles that Iâ€™d seen in ghost towns in Nevada when I was a kid. All the old wood buildings in these ghost towns were slowly crumbling, but the bottle houses were still intact.

It turns out, bunches of other people are also building things out of bottles. So far, the best bottle structure has to be an entire Buddhist temple built of Heineken and Chang beer bottles in Thailandâ€™s Si Sa Ket province. On the other end, lots of crazy artists have built really crappy-looking houses, but those are outnumbered by the many projects that simply used bottles instead of bricks when building walls. If one Googles “bottle building images,â€ť pages and pages of pictures of various bottle structures will appear â€” pretty interesting.

The work on the new Urban Farm University in Amsterdam has been going along rather well, considering the project is only about two weeks old. I’ve been spending most of my time these days writing plans, filling out application forms and studying Dutch. The complex we are envisioning already has a few buildings but we need to build more dormitories, work sheds and greenhouses. Weâ€™ll be using bottle walls in all of these cases wherever appropriate.

Iâ€™m not sure what the term is for recycling something without reducing its form. Perhaps upcycling? Instead of reducing a bottle to molten glass and making a new bottle, upcycling recycles the bottle in its original form. One of the first research projects of the university â€” already underway â€” is an investigation into the various ways in which we might be able to upcycling materials found in the trash stream.