The photo at right shows the new beds I’ve made on the southern border of the garden. 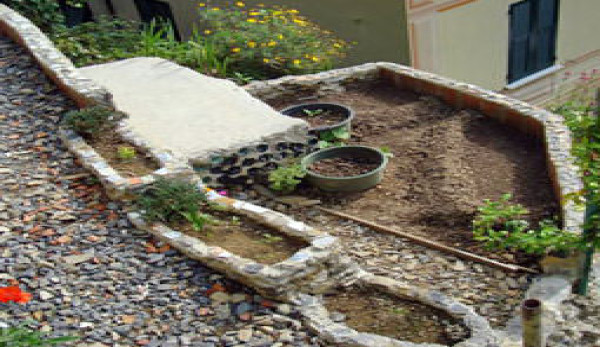 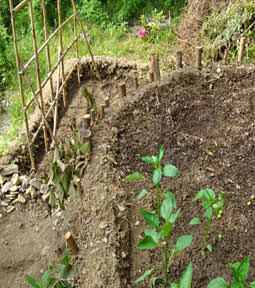 The photo at right shows the new beds I’ve made on the southern border of the garden.

The top bed was made by pounding stakes in a semicircle, weaving branches between the stakes, and packing with cut weeds before backfilling with dirt.

The bottom bed was made by stacking layers of short branches, grassy weeds and sifted soil to form a wall that was then covered with mud stucco.

These garden beds will last for a couple of seasons, hopefully long enough for me to get around to building permanent rock and concrete walls in the same location.

A Gradual Process Will Lead to …
The really good news was that in digging these two beds I discovered a big patch of relatively un-rocky soil.  Having a new dirt source was swell, and I used a bunch of it to backfill the newly finished terrace and beds on the north side, shown in the photo below left. 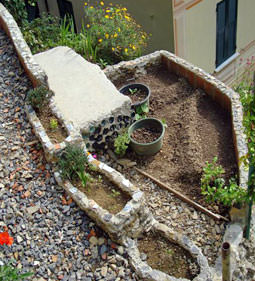 Building a garden on the sunny cliff next to our home was initially a daunting enterprise.

The site is really steep, and there’s way more rocks than dirt. The neighbors watched bemused as I started scrambling on the heights and cutting away the brambles to make the first small planting areas.  I told everybody that I thought I could finish in two years.

… a Good Foundation for the Blooms
I built the first garden beds using the limbs and brush cut from the site to make a sort of woven bird’s nest that would hold some soil and serve as a planting area.

The first year I made a dozen little planting nests, and most of them were about three square feet, which was enough to grow a couple of squashes or tomatoes.

Ha! Okay, so now I’m in the fourth year of building the garden, and I’m still spending more time working to build infrastructure than I am on my horticultural duties.

I did start adding a few blooming plants here and there a few years ago, but I’ll admit that I spend way less time gardening than I wish I did.  The need to build new garden beds is still more urgent than the need to coddle my crops, and I think my crops suffer as a result.

Focusing on construction is the best plan, because the plants do grow better in well-constructed beds.

In all the areas where I’ve built walls to create terraces, the plantable surface area is enlarged considerably, and the soil in the bed is much deeper, meaning that I can grow more and bigger plants.

But still, I’m really looking forward to the day that I have all the beds and pathways built and can concentrate on just growing vegetables and flowers.  Knowing what I know now, I’ll predict that it will take another four years of fairly constant construction to finish the garden structures.  By that time the fruit trees will have grown nicely, and the garden will be ready to enjoy its golden period.  I can’t wait.