While I’m waiting for the soil to dry out so I can prepare the beds for spring planting, I spend time in the garden building a new terrace on the lower part of the cliff. 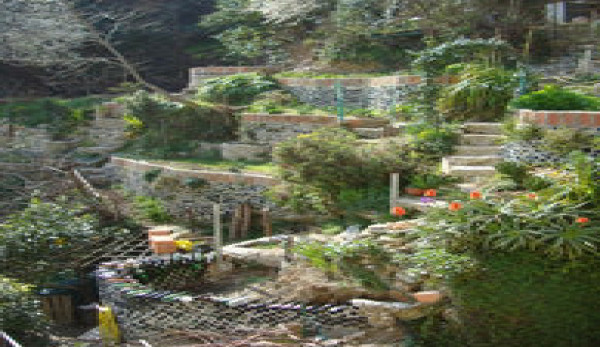 While I’m waiting for the soil to dry out so I can prepare the beds for spring planting, I spend time in the garden building a new terrace on the lower part of the cliff.

Since I use empty glass bottles instead of bricks, the first phase of my projects is always to assemble a huge amount of bottles.  I had stockpiled almost a thousand bottles a month or so ago, so I thought I was good and ready for the construction of the new terrace.

Well, actually, now that the wall is close to completion I know that the project will need even more bottles than I had prepared.  Luckily, there are a whole lot of bottles available to collect, and my neighbors continue to bring me their empty bottles for recycling.

To make the terrace walls, I stack the bottles up in between layers of fresh concrete, keeping the bottle bottoms flush with the outside edge of the wall, and letting the bottle tops stick into the bed area.  The resultant walls are pretty strong even though the concrete is really only about 8 to 10 inches thick in most places.

At key points, where the wall is anchored to the bedrock and at sharp angles, I double the concrete thickness to give extra strength.

Once the walls are built, I put on a row of clay bricks or hollow building blocks that serves as the top edge.  The orange blocks and bricks add a decorative touch that acts as a visual theme and makes a nice sturdy finished edge to the tops of the beds.

Before backfilling the terrace with new soil I usually knock off the bottle necks on the top few rows in order that the bottles closest to the eventual bed surface are about a foot and a half below the surface of the soil, which is well below the normal cultivation depth.

I’ll also knock the fronts out of a few bottles on the top row and fill the space with dirt so I can plant hanging things that will eventually cover big parts of the wall front.

This cliff where the garden terraces are built was too steep to walk on and too overgrown to climb up when I started, but now the scrub is mostly gone and there are a number of nice big flat dirt areas to plant with a network of steps leading up and down the slopes.

The sunshine reflecting on the bottles is attractive and although the plantings are still young and the garden will become better looking in a few years, it is already much nicer than the scrub trees and wild berry vines that used to choke the area.

As usual, no matter how much I build, the garden always seems unfinished to me.  When I look at the garden, the four of five next major projects all appear fairly urgent.  I estimated this construction phase to last two years when I first started the garden four years ago.  These days I estimate another two or three years until the garden really looks spectacular.