How to Handle a Chicken Who Becomes a Bully

An overly aggressive bird can be extremely detrimental to your flock. Here are options for handling a bird who turns into a bully. 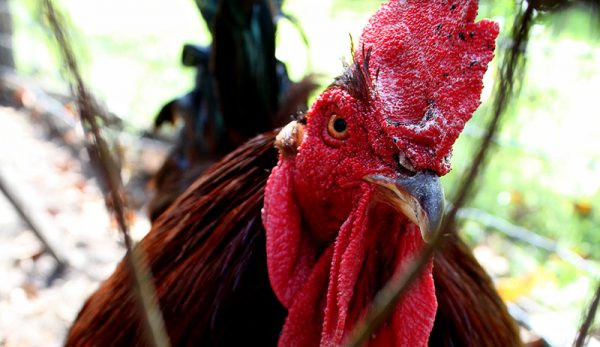 Kathryn loves being a backyard flock owner. She enjoys sitting on her deck, watching the antics of her chickens, especially in late spring when the mama hens have herds of chicks trooping along behind them. At least, she enjoyed watching her birds until this past spring, when Bitsy began terrorizing her flock. She became a bully.

“I don’t know what happened over the winter,” the New Jersey native said. “She was such a sweet chick, and now she’s … not.”

A similar story came from a woman named Virginia, who breeds Speckled Sussex birds in her Florida backyard. She hatched a dozen eggs ordered from a breeder in another state to refresh her flock’s bloodline. She was thrilled when three of the chicks turned out to be cockerels. Then one of the little boys became a bully. Soon, he had his siblings hiding in fear. His aggressive attitude amplified over the summer, when Bully Boy began jumping out of his enclosure and into others. There he’d quickly mount the females and attack the other males.

“My friends tell me to send him to freezer camp,” Virginia said. “But I can’t bring myself to slaughter one of my birds, and how could I sell him in good conscience knowing what he’s like?”

As charming as raising chickens can be, sometimes a proverbial bump in the road throws plans awry. A nuisance bird is one of the biggest bumps a flock owner can experience. Unlike predators, parasites or anything external, this is a homegrown problem. You must deal with it before the rest of the flock is harmed. But how, you ask? If you’re unsure how to handle your nuisance bird, here are five suggestions to help end the troublemaking.

Even thugs have associates, and hooligan chickens are no different. Your bully bird might have a buddy, mate or even a flunkyâ€”some sort of companion that is tolerated, not teased. Identify which bird in your flock can serve as your bully’s companion, one that won’t suffer if it is separated from the rest of your flock. You’ll need to outfit a coop and locate it well away from your main henhouse, so the rest of your flock is out of sight. Set up a sizable enclosure to give the two birds plenty of room to roam, then transfer the pair in. Being in semi-isolation and removing the flock that your aggressor sees as a threat or challenge can go a long way to calming your belligerent bird.

Many feed shops and farm-supply stores host livestock swaps throughout the year. Swaps are tricky territory. Close inspection can tell you whether a bird is sick, crippled, injured, henpecked, old or aggressive. But it does not tell you the bird’s history, and owners are not apt to share the negative background of a bird they’re trying to unload. Frequently, those attending a swap to add to their flock often focus on the gender and breed of a bird and don’t consider its behavioral characteristics. Bringing your nuisance bird to a swap is one way to rid yourself of your problem, but be prepared to explain why you are offering the bird up for swap.

3. Sell the Bird on the Web

Posting your bird for sale on a classified website such as Craigslist is similar to taking it to a swap. Interested buyers might ask why you are selling it. The key difference? Posting an ad with photos is much more convenient than attending an event in person. Be sure to implement biosecurity measures if your potential buyer already owns a flock. Bacteria can be transported to your farm on customers’ clothing and footwear when they come to see your chicken.

4. Offer the Bird as a Gift

If you’d rather not interact with customers or deal with the hassles of selling pugnacious poultry, gifting your bird to someone else might be the way to go. Understand that this means the recipient might do as they please with your chicken, and this might include sending it to freezer camp. If you choose to gift your bird to someone else, especially somebody you know, be completely honest about why you need to rehome the bird. Not being up front with its behavioral issues can cause damage to the recipient’s flockâ€”and to your relationship with that person.

5. Have the Bird Processed

If you can’t bear not knowing what will become of your troublemaker in the hands of anotherâ€”or if you prefer full responsibility yourselfâ€”processing might be the proper solution. Check your local ordinances regarding the slaughter and processing of livestock. Your property might not be zoned to allow for you to do it yourself. If this is the case, locate a company willing to process one bird for you or add your bird to another order. Contact your local extension office for recommendations.

Kathryn chose to separate Bitsy and a friend from the rest of her birds, setting them up in a coop toward the back of her yard.

“It was the best decision I made,” she noted. “Peace has returned to my little kingdom.”

As for Virginia’s Bully Boy, he jumped out of his enclosure one final time, headed out of her yard, and was never seen again. Sometimes a problem resolves itself.