7 Facts You Probably Didn’t Know About the Bumblebee

The bumblebee doesn't make honey, its queen overwinters alone, and it pollinates through a most unusual mechanism. 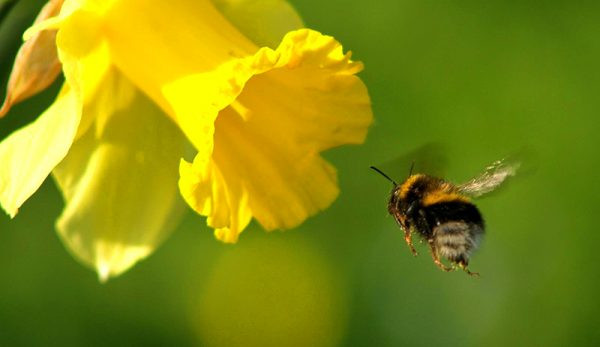 In our region, May is the month we learn whether we’ll have blueberries in the summer. In large part, we owe that service to the bumblebee. While my honeybees search along the grassy floor of our yard for dandelions, it’s the bumblebee that does most of the work pollinating our 18-year-old blueberry bushes. Why is that?

We love and know honeybees for their ability to make honey, and when an animal (or insect) produces something we love, they’re on our radar. But the tireless work of the bumblebee goes unnoticed because its tangible product is largely invisible: pollination.

Here are seven facts about the bumblebee you probably didn’t know:

1. They Vibrate to Pollinate

Bumblebees pollinate, in part, through a method called “buzz pollination.” This occurs because of the rapid rate of their wing motionâ€”more than 130 beats per second. Their vibrating sound and action (which is partly what gives them their bumbly “buzz”) shakes pollen loose from flowers, allowing neighboring blooms to be pollinated.

2. Their Wings Move in Unusual Ways

Bumblebees beat their wings up and down, rather than back and forth. This is the reason they’re able to keep their otherwise hefty bodies in the air on such small wings.

3. Many Types of Bumblebees Exist

There are more than 250 bumblebee species worldwide, including 46 in North America. Species on this continent include Bombus fraternus, Bombus morrisoni and Bombus griseocollis.

4. They Build Nests at Ground Level

Unlike the honeybee (which builds nests above ground in sheltered cavities) or wasps and hornets (which build papering suspended nests), the bumblebee burrows under leaves and ground debris to build its home and raise young.

5. The Queen Feeds the Colony

Honeybees turn nectar into honey and store large amounts for winter. With bumblebees, though, the queen gathers nectar from blooming flowers and stores it in a “nectar pot,” into which she secretes important enzymes. She feeds her young and members of her colony from these nectar pots. Bumblebees don’t overwinter the way honeybees do, so their stores are not created for long-term use.

6. Bumblebee Colonies Are Quite Small

7. In Winter, the Queen Stands Alone

In the fall, all members of the bumblebee colony perish, and only the queen survives and overwinters. After fattening herself up, she burrows in leaf litter or other natural debris and waits out the winter on her own. It is she who begins the new colony in the spring.

You can help bumblebees this time of year in a number of ways. First, don’t spray crops. Next, leave flowering plants that bumblebees seem to enjoy (which is many of them) and allow them to pollinate your garden without interference. Come fall, it’s beneficial to bumblebees (and other helpful insects and pollinators) when you leave a patch of wild or unkempt bit of yard or garden in which they can overwinter. I have an echinacea garden that I leave rather wild in the fall and through the winter. Having the natural cover of decaying and drying annual foliage provides cover for bumblebee queens and protection to other beneficials that awaken in the spring to do their magical work in your garden once again.