The implications of the study’s findings could be serious for both society and economy. 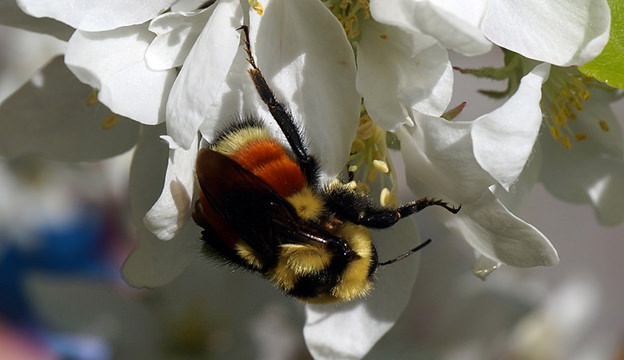 Research on various types of bees and pesticides seems to dominate the news in recent months. The latest is a study in which scientists discovered that bumblebees’ ability to pollinate apple trees is harmed by insecticides. The results, of course, have major implications on agriculture, given that bees pollinate a large number of food crops.

University of Guelph, Canada Professor Nigel Raine was one of the members of the research team and told The Guardian, “Bumblebees are major pollinators of apples and many crops around the world. The findings of this study have important implications for both society and the economy, as insect pollination services to crops are worth at least $361 billion worldwide every year, and are vital to the functioning of natural ecosystems.”

As part of the research, the team “exposed bumblebee colonies to different levels of neonicotinoid found in normal fields and then tested their ability to pollinate apple trees. Compared to unexposed colonies, the exposed bumblebees visited fewer trees and collected less pollen, resulting in apples with one-third less pips. The number of pips is an important sign of pollination success because it is associated with higher quality fruit, which are more valuable to farmers,” The Guardian reports.

The number of apples was not affected; however, the quality was, which means fewer apples would be used and/or sold.

The bees that were exposed to the pesticides took a longer time to forage, but did not yield better results. The research team did not look at why pesticides affected the bumblebees in this way.

The research team conducted the study using a chemical produced by Syngenta. The company’s senior environmental risk assessor, Peter Campbell, told The Guardian, “The conclusion is premature and only representative of a single experiment conducted under artificial conditions.”

Read the study in full in the online journal Nature.