How to Identify and Deal With Bumblefoot in Chickens

Our Black Orpington’s lame foot was caused by more than just stepping on something sharp. Here’s how we dealt with bumblefoot, the crippling poultry condition. 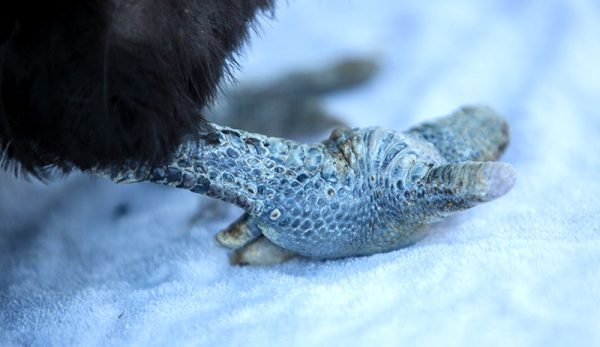 Michigan is renowned for its harsh, snowy winters. That’s mostly why we raise such cold-hardy breeds as Orpingtons and Ameraucanas. Even though these birds are built to withstand the bitter chill, they aren’t cold proof. Frostbite occurs, usually in the points of a single comb or in delicate dangling wattles. Our family works hard to ensure our chickens survive the winter unscathed, but even then, sometimes Jack Frost has his way. This past winter, he had his way with our Black Orpington rooster, Big Boy.

Big Boy is a loner, like the old bull elephant you hear about that lives on its own rather than staying within the protection and comfort of a herd. Big Boy has never shown interest in his companion hens. He stays in his coop rather than ranging in the run or yard, and he rarely eats the kitchen scraps or treats we share with his flock. Because of his quiet, solitary habits, it was several weeks into the warmth of spring before we realized he was missing several toes on his right foot.

The discovery was horrific to me. I tore the coop apart, searching for the cause of the injury but found none. Finally, once Big Boy consented to have his foot examined, I saw that this was no new wound. The tips of two toes, which had blackened and shriveled because of the cold and lack of blood flow, were not only gone but the skin had already healed. Big Boy did his best to retain his dignity as I sniffed, then prodded his foot, checking for signs of infection such as swelling and discharge. Finding none, I carefully cleaned his foot with a disinfectant soap, dried it with a soft cloth, then sprayed it down with Blu-Kote. Sorrowing over his maimed foot, I sternly reminded him that chickens are social animals, then sent him on his way.

The poultry lover in me would like to think that the fluffy Black Orpington took my advice. As spring gave way to summer, Big Boy began spending more time outdoors. While he never roamed and romped like his coopmates, he was out in the sun and fresh air. He even consented to nibble at the sunflower seeds and mealworms we occasionally tossed into his run.

On a weekend home from vet school in late July, my oldest son, Michael, visited our flocks and returned with a puzzled expression. “Something’s wrong with the big black rooster,” he told me. “He’s not walking quite right.” Worried, I headed out to the yard with Michael to watch Big Boy, who of course pooh-poohed my youthful veterinarian by practically marching around right in front of him. Unfazed, Michael examined the rooster. He found only some tenderness in the mutilated foot. We concluded that Big Boy had probably stepped on a rock or something.

Then, in mid-August, I received a worried text Amerie, who, was chicken sitting for us with her husband, Rick. “There’s something wrong with Big Boy,” she noted. “He’s limping around his run.” Remembering Michael’s recent encounter with the solitary chicken, I assured Amerie that we knew about Big Boy’s foot issue and that it was nothing to be concerned about. We were home shortly after that, and Big Boy’s limp was forgotten as the chaos of a new school year overwhelmed our household.

Two weeks later, I was cleaning the coops and opened our main Orpington coop, only to have Big Boy almost tumble out on top of me. Catching him, I chided him for hanging out too close to the human-access door and set him back inside. Big Boy gave me a woebegone look, then turned away and, very noticeably, limped back to the feeder. I immediately dropped my rake and grabbed the rooster again, who squawked at the affront. Sure enough, one foot looked perfectly normal. The other—the one with the missing toes—was the size of a plum. I swiftly photographed the afflicted foot then shipped the photos to Dr. Richard Fulton, a diplomate of the American College of Poultry Veterinarians with more than 30 years experience in poultry pathology (who’s also one of Michael’s professors).

“Sorry about Big Boy’s foot,” he replied almost immediately. “It appears that he has bumblefoot.”

Bumblefoot (or Pododermatitis) is an inflammatory condition in the soft tissues of a chicken’s foot. The chicken ailment is clinically diagnosed in five grades, ranging from a minimally noticeable change in skin texture to a very noticeable limp and crippling deformity. Caught in the early stages, bumblefoot is quite treatable with antibiotics and improved coop sanitation. In acute cases, the infection can spread to the bone, resulting in the death of tissue, bone and quite possibly the bird. Bumblefoot develops very quickly, as we learned the hard way.

Three key factors produce bumblefoot in birds: excessive or uneven pressure exerted on the bottom of a bird’s foot, compromised foot skin, and bacteria. These three combine to create an ideal environment for its development.

Large breeds such as Brahmas, Orpingtons and Jersey Giants—and overweight birds of any breed—are at risk for developing bumblefoot because of the pressure applied to their feet each time they leap down from their perch. Similarly, overly contentious roosters that continually pounce and bound at rivals are also at risk, as the pressure from repetitive jumping can damage their feet. Frequent treading on a coop floor that is uneven from natural dirt contours or from irregular litter distribution can also take its toll on a bird’s foot. So can a poorly designed perch—one with sharp angles, or one that’s either too wide or not wide enough.  The latter forces roosting birds to hold on with varying amounts of pressure.

An English Orpington, Big Boy is already a large bird. I have no doubt that, as he learned how to get around on his maimed foot, he walked unevenly, making a bad situation worse.

All that foot pounding can lead to abrasions and pressure lesions. These skin injuries can remain external or they can serve as portals for bacteria, allowing the germs to invade and infect the inner tissues of the foot. The wounds left by the amputation of Big Boy’s toes apparently left a pathway for bacteria, despite the precautions I had taken.

Many strains of microbes naturally exist on skin. Even if poultry skin were bacteria free, enclosures such as chicken runs and coops are rampant with bacteria. Staphylococcus aureus is most commonly associated with bumblefoot, but other bacteria, including Streptococcus, E. coli and Proteus, have also been associated with bumblefoot. Any of these could have entered through Big Boy’s frostbite injuries to cause the abscess that was affecting him.

Once bumblefoot has been diagnosed, it’s crucial to start treatment as soon as possible. If your hen or rooster shows only mild symptoms, such as pink footpads and shiny, textureless skin, soak your bird’s foot in warm Epsom-salt water or chamomile tea to reduce the swelling. Once dry, apply an antibacterial ointment and wrap the foot with sterile gauze and Vetwrap. “Repeat this treatment twice a day for a couple of weeks to draw the swelling to a head so it can rupture,” instructed Fulton. Once the pus-filled abscess has burst, clean the foot thoroughly with an antibacterial soap and wrap it to keep it as clean as possible. One chicken lover I know fashioned a shoe out of an old pool noodle for her bumblefoot-afflicted rooster to wear as his foot healed.

A dark brown or black scab on the bottom of your bird’s foot signifies that the infection is severe and needs veterinary attention. This hard plug is the necrotizing foot tissue underlying the abscess. As more tissue dies, the plug and the surrounding abscess will grow larger, causing pain, limping and even the inability to use the foot. At this point, the bumblefoot infection might have engaged the bones of the feet, causing osteomyelitis. It can also spread to the bird’s uninfected foot, as is sadly the case with Big Boy: the bottom of his left foot had pink, shiny patches, indicating the beginning of bumblefoot there.

Call in the Experts

Because of the severity of acute bumblefoot, it is absolutely vital to contact an avian veterinarian. DIY treatments might be well intentioned but, without in-depth knowledge of a chicken’s bone, nerve, circulatory and tissue physiology, any attempts to cut out the dead tissue yourself can lead to permanent damage or death to the bird. “Veterinary care is absolutely needed at this stage,” noted Fulton. If you don’t have an avian veterinarian near you, contact your county extension office and say you seek an avian veterinarian who can perform a surgical debridement on your chicken to treat acute bumblefoot.

We are fortunate enough to know several poultry veterinarians who could help us with Big Boy, not counting our son, who had yet to see, much less perform, a surgical debridement. Big Boy is now able to stand and put weight on his disabled foot, which we keep neatly bandaged except for when it’s time for his Epsom-salt soaks. We understand the infection might have already spread systematically through his body to cause endocarditis and arthritis and shorten his life span (he’s only 3). For now, however, he is once again mobile and starting to interact with his flockmates, and that’s a lot better than his condition not too long ago.