Burning Question: Should We Ditch the Humanure Taboo?

We could compost human waste and save trillions of gallons of water each year. The question is: Are we brave enough to try? 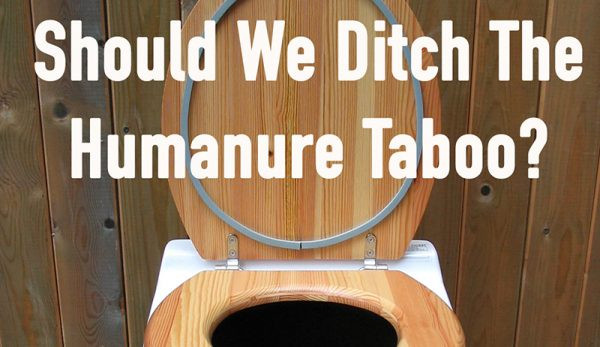 If the drought in the West has taught us anythingâ€”and it has taught us many thingsâ€”it’s that we waste a lot of water. Well not just us, but our houses. According to the EPA, general household leaks from faucets and pipes result in upwards of 1 trillion gallons of water loss each year. An additional 1.2 trillion gallons is willingly squandered through our shower heads. The champion of water waste, though? Our toilets. At 2 to 8 gallons per flush, our toilets use more than 2 trillion gallons of good, fresh, potable water every single year.

So the immediate response has been that we need more efficient toilets, right? While that’s definitely one answer, itâ€™s a relatively pricey one for most of us. What if we just started using less of our drinking water in our toilets and started being smarter about how we dispose of our own waste?

First, I should say I definitely get it. I understand that thereâ€™s something inherently off-putting about the thought of human waste. And perhaps not without reason. The list of diseases associatedâ€”correctly or notâ€”with human manure is lengthy and includes many frightening pathogens, parasites and viruses that none of us want anything to do with. Because of these diseases, which plagued our forefathers and still plague many less-developed countries, the taboo surrounding humanure still lingers heavily in our culture from a time in history when feces were simply thrown out into the street or behind our houses. But is washing our own waste away in a stream of good water the only way to avoid these diseases? It’s one, for sure. But hardly the only.

What if we didn’t wash our waste away, but rather covered the humanure with sawdust, peat moss, wood chips, soil or some other organic material, then composted it? I mean, a cat covers its own manure intuitively and for good reason.

“If it smells bad or looks bad, cover it until it does neither,” writes Joseph Jenkins in The Humanure Handbook (Chelsea Green, 2005).

Not only does covering reduce the smell just as well as (if not better than) washing the feces away, it prevents flies from transferring diseases to your food. Covering is the first step to composting, which invites beneficial microorganisms to start consuming the manure, heating it up and killing pathogens. The resulting mixture of humanureâ€”including urineâ€”and organic matter can then be dumped into a compost pile to be turned into food for plants. But is that safe? Let’s break it down.

Indeed, in urine, there may be some pharmaceuticals, potential pathogens and salts that might need to be managed and could be through proper fermentation, composting, removal and/or proper nutrition by the individual. There are also high levels of nitrogen, phosphorous, potassium, magnesium, calcium and many other important micronutrients, all of which should be cherished. Do a minimal amount of research on fertilizing with urine and youâ€™ll come across no less than 10 studies on how the application of urine is just as effective, if not more so, than chemical fertilizers on everything from beets to corn to lettuce. And in terms of safety, urine is generally considered benign, unlike chemical fertilizers, which are generally and scientifically considered carcinogenic. Which would you really prefer to grow your food then?

Of course, urine isn’t our only valuable waste product. And it’s probably not the one people are most concerned about.

That there is no curse word for human feces in most of Asia says something about how China and surrounding areas value this natural product. And that there is no wordâ€”not “poo,” “poop,” “caca,” or even “human feces”â€”that doesn’t make us blush, says something about the way Americans view humanure. It’s a joke, an insult or a curse word. But we should stop, ahem, poo-pooing this valuable resource?

Sure, our manure is filled with the occasional pathogenâ€”especially when we donâ€™t eat wellâ€”but itâ€™s also filled with the kind of partially digested food that beneficial microorganisms and worms go gaga over. They will rapidly turn it into a rich compost, thus destroying the pathogens and making it useful around fruit trees and other perennial plants. In fact, if composted correctly, the resulting humanure compost can be rendered as safe as any other compost available in a matter of years, thus safe enough to put into your gardens if you so desired. Imagine growing a plentiful garden, eating hundreds of good meals from it, then putting the resulting composted manure back where it came from. What an elegant symbiosis, and one that nature has thrived on for billenia (which should be a word).

Would collecting our own humanure be a logistically easy solution?

Anyone can buy a bucket, some organic matter and a toilet seat, then use that in lieu of the loo. But on a large scale, in tall buildings without yards, people would have to get creativeâ€”communal composting toilets, perhaps, or bucket brigades for hauling the heavy buckets down stairs could be options. That’s idealistic, of course. People are probably more likely to stop showering than to start messing with their own manure.

But before it gets written off, remember our numbers: The toilet uses (or one could say wastes) more than 2 trillion gallons of water a year. If even half of us stopped using the toilet so much, or at least flushing as often, we could save a solid trillion gallons of water, also known as 10 percent of the water needed to bring California out of a drought. (Estimates are around 10 or 11 trillion gallons needed.) Throw in taking less or shorter showers, fixing our leaky faucets, removing our lawns, washing our cars less, and suddenly the West doesn’t look so dry. At an investment of $5 to $10 for a bucket, an old toilet seat and some organic matter, that’s an efficiency toilet just about anyone can afford.