If agricultural trends continue as they have, farming in the mid-century will look quite a bit different. 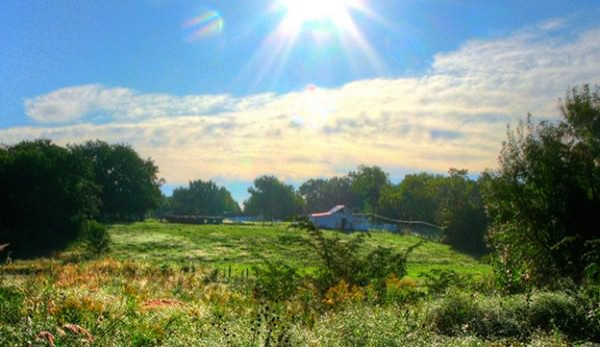 I rarely feel comfortable using an indefinite pronoun, but I can say confidently that no oneÂ knows for sure what 2050 will be like. It’s only 34 years away, and yet it seems like a lifetime. That being said, there are a lot of things weÂ canÂ say with near certainty will come to pass by then. Renewable energy, for instance, may be the energy of 2050. Our population will growâ€”a lot. We might hit 9 billion. Heck, we might blow right past 9 billion. The world will be hotter. The oceans will be higher. And all of this, along with millions of other things we can’t possibly predict, will affect our farms.

Letâ€™s start with 2 billion more mouths to feedâ€”that’s a significant jumpâ€”and the fact that the nation is currently losing 50 acres of farmland to urban sprawl every hour. By that math we could be out as much as 15 million acres of arable farmland by 2050. If the current trend continues, farmers will have to learn to do more with less.

Perhaps the movement toward biointensive farming methodsâ€”currently being revived by the farmers like Jean-Martin Fortier, Elliot Coleman and othersâ€”is good preparation for this future. In fact, I would hardly be surprised to see 1- and 2-acre farms on semi-permanent raised bedsâ€”which seem relatively new nowâ€”become 2050’s version of row cropping.

A Transition To Urban Farming

This jump in population may also mean more food must come from urban areas. Urban farms might be what many grandchildren of millennials think of as farmsâ€”on rooftops, floating on waterways and even in underground warehouses. Sound idealistic? According to the FAO, 70 percent of the worldâ€™s population will be urban in 2050, compared to 49 percent today. So all that sprawl will need fresh food. Whole buildings will likely become agri-structures: “Roof-to-basementâ€ť may be the “nose-to-tailâ€ť of the mid-century.

It is also possible that more neighborhoods andâ€”why notâ€”perhaps whole towns will be set up around farms akin to the “agrihood” trend we are seeing now. Place like Agritopia in Arizona or Serenbe outside of Atlanta couldâ€”and perhaps shouldâ€”become models for sustainable urban development.

Of course, not just farmland but farmers will see a decline. Since 2007, thereâ€™s been nearly a 4 percent drop in farmers. If the trend holds, could we see 28 percent drop by 2050â€”thatâ€™s nearly 600,000 fewer farmers? It would be considerably harder to produce the 70 percent more food weâ€™ll supposedly need with three-quarters of the farmers.

Of course, it’s hard to say what will happen. People are more interested in farming than they’ve been in years. But not in big farming. I have no doubt weâ€™ll have all the vegetable growers we needâ€”it’s the big grain operations where we may see the biggest loss. Then, it’s the meat producers who feed grain who will feel the hit. Then it’s the consumers who can’t afford grassfed meat, of which there very well may be more of, that will feel the difference. But perhaps this is something we and our environment need. We may very well look back on the 20th century as the era of meat, and the 21st as the rise of the vegetable-centric diet.

Meat will still exist, of course, but it will be more economical perhaps to finish it on grass, thus more expensive for the consumer. The type of meat we eat may also shrink from cattle and pigs to goat and rabbits, which are highly efficient and can be scaled to smaller farms and even urban areas. Fish, however, at least on the scale we eat it today, may very well be a thing of the past especially ifâ€”as the UN warned in 2010â€”the oceans of 2050 become fishless. Well, you may argue, we don’t rely on the oceans for all of our fish: Currently, 50 percent come from land-based fisheries. This is true, but those fisheries are part of the problem. They feed fish to fish and are themselves helping deplete our oceans.

That isn’t to say that this is necessarily a bleak future. Unsustainable farming methods will eventually correct themselvesâ€”that’s just nature. Hopefully, though, we won’t get to the fishless oceans or the 24 percent fewer farmers. Hopefully, by 2050, we will have figured out how to eat sustainably, farm sustainably, fish sustainably and offer farmers a sustainable living so fewer will decide to leave the business. Change is gonna come no matter what we do, but if we start soon, with 34 years to go, we can at least work toward the kinds of changes we want and need.