Perhaps the "farm-to-table” movement is fueling the small-farm fire, but maybe it’s not doing enough. 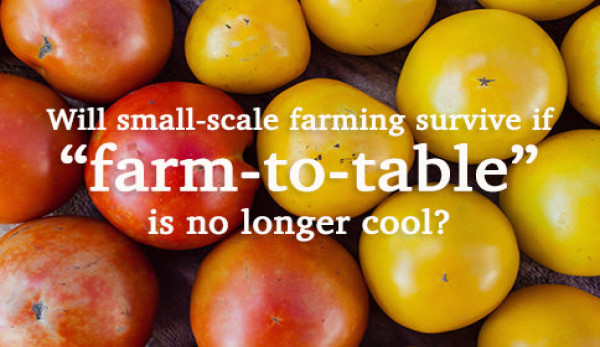 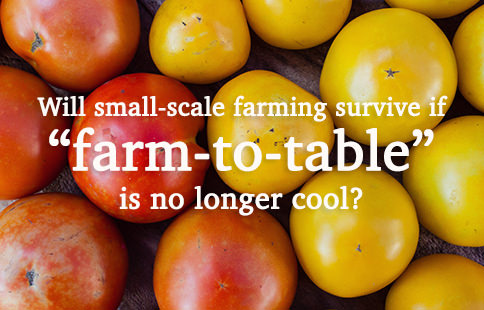 Editor’s Note: “Burning Questions” takes an in-depth look at the hot-button issues facing today’s farmers. The ideas expressed here are not the opinions of Hobby Farms, but of individual farmers and food advocates rooted in the local-food movement. If you have thoughts or opinions about what is expressed here, please contribute them in the comments below. We want to hear from you, too!

It can’t be denied, I suppose, that farm-to-table food has become pretty trendy. In some parts of the country, the trend has long been established. In other places, it is just catching on. We’ve read about it in New York Times bestselling books. We’ve watched documentaries. We’ve eaten at the restaurants with carefully-crafted farm lists on the back of the menus. Many small-scale farms have gotten their start and gone on to thrive in this era of “Know Your Farmer,” a renaissance for local food.

The question is: Will it last? In 20, 50 or a 100 years, will we still be here talking about the farm-to-table movement? Or will it just be taken for granted? “Of course the food is grown locally,” people will say. Or is it possible that all will be forgotten and we will be right back where we started, with a heavily industrialized food system that has been taken from the hands of small farmers and handed back to giant corporations? Can small scale farming survive if farm-to-table isn’t cool anymore?

The truth is that I mull over this question a lot. I mull it over because I live in a place where farm-to-table isn’t yet cool enough. It hasn’t caught on like it has on the East or West Coasts. I live in a town where local ingredients aren’t found on the menus of our restaurants, where politicians don’t see the value of our local farmers’ markets, and where even though we’re surrounded by beautiful farmland, we still get most of our vegetables at big-box stores that bring it in by the truckload from out of state and even out of country.

Here are the results of local food not being cool: Our economy suffers and our diets suffer. We deal with chronic illnesses and high obesity rates. Our tastebuds languish as one of our most popular restaurants in town is known more for the fact that the servers line-dance than the quality of the food.

Here in rural Kentucky, we just don’t yet have the infrastructure, the distribution network, and enough small-scale farmers to make local food work. I’ve run a farmers’ market for two years and my farmers don’t grow enough and don’t have enough outlets to sell their products to make it worth trying to extend their season. Most of our customers can’t stretch their tastes beyond “corns and tomatoes” and don’t want to come to market when those things aren’t in season. (I realize this is not the case everywhere, but I cannot help but form my opinions based on my geography.)

The fact is that conventional farmers and modern transportation have given us the most abundant, most affordable, most convenient food supply in the world. The advancements have been incredible over the last 100 years. We are only now beginning to count the costs of our switch to this type of farming. We don’t yet know all the long-term results of monoculture crops, genetic modification, and the widespread use of chemical pesticides and fertilizers. Even so, many rightfully fear the use of such practices and have gone out of their ways to become farmers who avoid them and consumers who don’t support them.

What I’ve learned is that wanting to support small-scale farmers isn’t enough. As much as I try to eat locally and seasonally in a town with farmers’ markets five months out the year and no co-operatives or year-round CSAs, I can only do so much. Farm-to-table needs to be cooler. It needs to be cooler and it needs to be financially sustainable for those making it happen. I know too many small-scale farmers who aren’t making a profit and frustrated consumers who can’t conveniently get the farm products they want when they want them.

I think for small-scale and environmentally friendly farming to survive, there must be hybridization of practices. Let’s not throw the baby out with the bath water. I think we can reject harmful practices and still embrace some of the same principles that have made conventional farms financially sustainable and have revolutionized the availability of affordable food.

What does this look like? Perhaps it means integration of technology, crop specialization, value-added products or better distribution methods. Maybe it means that government subsidies need to shift away from supporting the big boys to focus on small, sustainable operations. Is it better marketing, more farmer co-ops combining together to nab bigger sales, or finding affordable laborers without exploiting our workers? Is it a focus on prepared foods as consumers increasingly don’t have the time or motivation to cook? I certainly don’t have all the answers, but I hope the conversation will continue with people much smarter than myself.

Can farm-to-table survive? YES. I believe it can, but first we need to learn how to effectively meet the needs of consumers in new and exciting ways. We need to ditch the “us vs. them” mentality—conventional or sustainable, large or small, family-owned or business-operated. Farming is still farming. What can we learn from each other? How can we work together to nourish our population, protect our planet, and feed our hungry? There are many people throughout America who will never care where their food comes from or how it was grown. There are farming operations that will never consider how their growing practices affect the long-term vitality of the soil, water and air. We need major change if we are going to stay vital over the next 20 to 40 years and beyond.Farm-to-table needs to become even cooler before we can start worrying about what happens when it isn’t anymore.

We asked you on social media how you’d answer this question. Here’s what you said:

Ronny Williams The problem with small-scale farming is higher overhead and because of that the price of your product is higher than that produced by mega farms or import. As long as people are willing to pay for quality food that has been produced using safe practices the small-scale farms can make it. If price is all that matters to the consumer then they will eat tainted products grown using questionable practices.

Tom Freedom As long as I can sit at a farmers market or a gas station and sell out of my truck I don’t see small organic farming going anywhere.

Appalachia Kevin Cottrell “Small Scale” will survive through the educated only. Farming today incorporates many specialties to live a comfortable living. The farm for self sufficiency is the easy game. To profit you’ll need be a engineer, a chemist, a mechanic, a MBA, a expert in marketing, expert at utilizing the NET, (amongst a few). The days of till, fertilize, plant, cross your fingers have been gone.

Elisabeth-Anne Mabie Small scale farming does far more than reduce the carbon footprint to deliver goods to market. They also raise a wide variety of plant breeds which adds to the genetic diversity of our nation’s food supply. If genetics has taught us little else, it has taught us that reliance on a single strain is dangerous. Also, as industrialized farming relies on monocropping, the only place people will be able to obtain different varieties and less common produce is from small scale farmers. Though the term may change, I think those that are adaptable to the market will survive.

Jodi Porter If locavore, and farm to table ever became non trendy, small farms would suffer greatly. But, with that said, I don’t think it’s going anywhere, junk food sales are plummeting, and people are waking up to their health!

Deanna Poindexter The people I talk to who are either small scale farmers or support small scale farming are not doing so because it’s a fad but because they genuinely care about the source of the food they feed their families. They will continue to care even when it’s out of style.

Annika Johnson Of course it will survive; while some people just go to a farmer’s market because it’s “cool” at the moment, the people who buy CSA shares or regularly buy eggs or milk from a farm without belonging to a co-op do so for reasons other than being “cool.”

Bea Jones There have always been people who either grew their own or bought from local farmers and producers. The “small-scale farming” fad, like the “organic” farming fad, will pass, as finances, speed, production, and availability, as well as changing outside interests, of the consumers dictate. People who, for example, find out that cow and chicken manure are used (and are fearful of contamination) for ‘organic’ farming, disease scares like salmonella and listeria, or even bird flu, mad cow, or hoof-and-mouth disease, will cause people to fall away – as will their personal loss or increase of income, jobs, or financial stability. Some will do what they have always done, most will eventually fall away. [shrug] It doesn’t matter to those of us who have always done it, even before it was “cool.”

Join the conversation below!

Jamie Aramini is a freelance writer and founder of Sustainable Kentucky, a website devoted to the green movement in the Bluegrass State. She is an avid gardener, mother of two and a farmers market manager. In 2015, she opened a local food store to connect local farmers and consumers in her community.